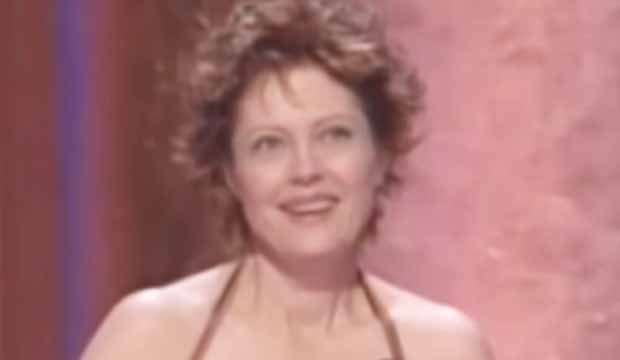 It was the year of fresh faces, surprise wins, tear-inducing moments, battling pigs and Sharon Stone making Gap red-carpet worthy, all of which added up to one of the most well-received Oscar ceremonies of the past 30 years. Out of 24 categories, an outstanding 15 winners were first-time nominees. Whoopi Goldberg helmed the 68th Annual Academy Awards ceremony on March 25, 1996, and earned rave reviews after a lackluster previous year.

The year prior, David Letterman‘s hosting was met with largely negative reviews, so the Academy brought in legendary music producer Quincy Jones to liven things up, and it was he who picked Goldberg. This was the comedienne’s second time to host, having done so two years prior (she would host again in 1999 and 2002), and she managed to honor the nominated films, while also getting laughs with subtle digs – beginning with her opening remark, “So, did you miss me?” The “mighty afro-deity” also managed to be elegant and classy, while also memorably bantering with Miss Piggy, who hijacked Babe the Pig’s satellite feed.

“Babe” was one of the five films up for Best Picture in a highly contested race. It was an unusual year in which TWO Best Picture contenders failed to earn a spot in the Best Director category, and a year in which the precursor award shows didn’t accurately foreshadow the winners. “Apollo 13” came into the night with nine nominations and had won Best Picture at the PGA Awards. Ron Howard had won the Directors Guild Award as well; however, neither he nor Ang Lee (“Sense and Sensibility”) received a Best Director bid to go with their films’ Best Picture nominations. Miramax heavily campaigned for “Il Postino: The Postman,” which picked up five major nominations, including Best Director and Best Picture, becoming the fifth foreign language film to receive a Best Picture nod. Director Chris Noonan claimed a spot for “Babe,” while the other two spots went to Mike Figgis for “Leaving Las Vegas” and Tim Robbins for “Dead Man Walking.” But, in a surprise twist, it would be the fifth time an actor-turned director would win a Best Director Oscar, and he would claim the top prize as well.

Mel Gibson joined fellow actors Robert Redford, Warren Beatty, Kevin Costner and Clint Eastwood with his Best Director victory for “Braveheart,” winning for his second directorial effort and on his first nomination. Gibson’s epic led in nominations with 10, and at the end of the evening, Sidney Poitier presented Gibson and his co-producers with the Best Picture statue as well. However, the only other wins for the movie were Best Cinematography, Best Sound Effects Editing and Best Makeup. “Braveheart” failed to score any other major wins, and is one of the few Best Picture winners to lose for screenplay. And as star of the film, Gibson failed to earn a Best Actor nod; in fact, “Braveheart” was the ninth of only 12 films in Academy history to claim the top prize without having any acting nominations. In fact, NONE of the acting winners came from Best Picture nominees.

This was the first year since 1942 – and the last – that none of the acting winners came from a Best Picture contender. It was an odd mix of performances which won – a conniving thief, a prostitute, a suicidal alcoholic and a nun. All of the winners were first-time winners, and three of the four had received their first nominations – actually, out of 20 acting nominations, 15 individuals received their first nominations, with all the nominees in the supporting categories receiving their first acting nominations that year. Kevin Spacey won his first Oscar in the Supporting Actor category for playing the deceitful Verbal Kint in “The Usual Suspects” (he would win in the lead category four years later for “American Beauty”). He beat out two actors who received their only nominations to date, James Cromwell (“Babe”) and Tim Roth (“Rob Roy”). Ed Harris received his first career nomination for “Apollo 13,” and went on to receive three more nominations over the next seven years. Brad Pitt, received his first nomination in 1996, for his role in “Twelve Monkeys.”

Nicolas Cage won Best Actor on his first of two career nominations, earning a trophy for his portrayal of a depressed writer who drinks himself to death in “Leaving Las Vegas.” He beat out two previous winners, Richard Dreyfuss (“Mr. Holland’s Opus”) and Anthony Hopkins (“Nixon”), as well as Sean Penn, a future two-time winner who received his first nomination that year for “Dead Man Walking.” The fifth slot went to Massimo Troisi, who received a posthumous nomination in this category as well as the Best Adapted Screenplay category for “Il Postino: The Postman.”

Susan Sarandon finally claimed victory on her fifth nomination, winning Best Actress for her portrayal of spiritual advisor Sister Helen Prejean, beating out Elisabeth Shue for “Leaving Las Vegas” and Sharon Stone for “Casino.” Although Stone lost, she won the red carpet by turning a Gap shirt, Valentino skirt and Armani tuxedo dress jacket into one of the most iconic Oscar ensembles of all time. Like Cage, Sarandon also beat out two previous winners, Meryl Streep, who received her 10th of 21 nominations for “The Bridges of Madison County,” and Emma Thompson, who received her fourth, and to date last, acting nomination – however, she did not walk away empty-handed that night.

With a win for Best Adapted Screenplay for “Sense and Sensibility,” Thompson became the first person to win for both writing and acting, as she had won Best Actress for Howard’s End in 1992. This was the only win out of seven nominations for the Jane Austen adaptation. Christopher McQuarrie only had one screenplay to his name before “The Usual Suspects,” but this thriller won him his (to date) sole Oscar nomination, as well as the win for Best Original Screenplay – despite the fact that he wasn’t even nominated for a Writers Guild Award. This was also the first year that an animated film received a screenplay nomination, as the original “Toy Story” snagged a bid in this category.

Although “Toy Story” is one of the most beloved films of all time, it would be another six years before the Best Animated Feature category would be established, and it lost all three of its competitive bids that night. Despite nominations in the categories Disney usually dominates, Best Original Song (“You’ve Got a Friend in Me”) and Best Original Score, it was in competition with another Disney film, “Pocahontas,” which won both of those categories, with “Colors of the Wind” named top song.

Another aspect that made this Oscar broadcast a little more interesting is that some of the categories that are usually soon forgotten brought some of the most memorable moments of the evening. The winner for Best Documentary was “Anne Frank Remembered,” which includes interviews with Miep Gies, the woman who helped shelter the Frank family and who saved Anne’s diary. When producer Jon Blair accepted his trophy, Gies stood at his side, with the audience giving her a standing ovation. Similarly, the Best Documentary Short Subject went to “One Survivor Remembers,” which recounts the ordeal of Holocaust survivor Gerda Weissmann Klein. After producer Kary Antholis finished his speech and the orchestra began to play the music, Klein stepped up to the microphone, and gave a powerful speech: “I have been in a place for six incredible years, where winning meant a crust of bread and to live another day. Since the blessed day of my liberation, I have asked the question, ‘Why am I here? I am no better.’ In my mind’s eye, I see those years and days, and those who never lived to see the magic of a boring evening at home. On their behalf, I wish to thank you for honoring their memory. And you cannot do it in any better way than when you return to your homes tonight to realize that each of you who know the joy of freedom are winners. Thank you on their behalf, with all my heart.”

These weren’t the only heart-wrenching moments. The previous year, “Superman” actor Christopher Reeve had been paralyzed in a horse-riding accident, and made a surprise appearance at this ceremony. After a 60-second standing ovation, Reeve joked, “What you probably don’t know is that I left New York last September, and I just arrived here this morning.” He then moved on to beseech filmmakers to make films that “present painful but important issues to the public,” before presenting a montage of films that brought awareness to social issues.

Two months after suffering a severe stroke, 79-year-old Kirk Douglas received an Honorary Oscar. Steven Spielberg presented, noting not only Douglas’s contributions to film, but also his efforts to end the Hollywood Blacklist. Douglas had never won a competitive Oscar despite three nominations, and was able to thank the Academy despite speech impairments that resulted from his stroke. Robin Williams presented two special awards. The first was an Honorary Oscar for Warner Bros cartoonist and previous Academy Award winner Chuck Jones. The second went to “Toy Story” director and cowriter John Lasseter for “the development and inspired application of techniques that have made possible the first feature-length computer-animated film.”