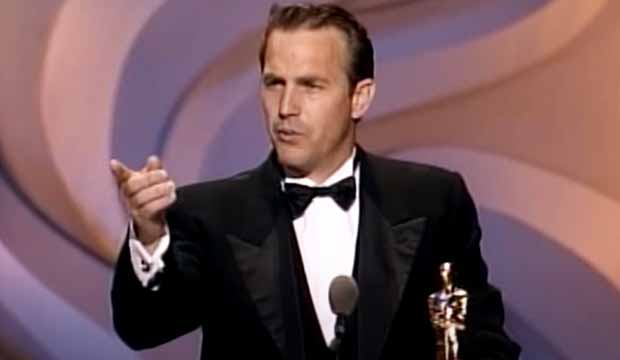 The 63rd Academy Awards took place on March 25, 1991. For the first time in 60 years, a western took home the big prize, a first-time director beat out a veteran, the acting awards were split among four different films and an 80s pop idol caused a sensation. For the second consecutive year, Billy Crystal hosted the event, opening the night by riding in on a horse, which was most likely a plug for his upcoming film “City Slickers,” but also seemed to foreshadow the theme for the evening.

“Dances with Wolves” became the first western since “Cimarron” 60 years earlier to win Best Picture. Kevin Costner‘s epic adventure came into the night with the most nominations at 12, and walked away with the most statues at seven. Costner holds the very rare distinction of landing both a Best Director and a Best Actor nomination for the same film, while his win in the directing category makes him one of only six men to win for his directorial debut. Despite the love awarded this film, it was an unusual year with an odd mix of films to choose from, and many feel that this was a year in which the voters didn’t get it right.

With our Oscar flashback to 30 years ago, it’s hard to believe that “Goodfellas,” which is considered one of the best gangster films ever made, lost. Established director Martin Scorsese had also been defeated 10 years earlier for another film now considered a classic, “Raging Bull.” “Goodfellas” was his third nomination, but he failed to win in both the directing and adapted screenplay categories (“Wolves” snagged that honor as well, with Michael Blake winning for adapting his novel). The lone win out of six nominations was for Best Supporting Actor. Surprisingly, Joe Pesci won for his portrayal of the loud-mouth, quick-tempered Tommy DeVito, and gave what may very well be the shortest Oscar acceptance speech in the history of the Academy: “It was my privilege. Thank you.”

The other three films competing in the top category were the biopic “Awakenings,” which received no wins out of three nominations; “The Godfather: Part III,” the last of a trilogy that did not live up to its predecessors, winning none of its seven nominations; and the surprise hit “Ghost,” a fantasy romance which managed to garner five nominations, winning two. Bruce Joel Rubin won for his original screenplay, and Whoopi Goldberg won Best Supporting Actress for her role as an eccentric psychic. She was the second African-American actress to win an Oscar, the first being Hattie McDaniel over 50 years earlier, and would eventually become the only Black woman to date to achieve the EGOT.

Surprisingly, neither the Best Actor nor the Best Actress winner came from a Best Picture nominee. Jeremy Irons won for his role as the cold aristocrat Claus von Bulow in “Reversal of Fortune.” Kathy Bates was a surprise winner for her portrayal of the overly enthusiastic fan Annie Wilkes in “Misery.” This was a first win in that category for the horror genre, this was Bates’ first major film role and she beat established actresses Anjelica Huston (“The Grifters”), Julia Roberts (“Pretty Woman”), Meryl Streep (“Postcards from the Edge”) and Joanne Woodward (“Mr. and Mrs. Bridge”).

Those weren’t the only surprises of the night, though. The Queen of Pop, Madonna, arrived on the red carpet with the King of Pop, Michael Jackson, on her arm, setting the gossip columns abuzz. Then she performed the original song “Sooner or Later (I Always Get My Man)” from “Dick Tracy,” dressed in a long white dress from designer Bob Mackie and a diamond necklace from Harry Winston. Inspired by Marilyn Monroe, she sashayed about the stage in her form-fitting gown, infusing the evening with old Hollywood glamour. Stephen Sondheim won for the song, which was one of three wins out of seven nominations for “Dick Tracy” – the first comic book film to receive such acclaim from the Academy.

Speaking of old Hollywood glamour, two legendary actresses received Honorary Oscars. Myrna Loy‘s career spanned 60 years, from the earliest days of silent films to the 1980s, and is perhaps best known as Nora Charles from “The Thin Man” series. She had never received a nomination throughout her prestigious career, and the Academy rectified that wrong. Italian actress Sophia Loren was the first actor or actress to win an Oscar for a foreign-language performance, and the Academy honored her accomplishments with an Honorary award.