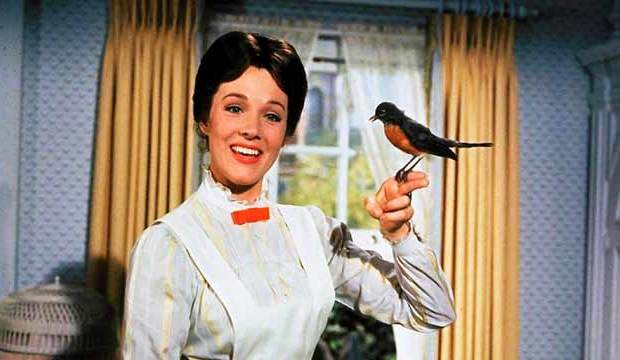 “My Fair Lady” vs. “Mary Poppins.” Audrey Hepburn vs. Julie Andrews. It could have been the biggest rivalry in Academy history, but with two of the classiest stars and two beloved musicals involved, this “rivalry” has just become a memorable side note to the 37th annual Academy Awards. The ceremony, which took place April 5, 1965, also saw a few firsts for the awards show. But when it came right down to it, Andrews got her sweet revenge (in spoonful of sugar style)!

Although it’s become one of her most iconic roles, Hepburn was a controversial choice for the role of Eliza Doolittle in “My Fair Lady.” Producer Jack Warner (reluctantly) kept much of the Broadway cast for the film version, but opted not to cast stage star Andrews, who originated the role of Eliza. He chose Hepburn based on her star power (hoping to recuperate the enormous cost of production), then against her wishes, had her voice dubbed by Marni Nixon.

Fortunately, another producer saw the star potential in Andrews; Walt Disney snatched her up and cast her as the magical nanny “Mary Poppins.” Despite the fact that “My Fair Lady” received an outstanding 12 nominations, the backlash from Warner’s casting decision, combined with the fact that he would not allow her to use her own singing, cost Hepburn an acting nomination. However, Andrews received a Best Actress bid for her film debut, stirring up rivalry rumors between the two women. All eyes were on the two ladies that evening, but when Andrews took home the Best Actress prize (presented by Sidney Poitier), both handled the supposed “rivalry” with grace and were always very complimentary of each other’s performance.

With 13 nominations, “Mary Poppins” actually topped “My Fair Lady,” whose 12 bids tied with “Becket,” making it the first time in Oscar history that more than two films received 10 or more nom and the only time three films have received 12 or more. Despite the supposed Hepburn snub, “My Fair Lady” was the big winner of the night, ending with a total of eight statues, including the Best Picture prize and a first-time win for legendary director and five-time nominee George Cukor. “Mary Poppins” was not far behind with five wins, but “Becket” only triumphed for its adapted screenplay. “Dr. Strangelove or: How I Learned to Stop Worrying and Love the Bomb” and “Zorba the Greek” were the other nominees in the top category.

Andrews’ “My Fair Lady” Broadway co-star Rex Harrison won Best Actor for the film version of the musical. His film co-star Hepburn presented his award, and as the camera panned several times to his on-stage mate Andrews in the audience, he very graciously expressed his “deep love to two fair ladies.” Not only were both Best Actor and Actress from Great Britain, but for the first time in Academy history, all four acting winners were non-American. The supporting winners were fellow Brit Peter Ustinov for “Topkapi” and Russian actress Lila Kedrova for “Zorba the Greek.” In fact, there were so many non-Americans nominated in the acting category that host Bob Hope quipped that it was “Santa Monica on the Thames.” Among the 12 non-Americans were Italian Sophia Loren for “Marriage Italian Style,” Mexican Anthony Quinn for “Zorba the Greek” and Welch actor Richard Burton for “Becket.”

Andrews and Hepburn weren’t the only legendary women of cinema to brighten this awards ceremony. This year, Renee Zellweger is a frontrunner for Best Actress for her portrayal of singer Judy Garland in “Judy.” But at that ceremony over five decades ago, the great entertainer herself performed, honoring composer Cole Porter, who had died the October before. Garland belted out a seven-minute melody of his most memorable songs.