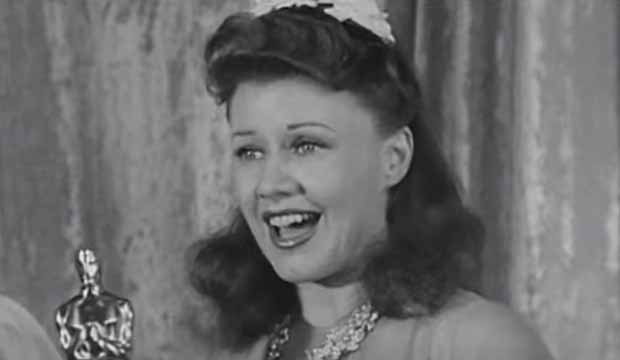 We recently did an Oscars flashback 70 years to the 23rd Academy Awards ceremony, and now we go back a decade more to the 13th ceremony, which was held on February 27, 1941, and would be the last ceremony before the United States’ entry into WWII. It was a year of many firsts that remain part of the ceremonies, a year of historic firsts in the competitive categories and a year that recognized many icons of cinema, although it’s astounding to learn that some of these individuals never won a competitive Oscar.

This was the inaugural year for sealed envelopes, with the identity of the winners kept secret until their names were called, prompting the now famous phrase, “May I have the envelope, please?” This was also the first time in Academy history that a producer won the top prize back to back.

The previous year, David O. Selznick had triumphed with “Gone with the Wind,” and he campaigned hard to snag another statue with “Rebecca.” It would be another four years before the five-movie limit would be instituted, so there were 10 movies nominated for “Outstanding Production,” and he had some stiff competition. In the end, he did indeed claim victory, but the film only won two of its 11 nominations, with the other being for Best Cinematography, Black and White. This would be the last time a Best Picture winner didn’t also win for either directing, writing or acting. “Rebecca” was director Alfred Hitchcock‘s first American-made film, and would be the only one of his productions to be named Best Picture. Hitchcock also received his first of five Best Director nominations; remarkably, he never won, and would have to settle for the Irving G. Thalberg Memorial Award in 1968. He was one of five legendary directors nominated that night, and shared a special distinction with two of his fellow nominees.

The five men up that night are some of the most celebrated directors in the history of the cinema, with an outstanding 30 nominations and eight wins among them. One holds the record for most nominations, and another, the record for most wins. William Wyler received his third out of 12 career nominations for “The Letter” (he would eventually win three), and currently holds the record for nominations in this category; Martin Scorsese is hot on his heels with nine. George Cukor received his second of five nominations, for the “Philadelphia Story,” and would eventually win on his last nomination 24 years later. Sam Wood, up for “Kitty Foyle,” earned his second of three career nominations, but, like Hitchcock, never took home a statue. The winner that night was a man who won four out of five career nominations, eventually becoming the most honored director in the history of the Academy. John Ford received his second statue that night, for “The Grapes of Wrath.” Hitchcock, Wood and Ford also each have the distinction of helming two films in the Best Picture race, each of which had six nominations, but no wins. Their other entries were “Foreign Correspondent” (Hitchcock), “Our Town” ( Wood) and “The Long Voyage Home” (Ford).

The acting races were just as impressive, with some of Hollywood’s Golden Age legends hoping to hear their names called. Charlie Chaplin was up for his first competitive Oscars, earning Best Actor, Best Original Screenplay and Best Picture nominations for his first “talking picture,” “The Great Dictator,” but that film lost all five of its categories. The only competitive Oscar Chaplin ever won was for Best Original Dramatic Score for “Limelight.” With his great filmography, it’s surprising to learn that Henry Fonda‘s nomination for “Grapes of Wrath” was not only his first, but would be his only nomination for 41 years, when he’d win for “On Golden Pond” (1981). He did receive a shared nomination for Best Picture for “12 Angry Men” (1957), but somehow missed out on an acting nomination for that incredible performance. The Academy had just begun its love affair with Laurence Olivier the year before, and he received his second consecutive nomination for his role in the Best Picture winner “Rebecca.” He lost that year, but would eventually rack up a total of 11 competitive Oscar nominations for acting, directing and producing, and would win his Best Actor statue in 1949. Raymond Massey received his sole nomination for what would become his signature role, “Abe Lincoln in Illinois.” Out of all these performances, which are considered among the best of these actors, it was James Stewart who triumphed that evening, for his role in the screwball comedy “The Philadelphia Story.” Many have theorized this was to compensate for his loss the year before, when he arguably should have won for “Mr. Smith Goes to Washington.” Nonetheless, this would be Stewart’s only competitive win, despite three more nominations. Stewart, Chaplin, Fonda and Olivier would also all receive Honorary Oscars in the years to come.

The Best Actress category was just as chock-full of can’t-miss performances for cinephiles, with two of the most honored actresses of all time in competition. Bette Davis had already won what would end up being her only two Oscars, but she continued to earn nominations, earning a total of 10 Best Actress nominations between 1935 and 1963. Her performance in “The Letter” was her fifth overall nomination, and her third of five consecutive nominations (she was the first and one of only two performers to accomplish this feat). Katharine Hepburn was also a previous winner, and her nomination for “The Philadelphia Story” was her third of 12 Best Actress nominations. She went on to win three more statues, and remains the performer with the most acting wins. Joan Fontaine received her first of three nominations for her performance in “Rebecca,” and would go on to win the next year for another Hitchcock film, “Suspicion.” The final two competitors both received their sole career nominations – Martha Scott for “Our Town” and Ginger Rogers for “Kitty Foyle.” Known more for comedic roles and her musical pairings with Fred Astaire, Rogers claimed victory, winning for one of her few dramatic parts that displayed her versatility.

Over in the supporting categories, prolific character actor Walter Brennan made Oscar history by becoming the first performer to win three acting trophies, and remains the only male to win three in the Best Supporting Actor category, this time for “The Westerner.” With the exception of Brennan and Marjorie Rambeau (“Primrose Path”), every performer in both the supporting acting categories received their sole career nominations this year. Rambeau lost the Supporting Actress statue to Jane Darwell, who earned the second of two wins for “The Grapes of Wrath” for her iconic portrayal of Ma Joad.

Another first for the Academy this year was made by a little film that is still well loved 80 years later. “Pinocchio” became the first animated feature to win a competitive Oscar. In fact it won two, for Best Original Score and Best Original Song. The latter is one of the most well-remembered and most loved Best Song winners of all time, and is still very much a part of Disney culture, “When You Wish Upon a Star.” “Pinocchio” and another film were also the first productions not nominated for Best Picture to win multiple awards.

The fantasy film “The Thief of Bagdad” won three awards out of four nominations, becoming the first film not nominated for Best Picture to win the most awards of the night. The only of its nominations it lost was to “Pinocchio” for Original Score; the visually stunning film took home Best Color Cinematography, Best Color Art Direction and Best Visual Effects.

This was also the first year in which an American president participated in the ceremony, as Franklin D. Roosevelt gave a six-minute address via direct-line radio to the gathering. And this was the second year in a row that legendary Oscar host Bob Hope reigned over the event; he would eventually host or co-host the ceremonies a total of 19 times between 1940 and 1978. His favorite jokes often centered around the fact that he was never nominated; however, the Academy did bestow upon him four Honorary Oscars, as well as the Jean Hersholt Humanitarian Award, and he remains the person with the most Honorary Oscars. The first of these was a silver plaque presented to him this evening, in recognition of “his unselfish services to the Motion Picture Industry.”