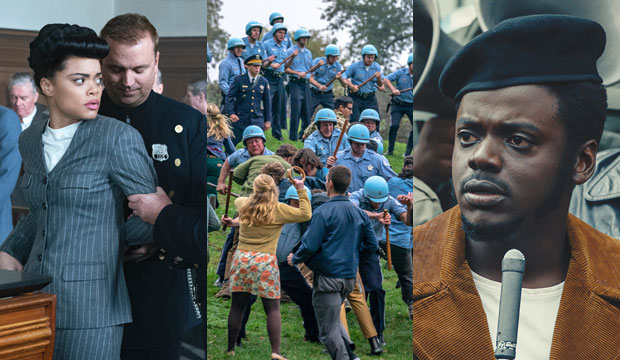 Remember when the 2014 docudrama “Selma” came up surprisingly short at the Oscars, only earning nominations for Best Picture and Best Original Song and nothing for writing, directing or acting? Star David Oyelowo, who played Martin Luther King Jr. in that film, came forward to say that Oscar voters rejected the film because the cast and crew wore “I Can’t Breathe” shirts to protest police brutality. What a difference six years makes. In the wake of yet more instances of police violence, there are numerous films in the awards conversation questioning whether cops should really be the heroes of all our narratives.

SEE‘Judas and the Black Messiah’ producer Charles D. King on the ‘divine’ timing of telling this story amid the BLM movement [EXCLUSIVE VIDEO INTERVIEW]

The “Selma” team was protesting the murder of Eric Garner by NYPD officers, who choked him to death for allegedly selling loose cigarettes while he told them he couldn’t breathe. That incident was captured on video, leading to widespread protests. Then in 2020 it was also recorded when a Minneapolis police officer kneeled on the neck of George Floyd until he died. That combined with the murder of Breonna Taylor by Kentucky police while she was in her own bed earlier in the year launched another protest movement, one that extended beyond just the policing we see in the real world.

Many citizens see policing mostly through the lens of pop culture, where TV shows and movies have constantly told good-versus-evil stories with heroic police at their center — everything from “The French Connection” to “Brooklyn Nine-Nine.” So the latest Black Lives Matter protests raised questions of whether Hollywood bears some responsibility for the impunity that the police enjoy when it comes to their use of force. Who would have thought that the debate would come so quickly to the Oscars? In the months since Floyd’s death in May, several films and TV programs that had already been in production were released that seemed to eerily speak to the present cultural moment.

SEEFrank Langella (‘The Trial of the Chicago 7’): Judge Hoffman was ‘as big a son-of-a-bitch as I’ve ever seen’ [EXCLUSIVE VIDEO INTERVIEW]

Aaron Sorkin‘s “The Trial of the Chicago 7” tells the true story of Chicago protesters who were brutalized by police and then prosecuted in a sham trial meant to make an example out of them. That was especially relevant to the Black Lives Matter movement, where many police responded to protests against police brutality by committing more police brutality. Both “Chicago 7” and Shaka King‘s “Judas and the Black Messiah” also address how Chicago police and the FBI targeted the Black Panther Party and ultimately assassinated chairman Fred Hampton (played by Kelvin Harrison Jr. in “Chicago 7” and Daniel Kaluuya in “Judas”).

That wasn’t the only Black activist targeted by our own federal law enforcement. Lee Daniels‘s “The United States vs. Billie Holiday” highlights how the FBI persecuted the title singer (Andra Day) after her song “Strange Fruit” drew uncomfortable attention to the horrors of lynching in the American South. The documentary “MLK/FBI” explores, as “Selma” touched on a few years ago, how the FBI spied on and tried to discredit Martin Luther King. Other documentaries like “Time” and “40 Years a Prisoner” address the inequities in the criminal justice system. “One Night in Miami” depicts Malcolm X (Kingsley Ben-Adir), who was also surveilled by law enforcement. Even “Ma Rainey’s Black Bottom,” which isn’t focused on policing, has a scene where the title singer (Viola Davis) is confronted by a racist cop after a fender-bender.

It’s not just at the Oscars where awards voters could confront the legacy of policing. HBO’s “Lovecraft Country” told the story of racism in the Jim Crow era amid supernatural monsters — but the scariest monsters weren’t the supernatural ones. And it’s not just in the United States either. Steve McQueen‘s “Small Axe” anthology series on Amazon explores how racist policing has also afflicted Black communities in the UK.

These certainly aren’t the first awards contenders that have addressed police misconduct in recent years (see also: “Fruitvale Station,” “When They See Us” and “Watchmen“), but I wonder if this influx of stories that re-examine our relationship with law enforcement might represent a larger shift in how the media portrays that particular institution. It might be harder to tell unquestioningly heroic stories about the police in the future. If nothing else, I’d hope that fewer academy members would feel comfortable accusing filmmakers of “stirring shit” for speaking out against the extrajudicial executions of Black people, especially now that we’re seeing more and more of the historical context for it on screen.