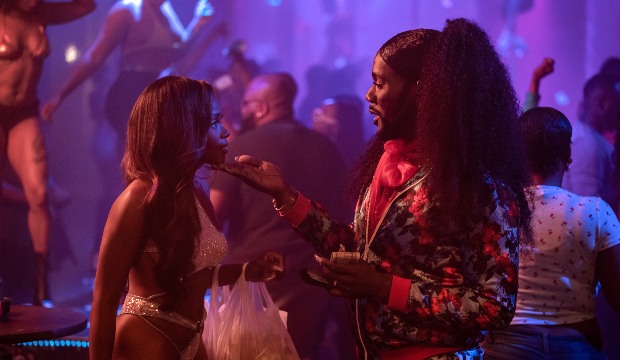 “P-Valley” is the Starz network’s big push at the 2021 Emmy Awards in the Best Drama Series category. The eight-episode first season premiered last summer to “universal acclaim” per review aggregate Metacritic and a perfect approval rating on Rotten Tomatoes, where the critical consensus is summed up, “A stunning, lyrical piece of neon noir, ‘P-Valley’ explores the unseen lives of strippers in Mississippi through Katori Hall‘s singular gaze, celebrating the beauty of the craft without sugarcoating the challenges.”

The Independent Sprit Awards nominated Nicco Annan for his scene-stealing performance as nonbinary strip-club owner Uncle Clifford in their inaugural Best TV Actor category after he topped The Hollywood Reporter‘s list of The Best TV Performances of 2020. The Satellite and Gotham Awards nominated the show itself for Best Drama Series and Best Breakthrough Series (Long Form) respectively.

Ahead of production on its ordered next season, Gold Derby chatted with six of the key creatives who made the eight episodes that have aired thus far (watch by clicking the five links below):

Will “P-Valley” score Emmy nominations? Make your predictions at Gold Derby now. Download our free and easy app for Apple/iPhone devices or Android (Google Play) to compete against legions of other fans plus our experts and editors for best prediction accuracy scores. See our latest prediction champs. Can you top our esteemed leaderboards next? Always remember to keep your predictions updated because they impact our latest racetrack odds, which terrify Hollywood chiefs and stars. Don’t miss the fun. Speak up and share your huffy opinions in our famous forums where 5,000 showbiz leaders lurk every day to track the latest awards buzz. Everybody wants to know: What do you think? Who do you predict and why?