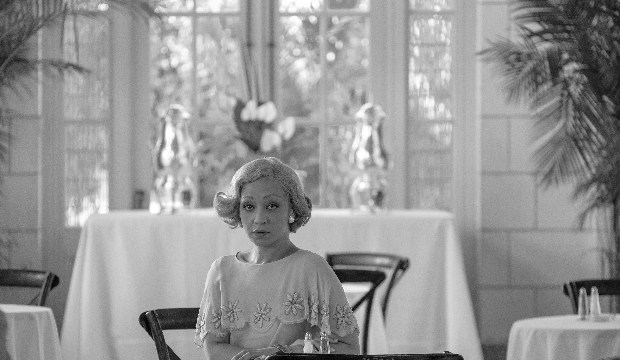 Racial passing occurs when a member of one racial group is either believed to be or accepted as a member of another.  In the U.S., it generally means someone who is Black or of multi-racial heritage, “passing” as a White person.  It’s the subject of Rebecca Hall’s well-received directorial debut “Passing,” currently streaming on Netflix. Hall, who is the daughter of the late director Peter Hall and opera singer Maria Ewing is of Dutch, Native American, African American and Scottish heritage. She adapted Nella Larsen’s 1929 novel about two African American friends: one (Tessa Thompson) is married to a prominent doctor and the other (Ruth Negga) has passed for white for years and is married to a wealthy racist (Alexander Skarsgard). Hall was nominated for the Grand Jury Prize dramatic at Sundance; “Passing” currently is nominated for five Gotham Awards including Best Picture and Breakthrough Director.

Racial passing as long been a cinematic subject matter, though, usually White actors played light-skinned character living life as a White person. The reason? Miscegenation. And in fact, films often ran into trouble with the production code and censors because of miscegenation. Here’s a look at some classic films that explored this then-controversial subject matter

“Imitation of Life” (1934, 1959)
Fannie Hurst’s popular four-hankie weepie novel was adapted in 1934 and 1959. In the 1934 version, Claudette Colbert play a widow with a young daughter struggling to keep up her husband’s business door-to-door who begins a successful business with her Black housekeeper (Louise Beavers) who has a light-skinned daughter. Beavers’ daughter, though, doesn’t want to be considered black and as she becomes an adult, passes as white and even denies her mother. In 2007, Time listed “Imitation of Life” as one of 25 most important films on race. It was also nominated three Oscars including Best Picture.

The studio made mosive history when they didn’t cast a White actress in the role of Beavers’ mixed-race daughter. Fredi Washington was criticized by some member of the Black community because they thought she was passing for White in the real world. In fact, Washington, who left films in 1937, became a noted Civil Rights activist. And there were many changes to the original script.

Originally, the Production Code of America complained “the main theme is founded upon the results of sex association between the white and black race (miscegenation), and as such, in our opinion, it not only violates the Production Code but is very dangerous from the standpoint both of industry and public policy. The producer suggested that to avoid the inference that the leading character was a descendent of a white ancestor, they would definitely establish that her white skin was due to a rare but scientific that such a child might of a line of definitely Negro strain”

“Show Boat” (1929, 1936, 1951)
Edna Ferber took on racism in her 1926 novel with her mixed race showboat performer Julie, who is married to her White partner. When it’s discovered that she is mixed and married, they are forced to leave the boat. Tragically, Julie’s fate is sealed. The groundbreaking Oscar Hammerstein II–Jerome Kern 1927 musical didn’t shy away from the miscegenation plot point

However, the 1929 film version, which was part-talkie/part silent, totally ignored Julie’s race. It was included in the 1936 James Whale-directed film version of the musical which starred Helen Morgan, who originated the role on Broadway, playing Julie. Her version of “Bill” will just grab you by the heart. But according to TCM.com Universal had to get special permission from the Hays Office to include the miscegenation sequence because it was “banned as a film subject.”

One of MGM’s biggest stars Ava Gardner took on the role of Julie in George Sidney’s 1951 Technicolor version. The pioneering Black singer/actress Lena Horne, who was also at MGM, talked about how she fought to play the role of Julie. She had done so in a sequence in the 1946 musical “Words and Music.” Originally, MGM had planned to make the film earlier with Judy Garland being announced as early as 1944 she was to play Julie. Horne talked about being devastated at not being cast in a Nov. 1981 People magazine article. A few weeks later, Sidney wrote a letter to the editor of the L.A Times saying that Horne was wrong. He only had tested Dinah Shore and Gardner in the part. The Production Code of America didn’t want MGM to include the miscegenation plot, which still forbade that subject matter on screen. But MGM pointed out that they had allowed Universal to keep it in the 1936 film.

“Pinky” (1949)
Horne also had wanted to play the lead role in this drama about light-skinned Black woman, who had passed for White when she went to nursing school. She returns to her small Southern hometown and her religious, illiterate grandmother who raised her and works as a laundress. The role, though, went to White actress Jeanne Crain, who starred in such film as 1946’s “Margie” and 1949’s “A Letter to Three Wives” and was under contract to 20th Century Fox. She earned an Oscar nomination for Best Actress; Ethel Waters as her grandmother received a supporting nomination, as did Ethel Barrymore. William Lundigan played Pinky’s White fiancée whom she ultimately tells the truth of her heritage.

The Production Code of America had worries that “Pinky” could cause distribution problems in the South and even could lead to the rise of the KKK. In fact, PCA’s Joseph I. Breen urged Fox to “avoid physical contact between Negroes and whites, throughout the picture” in order not to offend audiences. Along the way, the film changed screenwriters and even directors. John Ford worked on “Pinky” for about a week and left due, allegedly, to illness, and Elia Kazan took over. Review were generally strong, though, the New York Times pointed out that “Pinky” became “perilously close to denying the very equality it seems to espouse by accepting paternalism as the easiest and happiest way out.”

“Lost Boundaries” (1949)
This racial drama, which won screenplay honors at Cannes, was released the same year as “Pinky,” but was an independent production. Based on the story of a real doctor who had passed for White in the 1930s in Vermont, this drama stars Mel Ferrer in his film debut as a Black doctor who passes for White in order to get work. Beatrice Pearson plays his wife, who is also of mixed race.  Both actors were White. Atlanta banned the film after the city’s censor declared it would “adversely affect the peace, health, morals and good order of the city.” The Memphis censor stated his reason for banning the film “ In passing white the Negro doctor in the film had slurred his own race by proving himself an imposter and a liar.”