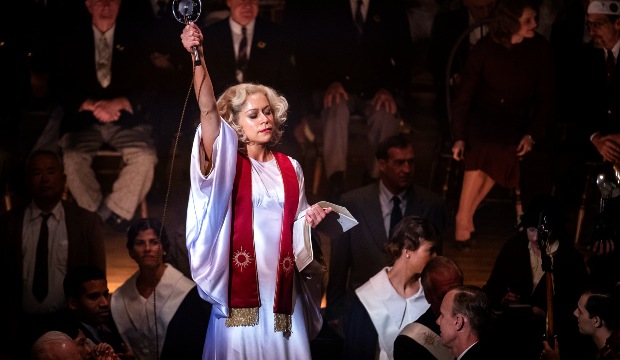 HBO contends at the 2021 Emmy Awards with their reboot of “Perry Mason” that features Emmy Award winner Matthew Rhys from “The Americans” portraying the iconic defense attorney, opposite other Emmy-winning actors starring in single-season roles. The legal drama from the Team Downey production company (co-founded by Robert Downey, Jr.) was a commercial hit upon its debut last summer and its premium cable broadcaster quickly renewed the eight-episode serial beyond its initial “limited series” order.

Rhys received Best Drama Actor nominations at the Critics Choice, Golden Globe and Satellite Awards early this year, with Critics Choice also citing the show itself in their Best Drama Series lineup. The period piece picked up industry-voted nominations from the American Society of Cinematographers, Art Directors Guild and Makeup Artists and Hairstylists Guild, as well as its first win courtesy of the Location Managers Guild International.

Ahead of pre-production on its ordered next season, Gold Derby chatted with nine of the key creatives who made the eight episodes that have aired thus far (watch by clicking the seven links below):

Will “Perry Mason” score Emmy nominations? Make your predictions at Gold Derby now. Download our free and easy app for Apple/iPhone devices or Android (Google Play) to compete against legions of other fans plus our experts and editors for best prediction accuracy scores. See our latest prediction champs. Can you top our esteemed leaderboards next? Always remember to keep your predictions updated because they impact our latest racetrack odds, which terrify Hollywood chiefs and stars. Don’t miss the fun. Speak up and share your huffy opinions in our famous forums where 5,000 showbiz leaders lurk every day to track the latest awards buzz. Everybody wants to know: What do you think? Who do you predict and why?