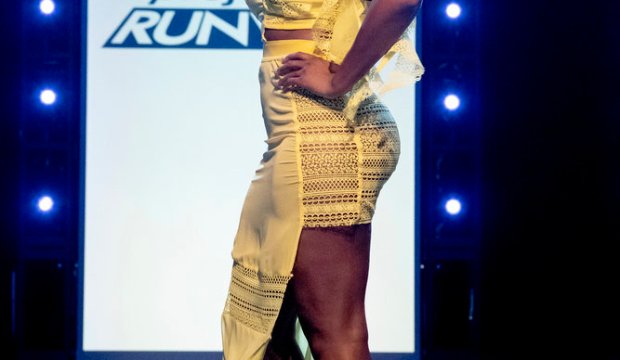 Victoria Cocieru knows who she is as a designer perhaps on “Project Runway” season 18. She has a clear, consistent aesthetic that comes through in her looks … most of the time. When she struggles during a challenge she tends to go down hard. So while she has created some of the show’s most skillful and unique looks, she has also sent some of the worst looks of any designer down that runway. Click above to see how we rank all of her creations from worst to best, updating every week as the season progresses. And spoiler alert — her best look is not necessarily what she won for.

For weeks Cocieru could do no wrong. She was safe in the season premiere episode, “Blast Off,” but then she got five high scores in a row, winning in “The Ultimate Upcycle” for her deconstructed and reconstructed Goodwill suit for Karlie Kloss to wear to a fashion event in Paris. That was her signature asymmetric design crisscrossed with straps and the one the judges seemed to love the most — especially when you consider that Kloss was voting for a look that she’d be wearing herself.

But does Cocieru have more ideas beyond that? When thinking beyond her usual, arguably repetitive aesthetic the pressure got to her multiple times, especially in “Sheer Genius” when she was so frustrated that she almost quit the competition completely. She ultimately cobbled together a dress in two hours that wasn’t just her poorest showing but arguably one of the worst looks anyone sent down that runway in season 18.

One thing’s for sure, though: even at her worst moments, she never plays it safe. The judges tend to admire designers who swing for the fences, even if they strike out a few times. That verve kept her in the competition when other designers paid the price for being too timid. What do you think were her best and worst looks?