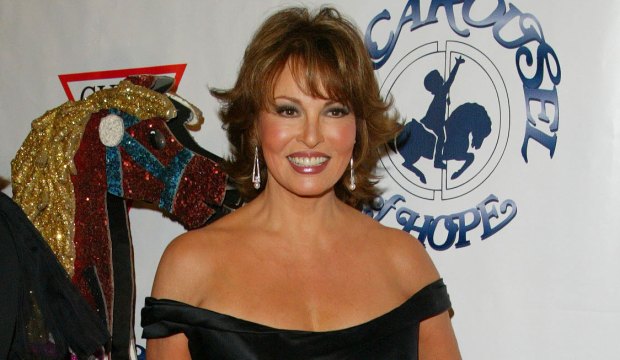 Raquel Welch made a name for herself as an international sex symbol, but also an accomplished thespian as her career progressed. But what are her greatest accomplishments? Scroll down to see Welch’s most notable movies ranked, plucked from a career spanning well over half a century.

After winning beauty pageant titles including Miss San Diego and Maid of California as a teen, she attended San Diego State College on a theater arts scholarship and performed in local theater productions. Then she was a weather forecaster at a local San Diego TV station. And in 1963 she started to pursue roles with movie studios. Welch had a small part in 1964’s “Roustabout” starring Elvis Presley, and she stood out in the beach movie romp “A Swingin’ Summer” in 1965 as a bookworm who eventually tosses her glasses, lets down her hair, heats up the screen and even sings a tune.

Welch’s major break came in 1966’s “One Million Years B.C.,” a remake of a 1940 stone-age fantasy that established her reputation as a pin-up girl, a unique non-blonde bombshell thanks to a best-selling poster of her in a revealing doe-skin bikini. The rest of her resume ranges from 1970’s notoriously trashy “Myra Breckinridge” to 1973’s sublimely comedic “The Three Musketeers,” the source of Welch’s Golden Globe win for Best Film Comedy/Musical Actress, and all the way to her appearance in 2017 as a rich sugar granny targeted by an inept gigolo in “How to Be a Latin Lover.”

So which of those films do we count as her best? Find out below, and let us know which ones you agree (or disagree) with:

The notorious comedy was based on Gore Vidal’s 1968 novel with Welch playing a transgender woman formerly known as Myron (played by real-life critic Rex Reed). She claims to be Myron’s widow and ends up as a teacher at an acting school run by her uncle (John Huston), where she tries to indoctrinate the students by introducing the concepts of “femdom” into the curriculum. Mae West was seduced into returning to the big screen for her first film role since 1943 as Leticia Van Allen, a lecherous old lady. Her other contribution? Getting the then-unknown Tom Selleck to be one of her studs.

Ah, the ‘70s, a time when PC principles did not apply. You can guess what part of the title served as a nickname for Welch’s telephone operator in this dark comedy about a Los Angeles ambulance company. Bill Cosby is the star driver Mother — last name Tucker — who drinks on the job, hassles nuns and is rude to everyone else. Joining this band of misfits is a Vietnam War ambulance driver Harvey Keitel, who earns the name Speed for supposedly selling cocaine to children. Directed by Peter Yates of “Bullitt” fame, it was described by Roger Ebert as “an unhappy cross between “MASH” and “As the World Turns.” But forgettable it was not.

An up-and-coming Welch found herself acting opposite two cinematic legends, Jimmy Stewart and Dean Martin, as outlaw brothers Mace and Dee. After Dee escapes being hanged when Mace poses as the executioner, the pair goes on the run when pursued by George Kennedy as Sheriff July Johnson. The lawman’s lady friend, Maria (Welch), takes a shine to Dee. The brothers try to reform their criminal ways, but they end up surrounded by a bunch of Mexican bandits and must join forces with the sheriff to fend them off.

Mexican comic actor Eugenio Derbez plays Maximo, a gigolo who seduces older rich women and lives off their wealth. When he gets kicked out by his 80-year-old wife (Renee Taylor), he goes on the prowl to find another wealthy older woman to support him. He sets his sights on Welch’s Celeste, the grandmother of his young nephew’s crush who just so happens to be a billionaire widow. But his attempts to charm her fail miserably.

This British comedy directed by Stanley Donen was written by and stars English jokers Peter Cook and Dudley Moore, who combine the mod London of the ‘60s with the legend of Faust. Cook, in the guise of a cheeky Devil, offers Moore’s lovelorn short-order cook Stanley seven wishes in exchange for his soul so Stanley can woo a waitress he pines for. But the fallen Satan ultimately frustrates him by slightly altering the intent of his desires. Welch provides one of the more amusing moments as climbs into Stanley’s bed as Lillian Lust.

Directed by Herbert Ross and written by Anthony Perkins and Stephen Sondheim, the clever script was inspired by real-life scavenger hunts that the two talents put on for their showbiz pals. The murder-mystery premise takes place aboard the yacht of a movie producer (James Coburn), whose wife died one year earlier in a hit-and-run accident. Welch plays an actress wed to her manager (Ian McShane). Others include Dyan Cannon as a talent agent, Richard Benjamin as a screenwriter, Joan Hackett is his wife and James Mason as a director. The producer makes his guests play a parlor game, but it takes a deadly turn. While Welch claimed that her movie star and McShane’s manager-husband were based on Ann-Margret and her spouse Roger Smith, Sondheim later said the characters were actually based on Welch and her own husband and manager Patrick Curtis.

This major production directed by Richard Fleisher is a well-regarded sci-fi blockbuster set during the Cold War that won Oscars for its art direction and visual effects. The sight of the sultry starlet in a skin-tight diving suit was quite the visual effect in and of itself as she played a member of a medical team who shrink themselves to microscopic size and enter the bloodstream of an injured scientist while attempting to repair his brain.

Welch added eye candy to this Mexican-flavored remake of Ang Lee’s 1994 film “Eat Drink Man Woman.” Hector Elizondo is widower Martin, a great chef who has become depressed because he is losing his senses of taste and smell. Welch plays a widow who would love to bring this sad cook some joy. When Martin’s eldest daughter (Elizabeth Pena) finally falls for the high school coach, Welch’s sexy Hortensia has hope that she might be able to join the family herself. The film directed by Maria Ripoll gives Welch a delicious role and one that she feels totally at home in.

“I don’t do much except run around in this outfit,” Welch told an interviewer in 2017 about the kitschy prehistoric cult movie directed by Don Chaffey a year after the film’s 50th anniversary. Good thing she did, otherwise her nearly wordless role as fisher-woman Loana the Fair One wouldn’t have made her into a globe-spanning sex symbol and popular pin-up. The actress does show off some fierce female warrior chops as her character saves a young child and later is snatched by a flying reptile and dropped into the sea.

She was such an icon in this film that her poster played a significant role in the 1994 film “The Shawshank Redemption,” where prisoner Andy Dufresne (Tim Robbins) used the famous image in his cell to hide the escape tunnel he spends over 19 years of his incarceration digging. The warden refers to her image as “Miss Fuzzy Britches.”

SEE25 greatest movies about protest, civil unrest and fighting the power ranked, including ‘Do the Right Thing,’ ‘Selma,’ ‘The Hate U Give’ [PHOTOS]

“The Hottest Thing on Wheels,” proclaimed the poster for this roller-derby sports drama. Welch plays K.C. Carr, who leaves her former team in Kansas City, Missouri, to restart her life with her daughter (a young Jodie Foster) in Oregon, where she joins a team called the Portland Loggers run by Kevin McCarthy as twisted owner Burt Henry. Welch, who hadn’t skated since she was seven, got quite pummeled during a fight scene. She also broke her right wrist during a speed-skating session, which delayed shooting for eight weeks. It’s considered to be one of her best and most grounded performances by critics who took to Welch as a hard-bitten brawler who zoomed around the oval rink.

One of the most filmed tales of all time, the Alexandre Dumas classic gets the big-screen treatment from Richard Lester, the director of The Beatles‘ films “A Hard Day’s Night” and “Help.” He delivers a delightful burlesque treatment of a swashbuckling staple with Welch as Constance Bonacieux, a fiercely loyal dressmaker to Queen Anne of Austria, who is as comely as she is clumsy. The actress is a slapstick delight, but she also exhibits lusty passion with Michael York’s handsome D’Artagnan. Critics were less enamored of the sequel, but they still got a kick from the sword-clanging antics. Besides Welch’s win at the Golden Globes, the first film was also up for Best Motion Picture Comedy or Musical.