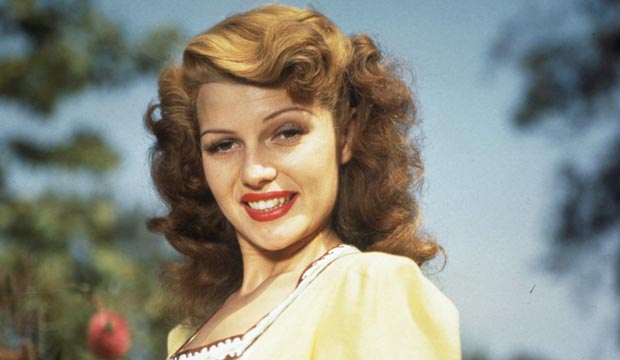 She was the first American actress to marry a prince, the first actress to dance with both Fred Astaire and Gene Kelly, one of the first pin-up girls of the 1940s and the first celebrity to bring awareness to Alzheimer’s Disease. She was the “Love Goddess,” Rita Hayworth.

Hayworth was born on October 17, 1918, in Brooklyn as Margarita Carmen Cansino, into a family of Spanish dancers. Although she later claimed she didn’t care for it, Hayworth started dancing at a young age to please her father. They performed together as the Dancing Cansinos from the time she was 12-years-old. She began landing small film roles in her teens under the name Rita Cansino, eventually earning a contract with Columbia Pictures. There she was “Americanized” by changing her last name to her Irish mother’s maiden name of Hayworth, dying her dark hair red and having electrolysis to raise her hairline. Strong supporting roles in “Only Angels Have Wings” (1939) and “The Strawberry Blonde” boosted her career, and she went on to become one of the biggest box office stars of the 1940s.

Her years of dance training led her to being cast in some memorable musicals, resulting in her distinction of being one of only six actresses to keep up with both legendary dance men Astaire and Kelly. When pressed, Astaire eventually admitted that Hayworth was his favorite dance partner, claiming, “Rita danced with trained perfection and individuality.” Beginning in 1944, Hayworth was one of the top box-office attractions for three years running, with her skills at a variety of dances – ballet, tap, ballroom, Spanish – virtually unmatched in Hollywood at the time.

Although extremely popular in musicals, she is also one of the most memorable femme fatales of the film noir genre, making her mark in the classics “The Lady from Shanghai” (1947) and “Gilda” (1946), which would become her signature role and leave enduring marks on pop culture.

In 1941, Hayworth posed for a “Life” magazine photo in which she is wearing a negligee with a black lace bodice and kneeling on a rumpled bed. This famous photo led to her becoming one of the top two pin-up girls of the World War II years (the other was Betty Grable). Her “bombshell” status was so indelible that following the release of “Gilda” it was rumored that an atomic bomb which was to be tested in the Marshall Islands would bear her image, and the fourth atomic bomb ever detonated was decorated with a photograph of Hayworth along with the nickname “Gilda.” Although meant as a compliment, Hayworth was deeply offended. Decades later, Stephen King would write a novella titled “Rita Hayworth and Shawshank Redemption,” which would be made into the acclaimed 1994 film “The Shawshank Redemption.” It is Hayworth’s iconic “Life” magazine photo on Andy’s prison wall, and it’s her hair flip in “Gilda” that Red “really likes.”

As confident and luminous as she appeared on screen, she was in reality very shy, and sadly her life was full of challenges. Her beauty and talent were exploited throughout her life, first by her father, then by her first husband, then by the head of her studio, Harry Cohn. Hayworth’s relationship with Columbia Pictures was strained for many years, and she remained bitter towards Cohn until the end. “The Love Goddess,” as she was dubbed, spent much of her life looking for love and trying to please men, marrying and divorcing five times. Her most famous marriages were to Orson Welles, with whom she had a daughter and was her great love, and to Prince Aly Khan, with whom she had a second daughter. Many of her relationships included mental abuse, and she famously said that “Every man I have ever known has fallen in love with Gilda and awakened with me.”

Hayworth had problems with alcohol, and was known to fly into rages. She began having difficulty remembering lines in the 1960s, and made her final film in 1972. All of her instabilities were credited with alcoholism; however, in 1980 she was diagnosed with Alzheimer’s. At the time, the disease was not very well-known, and it had taken years to correctly diagnose her. It is believed that she began to exhibit symptoms in her 40s, and was further impaired by the alcohol abuse and the stress caused by her demanding work and the failure of her marriages. Her daughter Yasmin Khan cared for her in her final years, and on May 14, 1987, Hayworth died at the age of 68 from the complications due to Alzheimer’s disease. Hayworth was the first celebrity to publicly share her diagnosis; Khan continues to raise awareness and is president of Alzheimer’s Disease International.

There’s not a long list of awards to cite for this legend; in fact, she only received one major nomination – at the Golden Globes for the lackluster “Circus World” (1964). But success can’t always be measured in awards; Hayworth left a lasting impression with her screen presence, a combination of beauty and sexual allure unmatched. Tour our photo gallery above ranking her 12 greatest film performances.