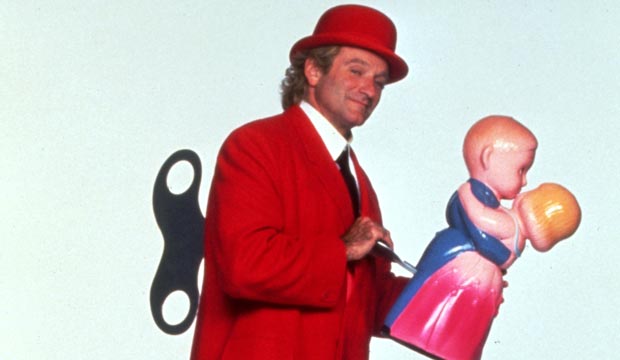 To this day, Robin Williams remains a comedy icon, and even though he is gone, the legacy of his film work lives on. That legacy is a large part of the new documentary “Robin Williams: Come Inside My Mind,” which is currently showing and streaming on HBO. Equally adept at outrageous comedy and sensitive drama, Williams was a one-of-a-kind performer, one whose unique style will likely never be equaled. He tragically died on August 11, 2014.

After success as a stand-up comic and television stardom via “Mork and Mindy,” Williams turned to film and achieved success far beyond what his TV success could have indicated. He won an Academy Award for “Good Will Hunting” (1997), one of four Oscar nominations he earned in his career (also including “Dead Poets Society,” “The Fisher King” and “Good Morning, Vietnam”).  Williams also earned two Screen Actors Guild Awards (for 1996’s “The Birdcage” and “Good Will Hunting”) and received nine Golden Globe nominations, winning statues for 1987’s “Good Morning, Vietnam,” 1991’s “The Fisher King,” 1993’s “Aladdin” and 1994’s “Mrs. Doubtfire.”

Being reminded of Williams’ remarkable film career as depicted in “Come Inside My Mind” prompts another look back. Take a tour of his 20 greatest movie performances, ranked from worst to best, in our photo gallery above.

20. TOYS (1992)
In Williams’ career, Barry Levinson‘s “Toys” is an odd case because the film was not a hit, critically or commercially.  Still, Williams as the son of a toy mogul who has been passed over to inherit the business, brings a sense of wonder and determination to see that this wrong is righted, a quest that immediately brings the audience over to Williams’ side.

19. JUMANJI (1995)
Although the recent Dwayne Johnson vehicle “Jumanji: Welcome to the Jungle” proved to be the bigger hit, the original that Williams established paved the way. In Joe Johnston‘s film, Williams plays Alan, who, as a child was sucked into the board game Jumanji and reappears 26 years later as an adult. Although not a success critically, Williams received good reviews, and anecdotally, the film has become a favorite among family audiences.

18. HOOK (1991)
Steven Spielberg‘s fantasy-adventure film bringing the Peter Pan story into modern day received mixed reviews, but Williams’ performance as a grown-up Peter, now a workaholic lawyer, received favorable notices. His Peter has the story’s biggest arc, moving from a man who has put career ahead of his family, only to learn, after his children have been kidnapped by Captain Hook (Dustin Hoffman), that the best way to be a responsible adult is to never forget your lessons from childhood.

17. HAPPY FEET (2006)
Williams is often at his best in animated features where he can let his vivid imagination run wild. In George Miller‘s Oscar-winning “Happy Feet,” Williams voices a myriad of characters — Cletus, Ramón (an Adelie penguin) and Lovelace (a rockhopper penguin), as well as the film’s narrator. Williams returned for 2014’s “Happy Feet Two,” his final animated film before his death.

16. NIGHT AT THE MUSEUM (2006)
Williams had one of his biggest hits in Shawn Levy‘s comic fantasy film about a museum night watchman (Ben Stiller), who learns that after dark, the exhibits come to life, including a wax figure of President Theodore Roosevelt (Williams). He appears to be having an absolute blast playing the Rough Rider, as Roosevelt aids the watchman in foiling a robbery plot at the museum.

15. POPEYE (1980)
Robert Altman‘s stylized adaptation of the legendary Max Fleischer cartoon was widely derided when it first opened in 1980, but looking at it again with some distance, it’s actually a pretty remarkable achievement, creating a cartoon world in real locations. Williams, in his first big screen lead performance, absolutely has Popeye down (as does Shelley Duvall as Olive Oyl).

14. WHAT DREAMS MAY COME (1998)
In Vincent Ward‘s imaginative film, Williams portrays Chris Nielsen, a pediatrician who is killed in a car crash and who must negotiate the afterlife with the help of his late mentor Albert Lewis (Cuba Gooding Jr.). Chris is awed by the beauty of heaven but is dismayed when he learns that his grieving wife has committed suicide and may be going to hell.

13. ONE HOUR PHOTO (2002)
Of all of Williams’ dramatic roles, his Sy Parrish in Mark Romanek‘s “One Hour Photo” is one of his most chilling. For most people today, the idea of taking your film to a one hour photo mart might seem dated, but Williams’ performance is not. As a photo developer who becomes obsessed with photos depicting the goings-on of a local family, Williams digs deep into the character, revealing a socially-inept man who is trying to reach out to others in absolutely the wrong way.

12. PATCH ADAMS (1998)
Another huge Williams hit, “Patch Adams” is a biographical comedy based on the life of Dr. Hunter “Patch” Adams, who was a patient in a psychiatric hospital but decided to dedicate his life to medicine by showing kindness to his patients, an approach that didn’t sit well with the powers that be. While firmly rooted as a biography, “Patch Adams” provided Williams with the room to utilize his many improv comedy skills.

11. MOSCOW ON THE HUDSON (1984)
One of Williams’ first films that offered him a chance at a character-actor turn, Paul Mazursky‘s movie is the delightful story of Vladimir Ivanoff (Williams), a saxophonist with a Russian circus who decides to defect while on a tour of the United States. As with so many of Williams’ best characters, his Vladimir is conflicted, but aspirational and poignant. For his performance as Vladimir, Williams earned his first Golden Globe nomination.

10. AWAKENINGS (1990)
Williams earned his fourth Golden Globe nomination in this Penny Marshall-directed film from Oliver Sacks‘ memoir. Dr. Malcolm Sayer (Williams) is a dedicated physician working with catatonic patients who discovers that the drug L-Dopa is able to awaken his patients from their comas which, in some cases, have lasted for decades. Williams’ work here is sensitive and detailed and is a far cry from the broader approach to doctors that he needed to take in “Patch Adams.”

9. THE WORLD ACCORDING TO GARP (1982)
One of Williams’ early major splashes into the film world was his performance in George Roy Hill‘s film of the best-selling John Irving novel. As T.S. Garp, the illegitimate son of feminist mother Jenny Fields (Oscar nominee Glenn Close), Williams scores as Garp, who, despite tragedy in his life, draws ever closer to the world of his mother, which includes her friend, transsexual football player Roberta Muldoon (Oscar nominee John Lithgow).

8. INSOMNIA (2002)
Christopher Nolan‘s best little-known film pairs Williams and Al Pacino in a murder mystery set in Alaska. Williams is local crime writer Walter Finch, and when a teenage girl is murdered in his town an LAPD detective (Pacino) is sent to investigate and begins to suspect that Finch may be the man responsible. Williams plays it very straight here in a manner that keeps the audience guessing whether he could be the killer or not.

7. THE BIRDCAGE (1996)
Fosse! Fosse! Fosse! The Mike Nichols and Elaine May adaptation of the French film “La Cage aux Folles” was a critical and box-office hit, with Williams as Armand and Nathan Lane as Albert, a gay director/actor couple in the world of drag.  Williams and Lane had undeniable chemistry, which made the romantic pairing thoroughly believable, with Williams in particular grounding the film as a gay dad who must deal with his son’s potential in-laws. As part of the ensemble cast, Williams won his first Screen Actors Guild Award.

6. THE FISHER KING (1991)
Jeff Bridges stars in Terry Gilliam‘s film about a shock jock who sinks into depression when his incendiary on-air comments prompt a mass murder/suicide. He tries to make amends by befriending Parry (Williams), a homeless man driven by the fact that he witnessed his wife’s murder during the mass murder. For his performance as Parry, Williams won his second Golden Globe Award and earned his third Academy Award nomination.

5. MRS. DOUBTFIRE (1993)
One of Williams’ most iconic performances. He plays Daniel Hillard, a voice actor, whom his wife Miranda (Sally Field) views as unreliable, and she sues for divorce and gets custody of their kids. In order to get to see them, he disguises himself as Mrs. Doubtfire and presents herself as a housekeeper whom Miranda hires. For his performance as Daniel/Mrs. Doubtfire, Williams won his fourth Golden Globe Award.

4. GOOD WILL HUNTING (1997)
Williams won the Academy Award as Best Supporting Actor, as well as his second Screen Actors Guild Award, for his performance as Dr. Sean Maguire, a psychologist who is trying to break through to troubled math genius Will Hunting (Matt Damon). Williams’ strong but caring performance revealed new dimensions of his acting capabilities and also earned him his eighth Golden Globe nomination.

3. ALADDIN (1992)
“Aladdin” is the best example on film of Robin Williams Unchained. Without the constraints of live-action performing, the role of Genie in the animated “Aladdin” gave free-rein to Williams to go wherever his imagination takes him and go there he does. It is arguably one of the greatest voice performances in a feature film ever and earned Williams his third Golden Globe Award.

2. GOOD MORNING, VIETNAM (1987)
Williams had been having a solid film career until the success of “Good Morning, Vietnam” shot him into the stratosphere. Based on the life of disc jockey Adrian Cronauer (who died recently), the film gave Williams the opportunity to marry his stand-up material within a serious narrative structure, creating an effective hybrid of wild comedy amidst the horrors of war.  For his performance as Cronauer, Williams earned his first Oscar nomination and won his first Golden Globe Award.

1. DEAD POETS SOCIETY (1989)
You could make a plausible case for any of the top four films to be #1, but I chose Williams’ work as English teacher John Keating in “Dead Poets Society,” a performance that combines the actor’s fast-on-his-feet imaginative delivery with a solidly grounded emotional performance as a teacher who cares more about his students than school politics. For his performance as Keating, Williams earned his second Oscar nomination and his third Golden Globes nom.