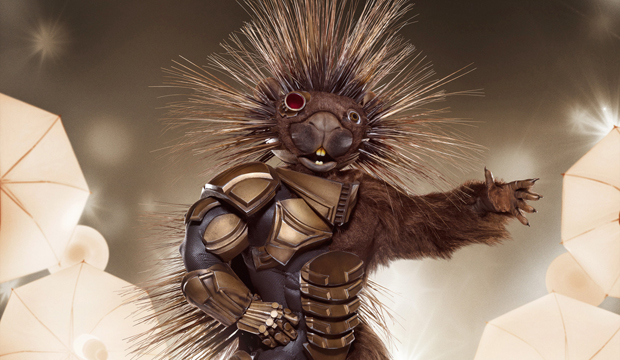 He’s prickly. He’s robotic. He’s got a buttery voice. Robopine, one of the Group A contestants on “The Masked Singer” Season 5, took the stage for the first time on Wednesday, March 10 and instantly skyrocketed to front-runner status. “Whoever you are, I think we are gonna see you all the way to the semi-finals, my friend,” predicted panelist Jenny McCarthy after watching the brown porcupine’s initial performance. Nicole Scherzinger agreed, calling him a “triple threat,” i.e. someone who can sing, dance and act.

Below, see all of Robopine’s “The Masked Singer” performances ranked worst to best. Bookmark this page as we’ll be updating it throughout the season.

Here is how Robopine describes himself in his own words: “I may look prickly, but don’t be scared. Where I came from, I was forced to grow thick quills. I was left to fend for myself with nothing but a dream. So I went on a mission to get on Hollywood’s radar. I used 4-1-1 day and night just to make a connection, until a certain angel said hello. That random call changed everything. Now I’m on my next mission. And when I have my sights set on something, nobody can touch me.”

The panelists — Jenny, Nicole, Robin Thicke and Ken Jeong — all praised Robopine’s voice and his slick dance moves when they first met him. However, they took issue with the fact that he claimed to be 60 years old and accused him of lying, saying he danced like a younger man. “My kids and my grandkids told me I was supposed to hang it up a long time ago,” Robopine asserted. “I’m 60 years old and I really appreciate the love, it means a lot.”