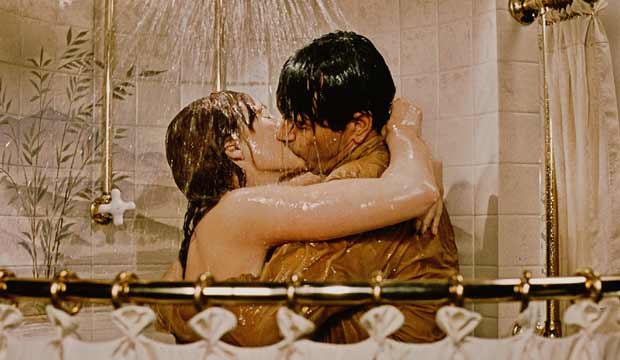 Rock Hudson would’ve celebrated his 93rd birthday on November 17, 2018. The Oscar-nominated actor made a name for himself as a hunky leading man in romantic comedies, melodramas, and adventure flicks. In honor of his birthday, let’s take a look back at 12 of his greatest films, ranked worst to best.

Hudson spent years as a supporting player and leading man in B-pictures before shooting to stardom in Douglas Sirk‘s soap opera satire “Magnificent Obsession” (1954). Shot in glossy Technicolor with a sweeping musical score, the film was the first of many the actor made with the German-born auteur, including “All That Heaven Allows” (1955), “Written on the Wind” (1956), and “The Tarnished Angels” (1957). Trashed by critics and adored by audiences in their time, these works have found a second life as clever subversions of American values, influencing filmmakers such as Pedro Almodovar and Todd Haynes.

He received his sole Oscar nomination for George Stevens‘s gargantuan epic “Giant” (1956). Based on Edna Ferber‘s sprawling novel, the film centers on a decades-long feud between a Texas rancher (Hudson) and an oil baron (James Dean), with the rancher’s glamorous wife (Elizabeth Taylor) in the center. Unfortunately, Hudson and Dean’s onscreen rivalry played out in real life as well, with the two splitting the vote in Best Actor and swinging the prize to Yul Brynner (“The King and I”).

Three years later, Hudson teamed up with squeaky clean leading lady Doris Day and sardonic supporting player Tony Randall for the frothy romantic comedy “Pillow Talk” (1959). It was the first of three candy-colored entertainments the trio made together, including “Lover Come Back” (1961) and “Send Me No Flowers” (1964).

Hudson also dipped his toes into action fare throughout his career, including John Frankenheimer‘s paranoiac sci-fi thriller “Seconds” (1966) and John Sturges‘ Cold War adventure “Ice Station Zebra” (1968). When his cache as a leading man began to wane, he turned to television with prominent roles on the mystery series “McMillan & Wife” and the primetime soap “Dynasty.”

Although Hudson’s homosexuality was an open secret in Hollywood, it became front page news following his death from AIDS in 1985. At just 59 years old, he became the first celebrity to succumb to the disease.

Tour our gallery of Hudson’s 12 greatest films, and see if your favorite ranked #1.

12. DARLING LILI (1970)
This WWI musical epic was a huge flop when it hit theaters, making back just $5 million of it’s $25 million budget. Perhaps viewers were shocked to see Julie Andrews subvert her pristine image playing a German spy posing as a British showgirl. She uses her powers of persuasion to gain information from an American pilot (Hudson), but soon realizes she actually loves the guy.

11. ICE STATION ZEBRA (1968)
Hudson often cited this Cold War thriller from John Sturges as the personal favorite of his long career. He plays the captain of a US nuclear submarine racing against a Soviet counterpart to retrieve a downed satellite buried beneath a polar ice cap. Ernest Borgnine, Patrick McGoohan and Jim Brown round out the crew, who soon discover all is not as it first appears at Ice Station Zebra.

10. SEND ME NO FLOWERS (1964)
“Send Me No Flowers” was the last film Hudson made with squeaky-clean leading lady Doris Day and sardonic sidekick Tony Randall. Directed by Norman Jewison, it centers on a hypochondriac (Hudson) convinced he only has months to live. With the help of his best friend (Randall), he sets out to find a suitable new husband for his wife (Day) after he kicks the bucket. Yet she soon catches wind of his plan and assumes he’s covering for an affair he’s having.

9. BEND OF THE RIVER (1952)
Hudson made an early film appearance in the Anthony Mann/Jimmy Stewart western “Winchester ’73” playing an American Indian (oh, how times have changed). He reunited with the director and star for a slightly bigger role in another exploration of the wild west, this one about a former outlaw (Stewart) working as a trail guide for a group of farmers traveling to Oregon who risks his life to bring confiscated goods back to the homesteaders. Hudson co-stars as a professional gambler the settlers encounter in Portland.

8. THE TARNISHED ANGELS (1957)
This adaptation of William Faulkner’s pessimistic novel casts Hudson as a journalist in 1930s New Orleans who runs across a former WWI flyer (Robert Stack) eking out a living as a barnstorming pilot. The young muckraker becomes fascinated by the fallen war hero, ingratiating himself in the man’s family and falling in love with his parachutist wife (Dorothy Malone).

7. LOVER COME BACK (1961)
Following the success of “Pillow Talk,” Hudson reunited with Doris Day and Tony Randall for another frothy screwball comedy. Directed by Delbert Mann, “Lover Come Back” casts the pair as rival advertising agents fighting to land a lucrative account for a product that doesn’t actually exist. Their Madison Avenue rivalry soon turns to romance.

6. MAGNIFICENT OBSESSION (1954)
After years of slumming in B movies and supporting roles, Hudson shot to stardom with this Douglas Sirk melodrama. “Magnificent Obsession” casts him as an irresponsible playboy who crashes his speedboat and needs emergency service from the town’s only resuscitator, at the very moment the kindly Dr. Philips suffers a heart attack. The beloved physician’s widow (Best Actress nominee Jane Wyman) refuses to forgive him, but when she’s blinded, he decides to do anything possible to help her.

5. SECONDS (1966)
This science fiction thriller from John Frankenheimer bombed when it was released in 1966, disappointing audiences with its paranoiac narrative and bleak ending. John Randolph stars as a middle-aged banker weary of his suburban life. When a mysterious company offers him the chance at a fresh start by faking his death and providing him with a brand new face (Hudson), he jumps at it, only to soon regret the decision.

4. ALL THAT HEAVEN ALLOWS (1955)
Hudson re-teamed with director Douglas Sirk and costar Jane Wyman for another winking condemnation of upper class morals. “All That Heaven Allows” centers on a middle aged widow (Wyman) who falls in love with her much-younger gardener (Hudson), much to the consternation of her children and neighbors. Facing the ire of the country club crowd, she is forced to choose between true love and societal acceptance.

3. PILLOW TALK (1959)
“Pillow Talk” was the first of three movies Hudson made with Doris Day and Tony Randall, and it remains the highlight of their collaborations. Day earned a Best Actress nomination for playing an interior decorator who shares a telephone party line with a womanizing bachelor (Hudson). Though she can’t stand him, he decides to woo her by impersonating a Texas rancher, and deception soon leads to romance.

2. WRITTEN ON THE WIND (1959)
Trashed by critics and adored by audiences in their time, the melodramas of Douglas Sirk have found a resurgence in serious film circles, inspiring such auteurs as Pedro Almodovar and Todd Haynes with their mix of gloss and satire. In “Written on the Wind,” his career-best work, a rich Texas playboy (Robert Stack) marries a beautiful woman (Lauren Bacall) who’s adored by his best friend (Hudson). He gives up drinking for his new wife, only to fall off the wagon when he finds out he’s “impotent,” thus driving her into Rock’s arms. Dorothy Malone won the Best Supporting Actress Oscar for playing Stack’s nymphomaniac sister, who lusts after his pal.

1. GIANT (1956)
Most people remember “Giant” as the final entry in James Dean’s short career (it was released after his death in 1955). Yet George Stevens’ gargantuan adaptation of Edna Ferber’s epic novel is so much more than that. Hudson gives his best performance (and earned his sole Oscar nomination) as a Texas cattle rancher who travels to Maryland to buy a horse and returns with a wife (Elizabeth Taylor). Dean co-stars as a ranch hand who falls in love with Taylor before striking oil, sparking a rivalry between him and his boss that will last decades.