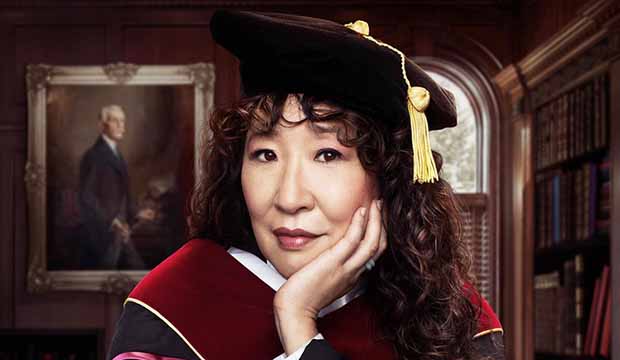 Class is in session as the creator and cast of the Netflix comedy series “The Chair” joins Gold Derby for a special spotlight roundtable discussion on Wednesday at noon PT (3 p.m. ET). The panel will include showrunner Amanda Peet, series star and executive producer Sandra Oh and actors Bob Balaban, Jay Duplass, Nana Mensah and Holland Taylor. Watch their 30-minute chat with contributing editor Tony Ruiz.

RSVP today to this specific event by clicking here to book your reservation. We’ll send you a reminder a few minutes before the start of the show.

“The Chair” follows Professor Ji-Yoon Kim (Oh), an English professor at a prestigious university who is named the chair of her department. Ji-Yoon must navigate her role as the the first woman chair of the department while trying to manage her own personal life as well as the egos and idiosyncrasies of her colleagues.

Oh is a 12-time Emmy nominee who won both Golden Globe and SAG Awards for her roles on “Grey’s Anatomy” and “Killing Eve,” as well as an additional SAG Award as part of the ensemble of “Sideways.”

Duplass, an Emmy-winning producer and star of the Emmy-winning series “Transparent,” plays Bill, a newly-widowed professor facing disciplinary action following an outburst in his class.

Balaban, playing a recalcitrant Melville scholar, is an Emmy and Tony-nominated actor, director and producer who was nominated for an Oscar for producing 2001’s “Gosford Park,” which earned Balaban a SAG Award as a member of the ensemble.

Taylor, an eight time Emmy nominee and a winner for her role on “The Practice,” is Joan, an expert in the works of Chaucer who is set in her ways despite pressure to listen to her students.

Nana Mensah plays Yaz McKay, a young faculty member whose progressive teaching methods put her at odds with some of her colleagues. She is an acclaimed actress, writer and director who has appeared on television in “13 Reasons Why” and “New Amsterdam,” and on film in “The King of Staten Island” and “Queen of Glory,” which she also wrote and directed.

“The Chair” marks Peet’s first time as a creator and showrunner. The actress has appeared on film in films like “Syriana,” “The Way, Way Back” and “Something’s Gotta Give” and on television in shows like “Jack and Jill,” “Togetherness” and “Brockmire.”