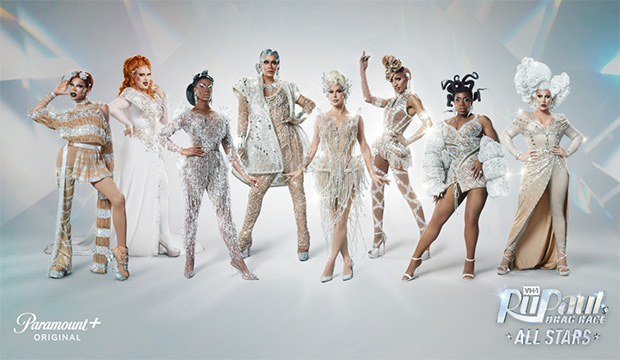 The all-winners season of “RuPaul’s Drag Race All Stars” kicked off May 20 on Paramount+ with the twist of all twists: instead of host RuPaul Charles eliminating queens each week, she would instead reward the challenge champs with Legendary Legend Stars. At the end of the season, the four contestants with the most stars (announced below) will compete in the Lip Sync LaLaPaRUza Smackdown For The Crown. That means the weekly star recipients are officially the ones to beat. So who’s out front to win so far? Read on for your “RuPaul’s Drag Race All Stars” Legendary Legend Stars update (after Episode 11).

The eight former winners who returned to the competition this year were Raja (Season 3), Jinkx Monsoon (Season 5), Yvie Oddly (Season 11), Jaida Essence Hall (Season 12), Monét X Change (All Stars 4), Trinity the Tuck (All Stars 4), Shea Couleé (All Stars 5) and The Vivienne (UK 1). The ultimate victor will be named Queen of All Queens and take home a cool $200,000 cash prize.

SEE‘RuPaul’s Drag Race’ winners list: Every season, plus ‘All Stars’

Shea won the “Legends” challenge in the season premiere that required the queens to write and perform original verses to Mama Ru’s “Legendary” track. In addition to claiming a $10,000 cash tip, she earned the power to block one queen from receiving a star the following week. She used the bedazzled plunger to block Trinity and, wouldn’t you know it, that savvy play came in handy because Trinity was one of the top two in the following week’s “Snatch Game” challenge.

In the second episode, Jinkx won the “Snatch Game” thanks to her impersonations of Natasha Lyonne and Judy Garland. She chose to block Shea, to which Trinity shouted, “Revenge!” Jinkx’s thinking is that the plunger should be used to block people who already have Legendary Legend Stars, to temporary halt them from winning more.

The third episode was “The Realness of Fortune Ball” with Jaida and Trinity both earning stars. Jaida decided to use the platinum plunger to block Jinkx from winning the following week. Noticing a pattern here? So far, each person that has blocked someone has been blocked themselves the following week.

In the fourth episode, the “Fairytale Justice” improv challenge, The Vivienne and Jinkx were named the champions thanks to their impressions of Goldilocks and one of the Three Little Pigs, respectively. Jinkx didn’t receive a star because she’d been blocked by Jaida, so only Viv earned a star this week. The Vivienne blocked Monet with the platinum plunger.

The fifth week brought a twist to the Legendary Legend Star game, as Mama Ru announced the top two queens of the week would each get to keep a star and gift a star to someone else. Jinkx won the “Draguation Speeches” challenge (and blocked The Vivienne) while Raja was the runner-up. We’ll find out who Jinkx and Raja gift their extra stars to at the top of the sixth episode.

Episode 6 began with Raja gifting her extra star to Yvie, and Jinkx gifting her extra star to Jaida. After the girls competed in the “Total RU-Quest Live” performance challenge, Mama Ru declared the top two winners to be The Vivienne and Yvie. Since Viv was blocked, she did not receive a star. The Vivienne then won the lip sync and blocked Jinkx with the platinum plunger.

During the seventh week, the “Legendary Legend Looks” challenge tasked the queens with gaining inspiration from RuPaul’s former iconic outfits. Jaida and Trinity were named the Top 2, with Trinity winning the lip sync and earning the power to block. Trinity chose to give the platinum plunger to Yvie, who was on an incline after earning two stars the previous week.

The “Santa’s School For Girls” acting challenge in the eighth episode resulted in Raja and The Vivienne both earning Legendary Legend Stars for their over-the-top performances. Raja won the lip sync and chose to block Jaida (the only person with three stars) with the plunger.

In Episode 9’s “Dance Like Drag Queen,” Monet and Jinkx earned stars for their money-themed and peanut butter-themed viral videos, respectively. Monet then won the spoken word lip sync and gave Raja the platinum plunger, as she was the only person who hadn’t yet been blocked.

The 10th challenge was a roast centered around the theme of “The Kennedy Davenport Center Honors.” For the second week in a row, Jinkx won a Legendary Legend star thanks to her comedic skills (her fourth overall), while Trinity claimed another as well (her third overall). Jinkx won the lip sync, but Mama Ru announced there would be no more platinum plungers from this point forward. With four total stars, Jinkx officially secured her spot in the finale.

In the penultimate episode, RuPaul announced that the two winners would each score three stars — a twist that shook up the entire competition. The challenge was “Drag Race Gives Back Variety Extravaganza” and the winners were Shea (who performed song-and-dance) and Monet (who sang opera). That meant both queens advanced to the finale alongside Jinkx. Since Monet had the most overall stars at five, she got to pick the fourth finalist between three-star holders Trinity and Jaida, and she chose her alliance member Trinity. The week’s lip sync winner was Shea, who earned a $30,000 bonus for her charity, the Period Poverty Project, courtesy of The Palette Fund.

RuPaul then announced that the bottom four queens — Jaida, Raja, Viv, Yvie — would compete in a separate lip sync smackdown competition for who would win the title of “She Done Already Done Had Herses” and a cash prize of $50,000.