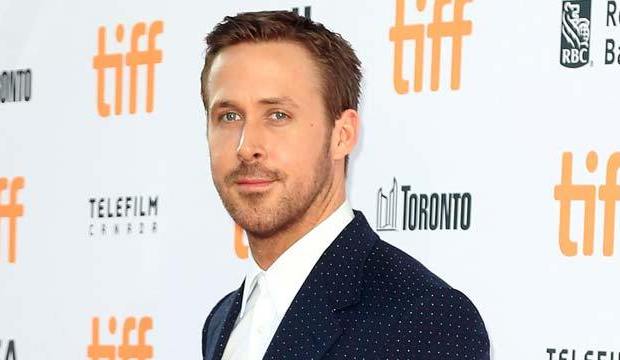 Full disclosure. Many years ago, I worked at the Disney Channel at the time producers were casting a revival of the kids show “The Mickey Mouse Club.” I don’t know who did the selection of the cast members, but among the then-unknown pre-teens they chose were Britney Spears, Justin Timberlake, Christina Aguilera, Keri Russell and a gawky 13 year-old Canadian kid named Ryan Gosling. What a cast! All have gone on to great success as adults, but Gosling especially chose his own path to become one of the most respected film actors working today.

In the course of such films as “Half Nelson,” “Blue Valentine, ” and “The Big Short,” Gosling has been nominated for two Academy Awards and four Screen Actors Guild Awards. He has also been nominated for five Golden Globe Awards, which includes a win for his performance in the Damien Chazelle musical “La La Land.”

Two years later, Gosling has reunited with Chazelle and much of the “La La Land” team for the drama “First Man,” which covers NASA’s eight-year-long effort to put a man on the moon.  That first man would be Neil Armstrong (Gosling), who, despite his exciting profession, was a reserved family man who worries just how his mission will impact the lives of his wife (Claire Foy) and his kids. It sounds like Gosling has chosen his own path once again.

Tour our photo gallery above to look back at that path and rank Gosling’s 12 greatest films from worst to best.

12. THE NOTEBOOK (2004)
The Nicholas Sparks novel was turned into the cult hit of 2004, overcoming mixed critical reviews with enormously positive word of mouth by romance film fans. Most significantly for Gosling’s career, it established him as a serious romantic lead with his portrayal of Noah Calhoun, a South Carolina quarry worker who falls for heiress Allie Hamilton (Rachel McAdams) in the 1940s.

11. THE BELIEVER (2001)
Gosling really established his dramatic acting chops in this role as Daniel Balint, a former Jewish student in a yeshiva who becomes a virulent neo-Nazi in New York. Once primarily known as a song-and-dance kid, Gosling dug deep to bring to life this young man whose twisted views have turned him into a terrorist. Gosling received enormous critical respect for his courageous performance, which led to a career of memorable dramatic performances.

10. THE NICE GUYS (2016)
Call me nuts, but I just love Shane Black‘s “The Nice Guys,” particularly Gosling’s go-for-broke performance in this neo-noir action comedy. As private eye Holland March, who’s drinking and down on his luck in 1977 Los Angeles, Gosling sports a quizzical look, a forearm cast and a droopy mustache as he accepts a job from an elderly woman (Lois Smith) who claims to have seen her dead niece (Margaret Qualley) very much alive. But the niece doesn’t want to be found and hires enforcer Jackson Heally (Russell Crowe) to stop March, a move that turns “The Nice Guys” into a wonderfully whacked-out buddy comedy.

9. BLADE RUNNER 2049 (2017)
Set 30 years after Ridley Scott‘s original film, “Blade Runner 2049” brings that cult classic to a new generation as Gosling portrays K, a blade runner (an LAPD officer who hunts down and kills rogue replicants) while being a replicant himself. The previous film, set in 2019, starred Harrison Ford as blade runner Rick Deckard, and through the plot of director Denis Villeneuve‘s film, K and Deckard come face to face and work together.

8. DRIVE (2011)
Danish filmmaker Nicolas Winding Refn cast Gosling as the lead in his very stylized adaptation of the 2005 novel. As a Hollywood stunt driver, Gosling’s unnamed character also moonlights as a getaway driver for a mob boss (Albert Brooks, who is terrific). He becomes involved with a neighbor (Carey Mulligan) whose ex-con husband (Oscar Isaac) decides to hatch a plot for a million-dollar heist that goes south.

7. THE IDES OF MARCH (2011)
Based on the play “Farragut North” by Beau Willimon, “The Ides of March” stars Gosling as Stephen Meyers, the junior campaign manager for Democratic Gov. Mike Morris (director and co-writer George Clooney), who is vying for the Democratic nomination for President. But the knowledge that Meyers has about the Morris campaign is of great interest to the governor’s opponents, who attempt to woo the young operative over to their side.

6. CRAZY, STUPID, LOVE. (2011)
In this romantic comedy written by Dan Fogelman (“This Is Us”), Gosling co-stars as womanizer Jacob Palmer who is surprised when his advances are rejected by Hannah Weaver (Emma Stone, in her first pairing with Gosling), a rejection that eats away at Jacob’s enormous ego. In an ensemble cast filled with great comic actors, Gosling’s performance arguably stole the show.

5. THE BIG SHORT (2015)
Here Gosling plays yet another vain and egotistical character (which he does so well) — this time, he’s Jared Vennett, a young bank salesman who discovers a theory that the American housing market is in a bubble, one that could burst at any moment. So he devises a plan to sell credit default swaps, allowing him to pocket considerable commissions from their sale.

4. BLUE VALENTINE (2010)
Derek Cianfrance‘s romantic drama centers around scenes from the marriage of a young couple — house painter Dean (Gosling) and nurse Cindy (Michelle Williams). The story is told in a non-linear fashion, with scenes of the couple first meeting intercut with those of their marriage dissolving, so the actors must note where they are in the story and adjust their characterizations accordingly.

3. LARS AND THE REAL GIRL (2007)
One characteristic of Gosling’s career is a lack of fear in taking on challenging roles, and among his boldest choices was as Lars, a dweeby young man in a Wisconsin town in Craig Gillespie‘s comedy/drama. One day, a package arrives containing Lars’ new girlfriend, an anatomically correct sex doll whom he names Bianca. He introduces Bianca to his indulgent family and friends, who treat the doll as a real girl. But then a genuine real girl comes into Lars’ life.

2. HALF NELSON (2006)
Gosling was nominated for his first Academy Award for his performance as Dan Dunne, a young inner-city middle school teacher whose style of instruction has earned him accolades. But outside the classroom, Dan’s life is a mess, as he becomes addicted to cocaine. He soon becomes more reckless in his drug use and is caught by Drey, one of his students (Shareeka Epps), as Dan is getting high in the school locker room.

1. LA LA LAND (2016)
Writer/director Chazelle’s much-heralded musical reunited Gosling with his “Crazy, Stupid, Love.” co-star Stone. Gosling plays aspiring jazz pianist Sebastian Wilder who meets (and eventually falls for) Mia Dolan (Stone) whose dream is to become an actress.  Their romance grows against the vistas of Los Angeles and the music that their residents play and sing.