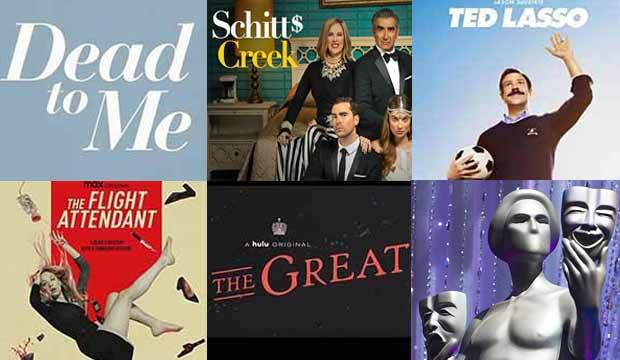 Since their first ceremony in 1995, the Screen Actors Guild Awards has honored the collective work of TV series’ casts in addition to individual actors. The 2021 nominees for the Best Comedy Ensemble award are “Dead to Me,” “The Flight Attendant,” “The Great,” “Schitt’s Creek,” and “Ted Lasso.” The winner will be revealed during the 27th SAG awards ceremony, airing April 4 on TBS and TNT.

This year’s lineup includes no past winners and only one previously nominated cast (“Schitt’s Creek,” 2020). Besides the inaugural nominees of 1995, this distinction has only applied to one other group of competitors. Three years ago, the cast of “The Marvelous Mrs. Maisel” bested their fellow first-timers from “Atlanta,” “Barry,” and “The Kominsky Method,” as well as the two-time nominees from “GLOW.”

Included among this year’s 57 qualifying actors are five who previously competed as members of different TV ensembles. James Marsden (“Dead to Me”) vied for this award in 2014 for “30 Rock” and for the corresponding drama award in 2017 for “Westworld.” Jeremy Swift (“Ted Lasso”) also sought 2017’s Best Drama Ensemble award as a “Downton Abbey” cast member. Kaley Cuoco (“The Flight Attendant”) competed here six times as part of the ensemble of “The Big Bang Theory.” One of her current castmates, Michiel Huisman, was nominated for the drama series “Game of Thrones” twice, while another, T. R. Knight, earned three bids for “Grey’s Anatomy” and won in 2007.