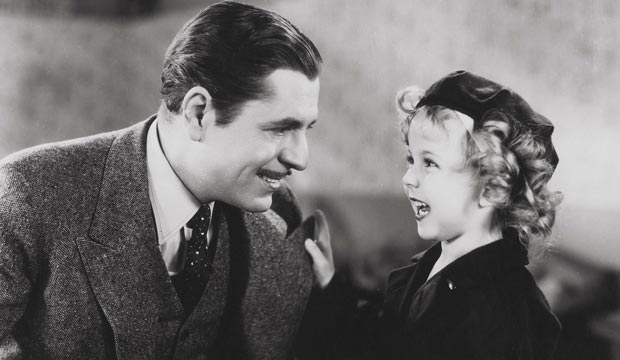 As President Franklin D. Roosevelt once said, “It is a splendid thing that for just fifteen cents, an American can go to a movie and look at the smiling face of a baby and forget his troubles.”

Few Hollywood stars were ever as big –or little — as Shirley Temple. This dimpled darling with her bouncy corkscrew curls and delightful tap-dance routines brought cheer and spread sunshine to moviegoers during the darkest days of the Great Depression. She was the No. 1 box-office draw from 1935 to 1938 and was the first child star to be presented with a special Juvenile Academy Award for her big-screen contributions during 1934. She even had her own line of licensed merchandise including look-alike dolls, dishes and clothing. Before 1935 ended, her income from licensed goods would be more than $100,000 – doubling what she made from her movies.

A born charmer, Temple’s pint-sized characters regularly melted the hearts of the most callous of curmudgeons and the loneliest of bachelor millionaires as well as serving as a precocious Cupid for romantic couples. Encouraged by her mother to sing, act and dance at an early age, Temple made her movie debut at the age of three in 1932 after being cast in a series of “Baby Burlesks” shorts before her big break in the feature-length “Stand Up and Cheer!” As she grew up, Temple acquired more nuance in her acting. But as adolescence beckoned, her popularity declined. She did 14 films from the age of 14 to 21. The best of her later output were “Kiss and Tell,” “The Bachelor and the Bobby-Soxer” and “Fort Apache.” She retired from films in 1950 at the age of 22. As an adult, she chose a career in diplomacy as the U.S. ambassador to Ghana and to Czechoslovakia and served as the U.S. Chief of Protocol.

SEEKennedy Center Honors: 50 Entertainers Who Deserve To Be Selected

Baby-boomer kids would not only enjoy a grown-up Temple as the host of an NBC anthology series of fairy-tale adaptations called “Shirley Temple’s Storybook” that ran from 1958 to 1961. They also were able to watch her films on television as they often were shown on weekend afternoons. The first film to ever make me cry was “Heidi,” with Jean Hersholt as a crusty grandfather who adored his Swiss miss of an orphaned grandchild. When I got to do a 90-minute phone interview with her for USA TODAY when she was a recipient of a Kennedy Center Honor, she told me her favorite film of hers was also “Heidi” with “Wee Willie Winkie” second. Let’s salute Temple, who died in 2014 at the age of 85, in honor of her birthday on April 23 by ranking 13 movies from her youth, from worst to best, including “The Little Colonel,” “Captain January” and “The Little Princess.”