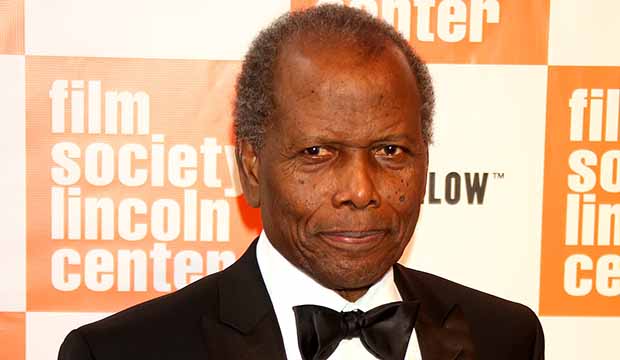 Over the holidays, TCM showed one of my favorite movies of all time, 1967’s “To Sir With Love. “ It stars Sidney Poitier as Mark Thackeray from British Guyana who takes a job as a teacher in the East End of London filled rowdy Cockney students who have little interest in their curriculum. Sir, as his class calls him, realizes that what these teens need is a course in how to make a life for themselves in the world outside a classroom.

Eventually, his pupils realize that he has their best interests at heart and they celebrate at a dance before his flock flies off into real world . Seeing a sexy and sweaty Poitier cut a rug by doing the Pony and the Jerk with Judy Geeson’s flirtatious student was just like receiving an extra surprise gift under my tree.

Little did I know that this silver screen legend, who famously became the first Black male and first Bahamian citizen to win a Best Actor Oscar for his role in 1963’s “Lilies of the Field,” would end up dying a few days later at the age 94 in his native Bahamas on January 6.

Poitier, who possessed matinee- idol good looks and charm, came along as a trailblazer just when the civil rights movement was born in the United States. Eventually he possessed the clout to help other Black artists. Yes, he was often an unswerving hero who tries to blend in with the white folk, especially in 1967’s “Guess Who’s Coming to Dinner,” one of the few films at the time to focus on an interracial marriage. It likely didn’t hurt that Poitier’s future in-laws were played by the likes of Katharine Hepburn and Spencer Tracy.

But Poitier got to blow off some steam, and then some, in 1967’s “In the Heat of the Night,” as out-of-town cop Virgil Tibbs who pairs with Rod Steiger’s good- ol’- boy sheriff Gillespie to solve a murder in his small town. The partnership doesn’t start off well when Gillespie makes fun of his first name, saying “Virgil? That’s a funny name for a nigger boy to come from Philadelphia. What do they call you up there?” That is when Poitier delivers one of the most quoted movie lines ever: “They call me MISTER TIBBS!” And, yes, that would be the title to the sequel.

Early on in the case, a racist plantation owner named Endicott slaps Tibbs’s face when he suggests he might be the murderer. Of course, Tibbs then slaps him right back. Gillespie then decides to rescue Tibbs from a gang of thugs and suggests he should leave town to save himself. But the Philly cop is convinced he can solve the case – and, obviously, he does.

Poitier’s first big hit was 1955’s “The Blackboard Jungle,” which introduced the “Rock Around the Clock” by Bill Haley and His Comets. His character Miller initially engages in anti-social behavior while attending an inner-city school. But Glenn Ford’s teacher convinces Miller to try to lead his class members in the right direction.

In 1958, he starred opposite Tony Curtis as chained-together convicts in 1958’s “The Defiant Ones.” Both he and Curtis were nominated for a Best Actor Oscar as a pair of escaped prisoners who are shackled together in the South while trying to overcome their mutual hatred of each other while trying to get released from their chains. That was followed by a cinematic adaptation of Lorraine Hansberry’s Broadway play “A Raisin in the Sun, “ in which Poitier’s Walter is the head of a family that lives in a run-down small apartment in Chicago’s South Side. Walter’s dad has recently died while his mother is waiting for a much-needed life insurance check for $10,000.

Other notable movies include the 1959 musical film with Poitier and Dorothy Dandridge in the title roles of “Porgy and Bess,” albeit with others providing their singing.

But it was “Lilies of the Field” that allowed Poitier’s itinerant handy man Homer Smith to stumble upon a line-up of East German’ nuns who are in the midst building a chapel for impoverished Mexican Americans. He constantly butts heads with Lilia Skala’s highly determined Mother Maria, who believes Schmidt — as the nuns call him — was sent to them by God. In the meantime, the community gets involved in donating building material while Smith suddenly turns into a budding foreman and contractor.

Poitier felt a heavy responsibility for being one of the few Black stars with commanding lead roles at the time, while being typecast during such a turbulent time when it came to race relations. As he said in 1967, “If the fabric of the society were different, I would scream to high heaven to play villains and to deal with different images of Negro life that would be more dimensional. But I’ll be damned if I do at this stage of the game.”

Back then, the actor was one of the highest-paid leading men in Hollywood and a top box-office draw, ranked fifth among Box Office magazine’s poll of theater owners and critics. Those ahead of him were Richard Burton, Paul Newman, Lee Marvin and John Wayne.

There was an upturn of Black filmmakers like Gordon Parks and Melvin Van Peebles in the late ‘60s and early ‘70s, and Poitier, then in his 40s, decided to join the club when he came up with the 1968 romantic comedy “For the Love of Ivy,” in which he co-starred with Abbey Lincoln. He went on to direct the Western “Buck and the Preacher” in 1972 and acted opposite Harry Belafonte, and a series of comedies, including 1974’s “Uptown Saturday Night,” 1975’s “Let’s Do It Again,” in which he and Bill Cosby teamed up to play a pair of schemers, and 1980’s “Stir Crazy” with Richard Pryor and Gene Wilder. All three comedies didn’t exactly please critics but the trio would go on to be legit box-office hits.

Besides his Best Actor Oscar trophy, in 2001, he received an honorary reward from the Academy “in recognition of his remarkable accomplishments as an artist and as a human.” It was presented to him by Denzel Washington, who would become the second Black lead actor to ever win an Oscar on that same night for his work as a corrupt cop in “Training Day.” And, at the same ceremony, Halle Berry would become the first Black lead actress to win an Oscar for her role in “Monster’s Ball.”

Other awards through the years include a Best Foreign Actor BAFTA for “The Defiant Ones,” a Golden Globe for his role in “Lilies of the Field” as well as being honorary recipient of the Cecil B. DeMille Award and the first African-American to claim the prize. In 2001, he also would win a Best Spoken Word Album Grammy for his recording of his autobiographical work, “The Measure of a Man.”

Other honors to mention in our appreciation include a 1992 AFI Life Achievement Award, a 1995 Kennedy Center Honor, a 2009 Presidential Medal of Freedom presented by Barack Obama and in 1974, Poitier was made an Honorary Knight Commander of the Order of the British Empire by Queen Elizabeth II.

Being Hollywood’s reining Black male on the big screen put a cumbersome burden on Poitier. As he once said, he felt “as if I were representing 15, 18 million people with every move I made.” Someone had to be first. Yes, his roles were somewhat white-washed, including 1965’s “A Patch of Blue,” in which he makes friends with an illiterate, blind, white girl (Elizabeth Hartman), who he takes a liking to. Alas, scenes of Hartman and Poitier kissing were deleted for showings in theaters in Southern states. Thank goodness that he used his stardom for good and maintained his dignity and influence while crusading for civil rights and opening doors for more opportunities for African-Americans in films.