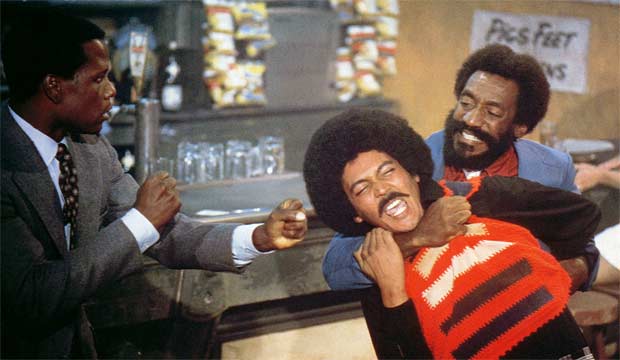 Sidney Poitier celebrates his 92nd birthday on February 20, 2019. The Oscar-winning star broke down barriers for actors of color, becoming a Hollywood leading man at a time before black Americans were even granted full civil rights. He also opened doors for black directors after stepping behind the camera for nine features. In honor of his birthday, let’s take a look back at 20 of his greatest films, ranked worst to best.

Born in 1927, Poitier made his big screen debut in “No Way Out” (1950), playing a doctor treating a racist white bigot (Richard Widmark). Just eight years later he was competing at the Oscars as Best Actor for “The Defiant Ones” (1958), which centers on two runaway fugitives chained together — one black, the other white (Tony Curtis). His bid made him the first black male performer to contend in an acting category at the Academy.

He would soon be joining the winner’s circle with “Lilies of the Field” (1963), a small-scale drama about a wandering handyman who helps a group of nuns build a church. Poitier made history as the first black thespian to win Best Actor, a feat that wouldn’t be repeated until 38 years later when Denzel Washington clinched the prize for “Training Day” (2001). It was sweetly serendipitous that he pulled off this victory the same year that Poitier was given an Honorary Oscar. During his acceptance speech, Washington gave his mentor a shoutout, saying “I’ll always be chasing you, Sidney. I’ll always be following in your footsteps.”

Poitier won the Golden Globe for “Lilies,” competing again for “The Defiant Ones,” “Porgy and Bess” (1959), “A Raisin in the Sun” (1961), “A Patch of Blue” (1965), and “In the Heat of the Night” (1967), as well as the TV movie “Separate But Equal” (1991), in which he played Supreme Court Justice Thurgood Marshall. That role brought him an Emmy nomination, as did his performance as Nelson Mandela in “Mandela and de Klerk” (1997). His performance in the original Broadway production of “Raisin” brought him a Tony bid in 1959. He also won the BAFTA for “The Defiant Ones.”

Additionally, he received the Cecil B. DeMille award at the Golden Globes in 1982, the AFI Lifetime Achievement prize in 1992, the Kennedy Center Honors in 1995, the SAG Life Achievement Award in 1999, and the Presidential Medal of Freedom in 2009, presented by President Barrack Obama, a trailblazer in his own right.

Tour our photo gallery above of Poitier’s 20 greatest films, including a few for which he should’ve earned Oscar nominations.