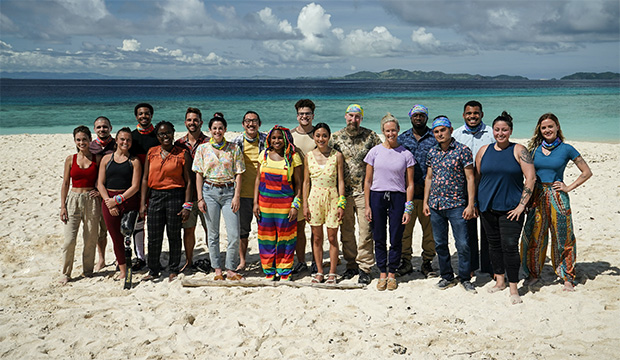 The 44th season of “Survivor,” which is simply titled “Survivor 44,” was officially given the green light by CBS in March 2022 and began filming in Fiji immediately after the 43rd cycle wrapped production last summer. Just like Seasons 41-43, the show is adhering to strict Covid-19 safety guidelines for all cast and crew members, including host Jeff Probst. Read on for everything to know about the upcoming season of “Survivor 44,” including cast and air date information. Bookmark this page as we’ll be updating when new details are revealed.

“Survivor 44” cast
CBS will officially announce the identities of the 18 cast members soon. All we know at this time is that they are brand new (meaning no returning favorites or all-stars) and come from diverse backgrounds and walks of life, in adherence to the network’s 50% diversity mandate. This was put into effect in 2020 and ensures that half of its reality TV casts must be Black, Indigenous or People of Color (BIPOC). The players will start out the game in three different tribes of six people each.

“Survivor 44” air date
Mark your calendars for Wednesday, March 1, 2023, as that’s when the new installment will premiere on CBS with a two-hour episode. “Hey, ‘Survivor’ fans! I just want to let you know some exciting news,” Jeff Probst announced on November 14. “We have a premiere date for ‘Survivor 44’ — March 1st. Two-hour premiere. More details to come when we get closer, but ‘Survivor’ continues on.”

“Survivor 44” filming
“Survivor” typically films two seasons back-to-back in spring/summer, then airs them in the fall of that year and the following spring. In 2020, nothing was produced because of the pandemic, but the show finally set up shop in Fiji in spring of 2021 and filmed Seasons 41 and 42 consecutively. Similarly, Seasons 43 and 44 took place back-to-back in spring/summer of 2022, which means the contestants who partook in the 44th cycle had not yet watched the 43rd installment play out on TV.

“Survivor 44” video trailer
It’s a “Survivor” tradition that the next season of the show is always teased in the final episode of the previous season. That said, the “Survivor 43” finale/reunion aired on CBS on Wednesday, December 14, so that was when viewers got their first peek of the “Survivor 44” video trailer. The clip is filled with drama galore, as a man slips while climbing a rock in the ocean, and Jeff stops a challenge due to a medical emergency. Watch it right here:

“Survivor 44” theme/title
If you’ve seen any of the “new era” versions of the show that began with “Survivor 41,” you already know there are no longer any specific themes to the seasons. Gone are titles like “Survivor: Heoes vs. Villains” or “Survivor: Fans vs. Favorites,” replaced instead by the number of the season. It’s likely this trend will continue for “Survivor 45,” “Season 46,” etc. unless the producers decide to switch things up for a future All-Stars edition.

“Survivor 44” number of days
The game will take place over 26 days, just as it did in Seasons 41-43. As longtime viewers are well aware, seasons used to span a total of 39 days, but the new faster pace appears to be here to stay. (The longest season ever was “Survivor: The Australian Outback,” which lasted 42 days.) Luckily, the show still produces the same amount of episodes (13) even though the time frame is much shorter for the castaways.

“Survivor 44” host
Yep, “Survivor’s” dimpled torch-snuffer Jeff Probst has returned as the host/showrunner of Season 44. Why wouldn’t he? The 61-year-old has appeared in all 43 seasons so far, winning four Emmy Awards as host (2008-2011). Probst’s hosting style has remained consistent for much of the show’s run, where he asks questions of the contestants but never forces them to answer anything they don’t want to.

“Survivor 44” location
Mamanuca Islands, Fiji will once again be the location of “Survivor” for the 12th consecutive time (and presumably all future cycles). The show globe-trotted and explored for its first 16 years on the air, before officially moving to this locale in the South Pacific Ocean in Season 33 (“Millennials vs. Gen X”). “I hope we stay here forever,” Probst declared in 2017 while praising Fiji’s clear water, beautiful beaches and friendly government.