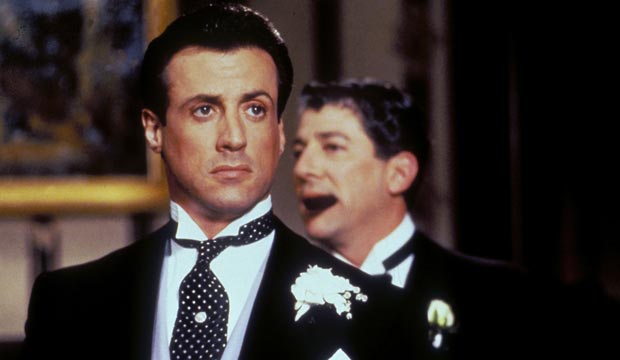 Rocky Balboa is back! Sylvester Stallone has returned to his iconic role as the Philadelphia brawler in Steven Caple Jr.‘s “Creed II,” the follow-up to Ryan Coogler‘s original “Creed.” Stallone’s “Rocky” franchise has six films under its umbrella, plus he has created four films under the “First Blood”/”Rambo” label.  (The series’ fifth “Rambo” film, “Rambo V: Last Blood,” is set to be released in 2019.)

During his career as Rocky, Stallone has earned three Academy Award nominations — two for the original “Rocky” — and a third for his reprisal in the original “Creed.” He received the same three noms for the Golden Globe Award, and this last time, Stallone won the Globe for his Rocky reprisal in “Creed.”

As we anticipate Rocky hitting the ring once again in “Creed II,” let’s take a photo gallery tour of his 12 greatest films, ranked from worst to best.

12. OSCAR (1991)
“Oscar” was based on a French play that was turned into a 1967 French movie, which hardly seems to scream “Sylvester Stallone” remake potential. But “Animal House” director John Landis followed through and made this screwball comedy in which Stallone plays flashy gangster “Snaps” Provolone who promises his dying father (Kirk Douglas) that he will go straight, but his efforts to be a legit banker are complicated by his daughter Lisa (Marisa Tomei) who’s pregnant and has no idea who the father is.

11. CLIFFHANGER (1993)
In this Alpine suspense thriller which he also co-wrote, Stallone portrays Gabe Walker, an ex-mountain climber who is still haunted by the fact that he failed to save his girlfriend (Janine Turner) from falling off a cliff. He gets another shot at redemption when he gets a call to rescue survivors of a plane crash on a nearby mountain, but unfortunately they are led by evil intelligence officer Eric Qualen (John Lithgow) who forces Gabe to lead him to a quest to find the $100 million that was stashed on the plane.

10. NIGHTHAWKS (1981)
In Stallone’s 1981 thriller directed by Bruce Malmuth, his character, NYPD Det. Deke DeSilva, first appears in drag, a first for Stallone, but don’t get your hopes up.  Besides the fact that he’s not pretty, Deke is undercover to try to successfully ensnare a gang of subway assailants.  But then it’s on to seeking out to seeking out terrorist Wulfgar Reinhardt (Rutger Hauer) who hopes to wreak havoc on New York, a role that Stallone handles with his usual aplomb.

9. THE LORDS OF FLATBUSH (1974)
Stallone puts on his leather jacket in this street-savvy film (at the time) in which he portrays Stanley Rosiello, a Brooklyn teen who is part of a gang that call themselves The Lords of Flatbush. Stanley has particular problems, since his girlfriend Frannie (Maria Smith) has announced that she is possibly pregnant. Only it turns out that she isn’t. Complications ensue.

8. ANTZ (1998)
In “Antz,” the first animated film from Dreamworks, Stallone voices the character of Corporal Weaver, who is a courageous soldier in the ants’ army and the best friend of a nervous ant nicknamed Z (Woody Allen). After Z changes places with Weaver and joins the army to impress princess ant Bala (Sharon Stone), he is inadvertently hailed as a war hero.

7. PARADISE ALLEY (1978)
Stallone’s feature directorial debut, “Paradise Alley” is set in the world of pro wrestling in the 1940s. Stallone plays Cosmo, one of three brothers all of whom are anxious to get out of Hell’s Kitchen to fulfill their dreams. Always on the lookout to make a buck, Cosmo convinces his brother Victor (Lee Canalito) to wrestle under the name Kid Salami and have brother Lenny (Armand Assante in his first screen role) become his manager.

6. F.I.S.T. (1978)
As the first film that Stallone starred in after “Rocky,” Norman Jewison‘s “F.I.S.T” finds him in a different world — that of the era of union organizing in the 1930s. Angered at the unfair labor practices on his loading dock, worker Johnny Novak (Stallone) leads a riot against the powers that be.  He’s fired, of course, but gets a job organizing workers for the Federation of Inter State Truckers (FIST).

5. DEATH RACE 2000 (1975)
“Death Race 2000” is the only film on this list that can be properly called a hoot. In Paul Bartel‘s dystopian fantasy, the U.S. Government, now a totalitarian regime, declares martial law, but to appease the disgruntled masses, they try to placate them by organizing the Transcontinental Road Race in which drivers in high-powered cars speed across the country, trying to hit as many pedestrians as possible to rack up big points.

4. FIRST BLOOD / RAMBO series (1982, 1985, 1988, 2008)
The popularity of the Stallone’s character of John Rambo in 1982’s “First Blood,” directed by Ted Kotcheff, led to an unexpected second successful franchise for Stallone. Rambo, a troubled Vietnam vet living in a small town with an abusive police force, uses his knowledge of weaponry and survival skills to fight back against the oppressive regime to make things right.

3. COP LAND (1997)
No matter in which what genre he’s ostensibly working, whether it be musicals (“Walk the Line”) or Westerns (“3:10 to Yuma”), James Mangold‘s films are character dramas.  And so it is here in the cop genre where Stallone faced the challenge of working with such great character actors as Robert De Niro, Ray Liotta and Harvey Keitel, and here, Stallone is very much their equal as an overweight town sheriff who sniffs out and tries to stop his town’s rampant police corruption.

2. ROCKY series (1976, 1979, 1982, 1985, 1990, 2006)
Until the end of time, Stallone will be known as that Philadelphia boxing champion Rocky Balboa. That first film, written by and starring Stallone, won the Oscar for Best Picture over this murderer’s row of nominees — “Bound for Glory,” “Taxi Driver,” “All the President’s Men” and “Network”!!  The series varied in quality after that, but Stallone remained committed to the character throughout.

1. CREED (2015)
With the final “Rocky” installment nine years prior, it looked like the franchise had come to its end. But it underwent a brilliant reboot by  Coogler, who approached the series from another angle, that of the family’s Rocky’s original opponent Apollo Creed. Apollo’s son Adonis (Michael B. Jordan, brilliant) wants to forge his own path in the boxing world, and he calls on Rocky Balboa to become his trainer. Nearly four decades after the first “Rocky,” Stallone deepened his original performance, giving the aging Rocky a world-weariness that he could never had otherwise achieved earlier in his career.

Jeremy Pope ('Hollywood') on playing an aspiring screenwriter: 'He wants to be the first person that…

What titles will end up at the Toronto and Venice film festivals amid coronavirus?