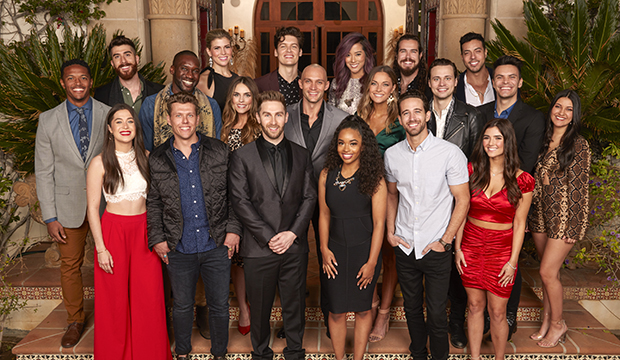 March 25 marked the 18th anniversary of the premiere of “The Bachelor,” and the franchise is arguably stronger than ever, coming off the Most! Dramatic! Finale! Ever! And now it’s set to launch yet another spin-off, the musically inclined “The Bachelor Presents: Listen to Your Heart.” Yeah, that title’s a mouthful, but just go with it.

With the coronavirus pandemic upending the entire world, “Listen to Your Heart,” which completed production before the virus spread, could be the last new “Bachelor” content that Bachelor Nation gets for a while. Production on Season 16 of “The Bachelorette” was postponed the day it was supposed to begin filming, and it’s unlikely summer staple “Bachelor in Paradise” will get off the ground in time. And with the Olympics postponed until 2021, the Olympic-themed “Bachelor Summer Games” has been scrapped.

In other words, you best savor “Listen to Your Heart,” Bachelor Nation.

Here’s what you need to know about it.

When does it premiere?
“Listen to Your Heart” bows on Monday, April 13 ad 8/7c on ABC, aka the usual Bachelor Nation timeslot. The show was meant to bridge the gap between “The Bachelor” and “The Bachelorette,” which was scheduled to premiere on Monday, May 18, but that’s definitely not going to happen anymore.

How long is the season?
Initially slated for six episodes — meaning it would’ve ended on May 18 — “Listen to Your Heart” might produce more episodes, according to Chris Harrison, to fill in some of the scheduling holes ABC will soon have due to the pandemic shutting down productions worldwide. A virtual reunion episode is also on the table if the series is successful.

It was inspired by Lady Gaga and Bradley Cooper’s Oscar performance
“Shallow” is just the gift that keeps on giving. Harrison revealed that the idea “Listen to Your Heart” was born after the pair’s sultry performance last year. “You know that moment at the Oscars when Lady Gaga and Bradley Cooper were together and we all thought they’re gonna drop to the floor and just make love? That’s the premise of the show,” he said. “Could we create that chemistry in love but also in music? That’s the whole premise of the show and what a great premise for a show. It’s genius. I have to give it up to [creator] Mike Fleiss. It truly is genius to have ‘A Star Is Born’ meets ‘The Bachelor.’”

How it works
The stakes are even higher on “Listen to Your Heart” because not only are these singles looking for love, but they’re looking for someone with whom to make beautiful music! The aspiring musicians will live together in a Bach Mansion and will try to find the perfect partner in life and work through music-themed dates and challenges.

In the early goings, the emphasis will be on the relationships as the contestants will be allowed to partner-swap, according to Harrison. Then it’ll get serious, and judges will eliminate people based on their performances and chemistry. “As these performances and these relationships get more and more serious, there’s a lot more on the line,” Harrison said. “Then it really does become about these performances, and can these couples have it all? Can you have a relationship, have that chemistry on stage but also perform?”

SEE ‘The Bachelor Presents: Listen to Your Heart” was inspired by Lady Gaga and Bradley Cooper’s steamy Oscar performance

It’s more like “Bachelor in Paradise” than the mothership
As there is no sole lead with twentysomething people trying to win them over, “Listen to Your Heart” is more like ensemble-fronted “Bachelor in Paradise.” “The women giving roses to the men, and then some men going home, and the men giving roses and some of the women go home,” Harrison explained. “‘And all the while, there is music in the background, and they’re trying to figure out who they could sing with, but it really is more about those types of rose ceremonies and it is a traditional rose ceremony that you would see in ‘Bachelor in Paradise.'”

In the premiere, 20 contestants — 12 men and eight women — will move in, and the first rose ceremony will have the ladies handing out roses, meaning four men will go home. New cast members will then enter the show. (ABC announced a cast of 23 contestants in February.)

There is a recording deal for the winning couple
Harrison teased that the show put together a “prize package” for the winners, but did not share more details. “The goal of this is a couple to find true love … but it is [also] to go out and perform, record music and to become a real duet, a professional singing duet,” he said.

SEE ‘The Bachelor Presents: Listen to Your Heart’ will work like another spin-off

Hold yourself over with these sneak peeks
ABC has released a few teasers for the show, highlighting music, making out, tears and guitar-smashing.

Familiarize yourself with the cast
Meet the 23 contestants in the gallery below. Their musical styles range from country and pop (duh) to neo soul and musical theater. If you’d like to hear them speak and/or see some of their personalities as well, here you go.

Never have I ever… The men and women of The Bachelor Presents: #ListentoYourHeart give us a breakdown of their dating history. pic.twitter.com/VX8GrNO7xc

Here for the love songs (and the romance) on this season of The Bachelor Presents: #ListentoYourHeart 😍 pic.twitter.com/CdO2A5vFU3

But will they find the right words to express their love? Find out when The Bachelor Presents: #ListentoYourHeart premieres April 13th! pic.twitter.com/mhlAfaihF9