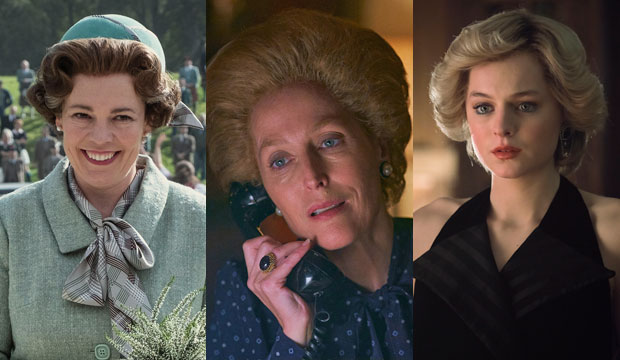 Netflix’s “The Crown” had a fantastic morning with Screen Actors Guild nominations, earning five bids. The majority of its kudos are all in the Drama Actress category, where Olivia Colman (who plays Queen Elizabeth II), Gillian Anderson (who plays Margaret Thatcher), and Emma Corrin (who plays Princess Diana) all earned citations as we predicted. They’re joined by Laura Linney and Julia Garner from “Ozark.”

While the drama series celebrates an embarrassment of riches this nominations morning – it also picked up bids for Drama Ensemble and Josh O’Connor in Drama Actor – will its over-performance in the Drama Actress category muddle its path to a victory?

SEE ‘The Crown’ and ‘Schitt’s Creek’ dominate 2021 SAG nominations, as everyone knew they would

Not necessarily, according to our exclusive odds for the nominations round. Our savvy prognosticators gave the edge to Colman, now a six-time SAG nominee with no solo victory to her name (she has one trophy already as an ensemble member of “The Crown”). This season will be her last chance to claim an individual prize for playing Queen Elizabeth; it certainly doesn’t hurt that she has a film nomination for “The Father” boosting her profile, too.

Colman doesn’t have this sewn up in a cake-walk, though. Both Anderson and Corrin earned more acclaim and buzz for this season, their first in their respective roles. Anderson is a SAG favorite actress with 10 nominations and two solo wins for “The X Files.” Corrin, meanwhile, is having a breakthrough moment, scoring her first Golden Globes bid for playing Diana and now competing alongside Emmy and Oscar-winning actresses.

It’s just as likely this royal tussle will leave all three empty-handed, though. With so many “Crown” contenders for fans to choose, the two “Ozark” actresses may have an advantage. Linney has eight SAG nominations and a win for “John Adams.” She’s on her third “Ozark” nomination without a victory, and the third season was her best yet. Garner has two Emmys for this role but no SAG trophy, so the actors may wish to do a bit of catch up and give her the win.