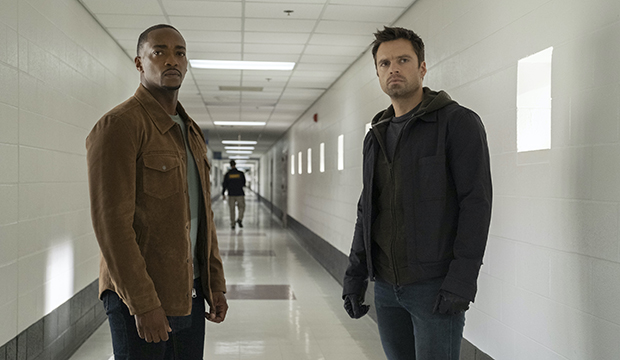 Marvel’s newest Disney+ series, “The Falcon and The Winter Soldier,” is nearly here, and just two weeks after the conclusion of the genre-defying “WandaVision.” If Marvel isn’t careful, we might get used to having new content every single week rather than just a few times a year.

This new show is an action drama that reunites Marvel stars Anthony Mackie and Sebastian Stan as Sam Wilson and Bucky Barnes, respectively, for a new globe-trotting adventure that promises to excite and entertain while also delivering some of the same banter and humor that made the duo one of the best parts of “Captain America: Civil War” (2016).

It’s been a while since we’ve seen Sam and Bucky in action, though, so you’ll be forgiven if you can’t remember what they were up to when we last saw them. As we prepare for the highly anticipated debut of the show and the return of the Marvel Cinematic Universe’s own version of “The Odd Couple,” we’re looking back at where Sam, Bucky and the rest of the characters were when we last saw them. And because we’re feeling generous, we even threw in an explanation for one of the new characters as well.

After being snapped out of existence by Thanos (Josh Brolin) at the end of “Avengers: Infinity War” (2018), Sam returned to help Steve Rogers, aka Captain America (Chris Evans), Tony Stark, aka Iron Man (Robert Downey Jr.), Thor, aka the God of Thunder (Chris Hemsworth) and the rest of the Avengers take on the big purple dude and his evil forces in “Avengers: Endgame.” In fact, he was the first person to return, so to speak, as he could be heard saying “Hey, Cap, you read me?” before stealing Cap’s “on your left” bit just as the portals opened to signal the return of the rest of the good guys in the climax of the film. In the closing moments of “Endgame,” Old Steve (also Evans) returned from the past to pass on Cap’s iconic shield to Sam, at which point Sam told him that the shield felt like it was someone else’s.

As revealed in the end credits scene of “Black Panther” (2018), Bucky’s HYDRA programming was finally removed by Shuri (Letitia Wright) after Steve asked T’Challa (Chadwick Boseman) for help in the mid-credits scene of “Civil War.” He was also snapped out of existence by Thanos at the end of “Infinity War” only to return with Sam and the rest of the superheroes in “Endgame.” But while Sam and Bruce Banner, aka the Hulk (Mark Ruffalo), were shocked when Cap didn’t return to the present day after returning the Infinity Stones to their rightful places in the past, Bucky knew his best friend wasn’t coming back, as evidenced by him telling Steve that he was going to miss him before he left. However, Bucky was surprised when Old Steve popped back up to pass on the shield. He and Sam walked over to Steve together, but Bucky hung back and encouraged Sam when Steve asked Sam to try the shield on.

Helmut Zemo was the main antagonist of “Civil War,” orchestrating the bombing of the U.N. in Vienna that killed Wakanda’s King T’Chaka (John Kani) and then framing Bucky for it. He did this because his family was killed during the Battle of Sokovia and he wanted to destroy the Avengers from within as revenge. So although he didn’t create the initial rift between Steve, Tony and the rest of the team, his actions certainly widened it, and by revealing to Tony that Bucky, as the brainwashed Winter Soldier, had been responsible for his parents’ deaths, he all but ensured a knock-down, drag-out fight between Steve and Tony, as the former was always going to defend his best friend. After having succeeded in driving what he thought to be the final wedge between Steve and Tony, Zemo planned to kill himself, but he was stopped just in time by T’Challa, who wanted him to suffer the consequences of his actions. The last time we saw Zemo, he was being locked away in a German prison cell under the careful eye of Everett Ross (Martin Freeman), the deputy commander of the joint terrorism task force in Berlin.

The last time we saw Sharon Carter, niece of Peggy Carter (Hayley Atwell) and former S.H.I.E.L.D. agent, she was working for the CIA and stationed in Berlin as part of Everett Ross’ joint terrorism task force. After the bombing in Vienna, she helped Steve (and Sam) by giving them classified intelligence so they could reach Bucky in Romania before anyone else. She then helped them again when, after they escaped custody, she broke the Sokovia Accords and stole Steve’s vibranium shield and Sam’s wings, aka “bird costume,” and returned them. Steve thanked Sharon with a kiss, but she hasn’t been seen in the MCU since. However, we know she was one of the people who was snapped out of existence by Thanos, as her face was one of those that could be seen as one of the fallen in “Endgame.”

Unlike Sam, Bucky and Sharon, Rhodey was not snapped out of existence at the end of “Infinity War.” He took part in the time heist alongside Cap and the rest of the Avengers in “Endgame,” accompanying Nebula (Karen Gillan) to Morag to get the Power Stone while Natasha (Scarlett Johansson) and Clint (Jeremy Renner) went to Vormir for the Soul Stone. He was present when the Hulk snapped his fingers to bring back everyone who had disappeared, but was knocked out of commission briefly when Thanos’ ship attacked the compound and his War Machine suit was compromised. He was able to join the battle against Thanos’ army after being rescued by Ant-Man (Paul Rudd) and was at Tony’s side as he died. The last time we saw Rhodey he was at Tony’s funeral, where he was leaning on Happy (Jon Favreau), though there was also a photo of him in “Spider-Man: Far From Home” (2019), if you want to get technical about it.

John Walker is one of the few new characters being introduced in “The Falcon and The Winter Soldier.” Marvel has been keen to keep his face out of promotional materials and trailers and has been pretty mum on his character. But we know he is one of the highest-ranking members of the U.S. military, and based on trailers for “The Falcon and The Winter Soldier,” it seems that he might be the government’s choice to take up the Captain American mantle instead of Sam. It will be interesting to see how the character, who was also known as U.S. Agent in the comics, interacts with both Sam and Bucky, and if/how he’ll contribute to the global fight that the two men find themselves in.

“The Falcon and The Winter Soldier” premieres Friday, March 19 on Disney+.