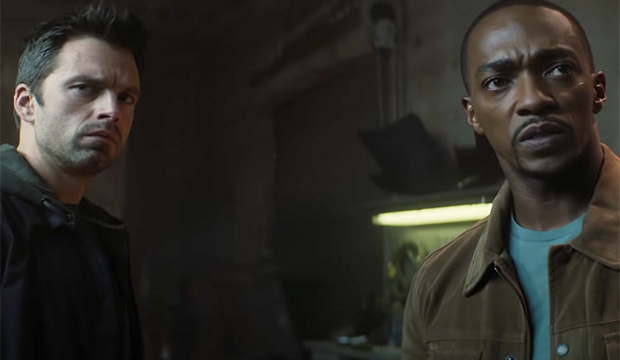 The Marvel Cinematic Universe’s expansion into television as a direct continuation of the overarching narrative of the blockbuster films officially kicked off in January with the debut of Disney+’s “WandaVision,” which has been a delightful mix of light and dark, funny and distressing. But it wasn’t supposed to be Marvel’s first series of Phase 4.

“The Falcon and the Winter Soldier,” starring Anthony Mackie and Sebastian Stan as Sam Wilson and Bucky Barnes, respectively, was meant to kick off this new chapter in the MCU, but filming on the series was shut down because of the pandemic with only a few weeks left of production. And because the series was shooting in Prague, the delay in returning to filming overseas forced Marvel to reshuffle a bit.

The good news is, Sam and Bucky will be back in action soon — March 19, to be exact — and in preparation for the debut of their six-episode Disney+ series, we’ve gathered the five most important things you should know before you watch.

1. The show is closer in nature to the action-heavy MCU films than “WandaVision”
Although “WandaVision” is poised to potentially change the trajectory of the MCU forever, it’s not your stereotypical Marvel project. It’s a cerebral series with little action to speak of (yet), so if that’s not your jam, you’ll likely be excited to know “The Falcon and the Winter Soldier” is heavy on the action. As you can see from the newest trailer below, which was released during the Super Bowl, the adrenaline-fueled series features plenty of punches being thrown in more of the same quality action sequences that made the films exciting. It’s easy to see why Marvel had intended to debut the Disney+ series with this show rather than “WandaVision”: it’s similar in style to the films in a way that makes it an obvious successor.

2. The series is a buddy comedy by way of “Captain America: The Winter Soldier” (2014)
Given the fun, slightly antagonistic dynamic between Bucky and Sam, which was on full display in “Captain America: Civil War” (2016), fans have been hoping for a buddy comedy featuring the two characters. It seems they’re sort of getting their wish. Head writer Malcolm Spellman has compared the tone of the series to the first “Lethal Weapon” film, as well as “Bad Boys,” “48 Hrs.” and even “Beverly Hills Cop.” In the trailer you can see that the two men still love to pick at one another, adding a sense of fun to the operation.

However, the show will also have a similar vibe to “The Winter Soldier.” Speaking to The Hollywood Reporter in April 2020, Stan compared the show to the popular second Captain America film, which is considered one of the best films in the entire MCU catalog. “Tonally, it was very much in the same world that ‘Captain America: The Winter Soldier’ was, which was one of my favorite experiences that I’ve ever had, period. So, in a sense, it was grounded and very much in the world as we know it. But, it’s also really jam-packed with a lot of massive, massive action scenes mixed with deep focus on character,” he explained.

3. It will determine who will be the next Captain America
Although Steve Rogers (Chris Evans) appeared as an old man at the end of “Avengers: Endgame” (2019) to pass on the iconic shield to Sam (seemingly with Bucky’s approval), it remains to be seen if Sam takes up the Captain America mantle after all. Not only will Sam struggle with the burden of potentially bearing such a heavy legacy, but in an interview with Rich Eisen in January, Mackie attempted to walk back previous interviews in which he said Sam would be the new Cap, explaining that Sam wasn’t sure he was worthy of the shield and that the series will pose questions about where the shield is going to end up, who the next Captain America will be, and if that particular moniker will ever be used again.

4. Sam might not even be the only person in the running to take on the Cap identity
Based on what we’ve seen in the trailer, it’s clear Steve has not been forgotten. The new footage hints at Sam attending either a funeral for Old Steve or a memorial because Young Steve has ostensibly gone missing in the present. A different TV spot seems to be set in what could be a museum, with Steve’s uniform and shield on display, so it’s possible Sam is simply attending a new Captain America exhibit. Whatever the case may be, one thing is certain: The U.S. is in need of a new Captain America, and it’s likely Sam won’t be the only person in the running to replace Cap.

Wyatt Russell is confirmed to be portraying the comic book character John Walker, aka U.S. Agent, on the show. In all of the teasers and trailers that we’ve seen, he’s only ever appeared once, with his back to the camera, as he runs onto a field in costume as Cap, seemingly for an introduction ceremony. While we don’t understand all the mystery surrounding the character, especially since Marvel has confirmed his existence, it seems the U.S. government might have a different idea of who should wield the iconic shield after Steve Rogers is laid to rest.

SEE ‘WandaVision’: Who is Agnes? And who is censoring the broadcast?

5. The cast will feature a few familiar faces from the MCU
Much like how “WandaVision” brought back a few familiar faces to fill out its ranks, “The Falcon and The Winter Soldier” will bring a few characters back into the fold too, most prominently Daniel Brühl as Baron Zemo. Having lost his family in Sokovia during the events of “Avengers: Age of Ultron” (2015), Zemo framed Bucky for the bombing that killed T’Chaka (John Kani) in “Civil War,” an event that eventually led to the fracturing of the Avengers. Although Zemo intended to end his own life in the aftermath, he was saved by T’Challa (Chadwick Boseman) and later imprisoned. When he returns in “The Falcon and the Winter Soldier,” Zemo will attempt to finish what he started and will finally appear wearing his classic villain mask.

Also returning is Emily VanCamp, who will reprise her role as Peggy’s niece, Sharon Carter, who was also last seen in “Civil War.” It seems the former S.H.I.E.L.D. agent is kicking ass and taking names, at least based on the short glimpse of her in the trailer. Meanwhile, Don Cheadle’s Rhodey, aka War Machine, will also appear. The Oscar-nominated actor revealed his involvement in the project during an interview with BroBible about his own upcoming Marvel series for Disney+ “Armor Wars.”

“The Falcon and the Winter Soldier” premieres Friday, March 19 on Disney+. Subsequent episodes will be released weekly.