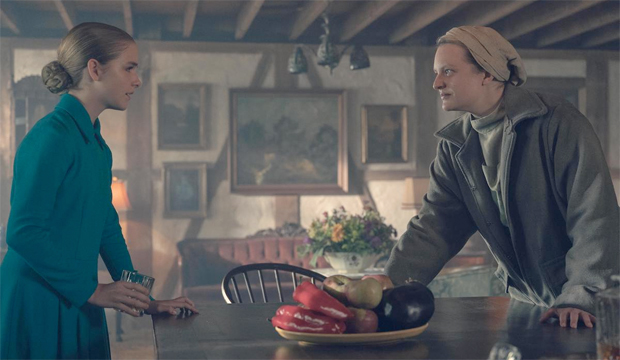 After a 20-month hiatus, Hulu‘s “The Handmaid’s Tale” finally returned for its fourth season, which premiered with three episodes on April 28 and concluded its 10-episode run on June 16. Last year, when the show competed for its third installment at the Emmys, it raked in 10 nominations and one victory, which certainly aren’t shabby but are, in fact, its lowest nomination and win totals to date. Will the TV academy send it better weather this year? Scroll down to watch our 10 exclusive video interviews with top Emmy contenders from the show.

Based on the classic 1985 dystopian novel by Margaret Atwood, “The Handmaid’s Tale” explores a near-future world in which a totalitarian theocracy has overthrown the United States government and created the nation of Gilead, where women are enslaved as ‘handmaids’ due to plummeting birth-rates and forced to bear children for the ruling class. The show premiered on Hulu in the spring of 2017 and was an instant hit at the Emmys, winning eight out of its 13 nominations, including Best Drama Series and Best Drama Actress for Elisabeth Moss. It was the first (and currently only) streaming series to win the drama program category.

The show’s fourth season picks up right where the third left off: with 86 children and nine Marthas  having landed on Canadian soil, the Waterfords (played by Joseph Fiennes and Yvonne Strahovski) still in a detention facility in Canada and a wounded June (Moss) on the run alongside a group of other handmaids. While this season aptly continues to highlight the monstrous realities within Gilead, it also spotlights the toll said realities have on Gilead’s escapees, for whom untethering themselves from the totalitarian patriarchal theocracy is an understandably onerous, if not sometimes impossible, effort. Even though the show delivers delicious and long-awaited moments of payoff and justice, it does not sugar-coat the fact that some of these are rooted and encrusted in the trauma and boundless rage of the characters, who process these emotional responses in entirely disparate ways.

After its already impressive nominations haul for season 1, the show piled on another seven citations for the first 10 episodes of season 2, which ended up parlaying three of its 20 bids into wins, for production design, editing and drama guest actress for Samira Wiley. Since the final three episodes of that season were not eligible for the 2018 Emmys, Hulu submitted them as orphaned episodes the following year, which is a risk that certainly paid off. Not only did the series end up being the second most shortlisted drama series of that year with 11 noms (just behind “Game of Thrones” with 32), but it also managed to retain its win total, bagging the Emmys for production and both drama guest categories for Cherry Jones and Bradley Whitford. As aforementioned, the show, despite holding onto its drama series nom, took a bit of dip for season 3 last year, missing out in a number of key categories, including writing, directing and actress for Moss, and going home with a single win for production design.

This time around, however, circumstances are different. As opposed to the show’s third season, which premiered almost an entire year before the 2020 Emmy cutoff date, its fourth aired in the heart of Emmy season and concluded just one day before nominations voting begins. It’s also one of the last eligible drama series to have aired in this Emmy cycle, which could put it top of mind for voters. And since many of last year’s contenders are out of the mix this year due to COVID-19, the field might be open enough for “Handmaid’s” — which, all things considered, was still strong enough to crack last year’s drama series lineup — to make a comeback across the board. Follow the links below to watch our 10 in-depth discussions with some of the show’s creative team.