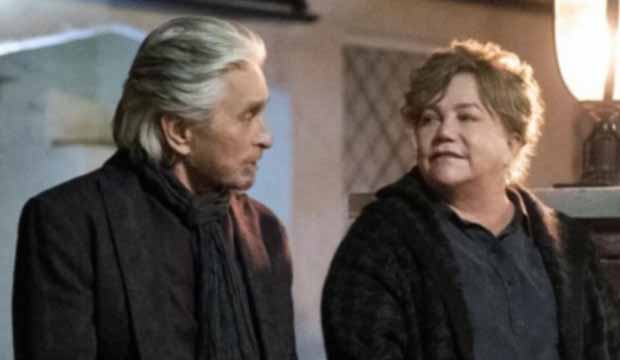 The third and final season of Netflix’s “The Kominsky Method” debuted on May 28 with a batch of six episodes that wrap up the story of Michael Douglas’ acting coach Sandy Kominsky. Written by Chuck Lorre, the swan song season picks up after the death of Sandy’s best friend Norman (Alan Arkin) and explores the highs and lows that follow. Scroll down to watch our three exclusive video interviews with top Emmy contenders from the series.

In Arkin’s absence, Kathleen Turner returned to the role of Sandy’s ex-wife Roz that she originated in one episode in season two. The show reunites her with frequent co-star Douglas, as the pair previously worked together on “Romancing the Stone” (1984), “The Jewel of the Nile” (1985), and “The War of the Roses” (1989). Turner has had a storied career on stage and screen, with an Oscar nomination in 1987 for “Peggy Sue Got Married,” two Golden Globes, and two Tony nominations, but she has surprisingly yet to receive an Emmy bid. “The Kominsky Method” could bring her her first.

The ensemble also boasts Sarah Baker as Sandy’s daughter Mindy and Paul Reiser as Mindy’s unexpected boyfriend turned fiancé Martin. Reiser earned 10 Emmy nominations for his series “Mad About You” as an actor and executive producer. “The Kominsky Method” was created and written exclusively by the prolific Lorre, who has nine Emmy nominations, including eight as an executive producer on “The Kominsky Method,” “The Big Bang Theory,” and “Two and a Half Men,” but like Reiser he has yet to win. Lorre will also contend for a writing nomination for the season three premiere.

The first two seasons of “The Kominsky Method” received six Emmy nominations, including two for Douglas, two for Arkin, and one for Comedy Series. The series also has six SAG and Golden Globe nominations, winning the Globe for Comedy Series and TV Comedy Actor in 2019. As the only incumbent comedy series nominee eligible to return to the 2021 Emmy race, “The Kominsky Method” may certainly stand out to voters as so many new shows vie for just eight slots. Follow the links below to watch our interviews with the cast and creator: