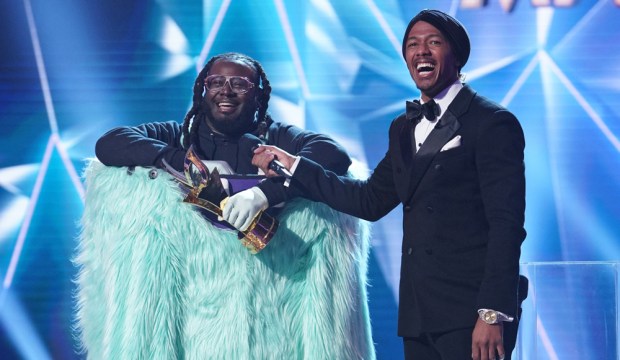 In late 2021, Fox’s reality TV show “The Masked Singer” took a trip down memory lane and revealed its Top 10 best performances of all time, ranked. At the time the special aired, the program was midway through its sixth season, so only performances from Seasons 1-5 were considered for this “All-Time Countdown.” In case you missed it, we’ve provided videos of all of these wild and wacky (and emotional) performances down below. As always, Nick Cannon hosted “The Masked Singer” retrospective. The all-star panelists are Robin Thicke, Jenny McCarthy, Ken Jeong and Nicole Scherzinger.

10. Donny Osmond as Peacock (Season 1)
Song: “The Greatest Show” by Hugh Jackman
This American icon and former teen idol wasn’t afraid to “Shake a Tail Feather” as he rocked the house to several hit songs, including the title track from the musical film. Donny Osmond managed to sing his way to second place in the first season of “The Masked Singer” while befuddling all but one judge, Jenny.

9. Omarion as Yeti (Season 5)
Song: “Lonely” by Justin Bieber & Benny Blanco
Robin was the only judge savvy enough to realize Omarion was masquerading as the abominable snowman since he first popped up as the final wild card. “This was a new challenge, to continue to broaden my range as a performer,” the former B2K member said during his unmasked interview.

8. Tori Kelly as Seahorse (Season 4)
Song: “My Heart Will Go On” by Celine Dion
All of the clues about previously appearing on a singing competition show are what convinced Robin and Nicole to name this former “American Idol” contestant as their final pick. “I feel more like an entertainer now,” Tori Kelly proclaimed after being unmasked as the colorful Seahorse.

7. Victor Oladipo as Thingamajig (Season 2)
Song: “Rainbow” by Kacey Musgraves
This NBA All-Star showed off his hidden musical talents on “The Masked Singer” and developed a flirtatious relationship with Nicole, who he brought to tears with his voice. Perhaps more shocking than Victor Oladipo’s voice was the fact that Ken was the only judge to guess his true identity following a later performance of “Winter Wonderland” by Bing Crosby.

6. Bow Wow as Frog (Season 3)
Song: “Jump” by Kriss Kross
Despite being a front-runner all season long, this rapping and hip-hopping amphibian had to settle for third place in the grand finale of Season 3. Two of the panelists correctly guessed Bow Wow’s true identity, while the other two were ribbittingly wrong.

5. Gladys Knight as Bee (Season 1)
Song: “Wrecking Ball” by Miley Cyrus
This legendary soul diva belted her way into the Season 1 finale and relished the ability to put her spin on modern classics like “Wrecking Ball.” For Gladys Knight’s final performance she sang “I Can’t Make You Love Me” by Bonnie Raitt and by that point her unmistakable tone was just too obvious to fool the judges (well, except Ken).

4. Jesse McCartney as Turtle (Season 3)
Song: “Fix You” by Coldplay
Throughout the season the panelists’ guesses included every boy band member known to man, but in the end it proved to be singer-songwriter Jesse McCartney. One of the physical clues, a photo album, notably teased the heartthrob’s early career as an actor on soap opera “All My Children.”

3. LeAnn Rimes as Sun (Season 4)
Song: “When the Party’s Over” by Billie Eilish
How fitting that Sun won the Golden Mask — after all, this shining star was the first contestant to perform in the fourth season and set the bar extremely high with her “Cuz I Love You” cover. Throughout the competition the panelists threw out all kinds of guesses, but in the end both Jenny and Nicole guessed Sun was actually child singer LeAnn Rimes.

2. Wayne Brady as Fox (Season 2)
Song: “Try a Little Tenderness” by Otis Redding
This five-time Emmy winner, comedian and Broadway star had developed a plan from day one to confuse the panel and lead them to believe he was Jamie Foxx. As the weeks passed by, Wayne Brady wowed viewers with his voice, dance moves and charisma as the Fox. Following his final performance of “Try a Little Tenderness,” Brady won the Golden Mask and became the Season 2 champion.

1. T-Pain as Monster (Season 1)
Song: “Stay With Me” by Sam Smith
This chart-topping rapper and hit-making producer made history as the first winner of “The Masked Singer.” As the Monster, T-Pain was able to put his singing prowess at the forefront while keeping his identity hidden until the very end.