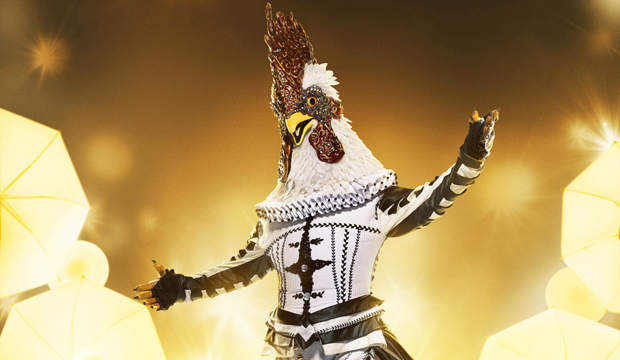 “The Masked Singer” producers have kept us tuned in by shaking the format every season. The fifth edition included the introduction of the Cluedle-Doo. This costumed celebrity isn’t competing for the Golden Mask. Rather he is regaling us with clues about the contestants.  He appeared in front of the four judges (Ken Jeong, Jenny McCarthy, Nicole Scherzinger and Robin Thicke) for the first time on “The Sing-A-Long: The Maskie Awards,” which aired April 28.

This special episode included a slew of clips of the Super 6 (Black Swan, Chameleon, Piglet, Robopine, Russian Dolls and Yeti) raising their voices in song. And we saw snippets of Cluedle-Doo in previous appearances delivering tantalizing teases about their real identities.

He also delivered a long-awaited first clue about himself: “I’m not just a roaster rooster who likes to cause chaos; I’m an undercover celebrity myself. I have a connection to another mischievous masked singer from the past, the Gremlin.” Keep reading for “The Masked Singer” spoilers, including the real name of the Cluedle-Doo.

The Gremlin was a contestant on season 4 of “The Masked Singer” who lasted only one episode. Rather than face the judgement of the judges after he sang “Stand by Me” by Ben E. King, he bowed out of the competition and revealed himself to be the Oscar-nominated actor Mickey Rourke.

“The Masked Singer” producer Brian Strickland has also offered up several clues about the Cluedle-Doo. He says this celebrity has never appeared on the show before now. That rules out the likes past contestants Wayne Brady and Brian Austin Green as well as guest judges Joel McHale and Craig Robinson. Strickland describes the person playing the Cluedle-Doo as a big name in show biz.

Putting all of these clues together, we think that the Cluedle-Doo is Donnie Wahlberg. Don’t agree? Take a minute to read our rationale and then sound off with your thoughts in the comments section below.

Wahlberg co-starred in the crime drama “Bullet” with Rourke back in 1996. That movie marked Wahlberg’s film debut after his meteoric rise to fame as part of the boy band New Kids on the Block in the late 1980s. The quintet sold a whopping 70 million albums before splitting in 1994.

Wahlberg went on to carve out a career in film and TV, including a memorable appearance in the 1999 blockbuster “The Sixth Sense” opposite Bruce Willis (who we thought might be the Cluedle-Doo).  He currently headlines the CBS police drama “Blue Bloods,” which was just renewed for a 12th season.

Wahlberg has an even more personal connection to the show than that one film appearance with Rourke. His wife, Jenny McCarthy, is one of the panellists. She is forever guessing that he is one of the costumed contestants so it is about time that he made an appearance.