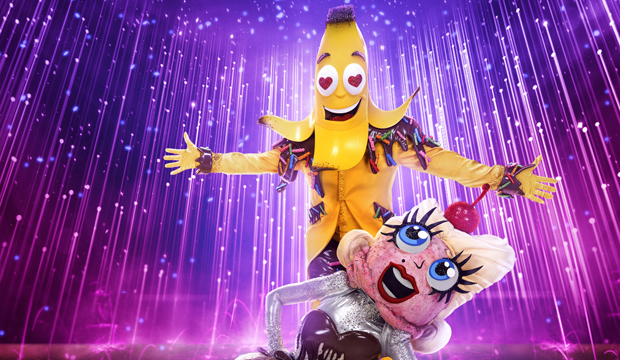 We love “The Masked Singer” and are thrilled that another set of famous faces is paired up in season 6, disguised this time as Banana Split. In season 4, we had the Snow Owls (who turned out to be husband and wife Clint Black and Lisa Hartman) and in season 5 the Russian Dolls were revealed to be the Hanson brothers.

The duo that is hidden inside the Banana Split costume first performed on the September 29 episode of “The Masked Singer,” made their second appearance on the October 13 episode and returned to compete again on November 3. That last performance earned them a place in the Group B semifinal on November 17 where they edged out Caterpillar and Mallard for a spot in the final. On December 8, they face the Queen of Hearts for a place in the final against the Group A champion, Bull.

We’ve been reviewing all the clues since their debut and have all “The Masked Singer” spoilers, including the answer to the question, “Who are Banana Split”?

On episode 3, the female half of this duo, who is dressed as ice cream, sang a soaring version of “A Million Dreams” from “The Greatest Showman.” She returned in episode 5 to deliver a blistering cover of torch song “Cry Me a River” and followed that up with a rollicking rendition of “Let ‘er Rip” by The Chicks on episode 7 and then a jaw-dropping take on Lady Gaga‘s “Poker Face” in episode 9. Her other half, done up as a banana, played the piano. Our first thought when we saw them was that the Banana Split is husband and wife David Foster and Katharine McPhee. Their personal and professional bios fit with the clues too.

He is a musical maestro with a slew of songwriting and producing credits to his name. She is an “American Idol” runner-up (that would account for the silver medal seen in the video and the Banana’s reference to “reality” as an ingredient in good love song) and would certainly qualify as a “big break.” McPhee parlayed that into starring roles on TV’s “Smash” and “Scorpion” and the Broadway musical “Waitress.”

In the sneak peek special we saw three red dice, each with the number “2.” Their son was born on February 22 of this year.

As a group, this season’s contestants on “The Masked Singer” have won 27 Grammy from 85 nominations. Foster, who is a prolific record producer, accounts for more than half of both those wins (16) and nominations (47).

Foster also won one of his five Emmy races (between them, the celebrities on the show this season have contended for TV’s highest honor a dozen times). And he accounts for all three of their Oscar nominations, having reaped bids for Best Original Song for “The Glory of Love” from “The Karate Kid Part II” (1987); “I Have Nothing” from “The Bodyguard” (1993) – which was referenced with that plate of “nothing”; and “The Prayer” from “Quest for Camelot” (1999).

McPhee is Foster’s fifth wife; he is her second husband. The 17 contestants on the show this season can count 32 marriages and 20 divorces between them.

We won’t know for sure if the Banana Split are Katharine McPhee and David Foster until they are unmasked. That will happen when they loses an audience vote or wins the show. Do you think we are right about the true identity of the Banana Split? Sound off in the comments section with your best guesses.