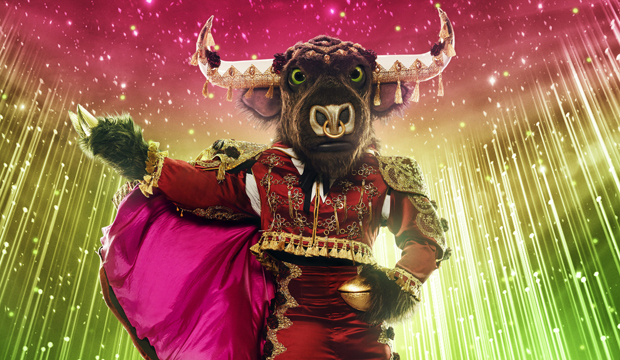 Among the 18 celebrities competing on season 6 “The Masked Singer” season 6, the Bull has one of the best voices. He has been tipped as a frontrunner to win the Golden Mask since he made his debut as part of Group A on the September 22 premiere. Back then, he nailed his cover of Train hit “Drops of Jupiter,” which closed out the show. Since then he has sung “What Hurts the Most” by Rascal Flatts on episode 2, “Circus” by Britney Spears on episode 4, the Bob Dylan classic “Make You Feel My Love” on episode 6, the Lady Gaga/Ariana Grande duet “Rain on Me” on episode 8 and “Straight Up” by Paula Abdul on episode 9. We are in no doubt as to the true identity of the music man inside the Bull costume. Keep reading for all “The Masked Singer” spoilers including the answer to the question, “Who is Bull”?

The Bull is Todrick Hall. We know that the star masquerading as the Bull is a seasoned performer, someone who has the confidence to start one number standing behind the four judges — Ken Jeong, Jenny McCarthy, Nicole Scherzinger, Robin Thicke — before strutting onto the stage. The Bull’s roar is rich and robust and is always the stand-out performance of the night.

We had a hint of things to come on the preview special when we heard Bull briefly raise his voice in song. He delivered a scorching cover of “Circus.” It included a piercing scream that is an eerily exact echo of the one heard on Hall’s 2019 hit “Nails, Hair, Hips, Heels.”

The preview special included a set of clues for the Bull – photos of lions and tigers. Oh my, we can’t help but think of that famous scene from “The Wizard of Oz” when Dorothy, the Scarecrow and Tin Man express their fear of encountering such creatures. In 2016, Hall’s second album, “Straight Outta Oz,” paid homage to this 1939 film classic, right down to the ruby red lettering used for the word “Oz.” Hall hails from Plainview, Texas, home to one of the biggest beef processing plants in the country.

On episode 1, the Bull sang “Drops of Jupiter.” Beyond sounding exactly like Hall, the Bull gave us clues that confirm our theory. He referenced Forbes magazine, which included Hall in their “30 Under 30 To Watch” issue. That reference to Hollywood taking notice is an allusion to Hall’s stint on “American Idol,” where he stood out during Hollywood week. And the Bull’s declaration that he is his own boss fits in with Hall’s bio and his quest for success via his own YouTube channel. One of his biggest viral hits was a cover of Hunter Hayes‘ “Invisible”; there was a shot of Hayes as the Astronaut on Season 3 of “The Masked Singer” in the Bull’s video package.

On episode 2, the Bull performed a scorching cover of “What Hurts the Most” punctuated by some jaw-dropping falsetto notes that were extremely high and difficult for anyone to hit. The various clues in the video package all confirm our theory. The shot of the cheerleaders ties in to Todrick in two ways – he was on the pep squad in high school and he came to fame in part based on his spoof of that classic movie about competitive cheerleading, “Bring It On.” And that photo of the Disney Concert Hall in L.A. references his last name as well as his start as a dancer at Disneyland and his recent recording of a song, “Magic Happens,” played during parades at the theme park.

On episode 4, the Bull got the room rocking to “Circus.” So many of the Bull’s dance moves are familiar to fans of Todrick. And we saw a shot of another iconic music venue, Carnegie Hall, that includes his surname.

On episode 6, the Bull made “Make You Feel My Love” his own. Once again, we heard Todrick’s signature voice as the Bull crooned this ballad. His surname was once again referenced with a photo of pop duo Hall & Oates.

On episode 8, the Bull showed his vocal versatility by taking on both parts of the duet “Rain on Me,” which was a huge hit for Lady Gaga and Ariana Grande while delivering some deft dance moves. Hall is well-known for his toe-tapping, with appearances in Broadway musicals (“Chicago,” “The Color Purple,” “Kinky Boots” and “Memphis”) and a stint as choreographer on “RuPaul’s Drag Race.”

And on episode 10, the Bull had fun with the Paula Adbul dance classic “Straight Up.” The rainbow racing flag we saw was a reference to Todrick’s time on “Drag Race.” And the Bull revealed he has performed in the Richard Rodgers Theatre on Broadway, which is currently home to “Hamilton.” Hall was in the revival of “Chicago” that ran there for years.

SEE ‘The Masked Singer’ spoilers: Who is Queen of Hearts?

We won’t know for sure that the Bull is Todrick Hall until he is unmasked. Do you think we are right about the true identity of the Bull? Sound off in the comments section with your best guesses.