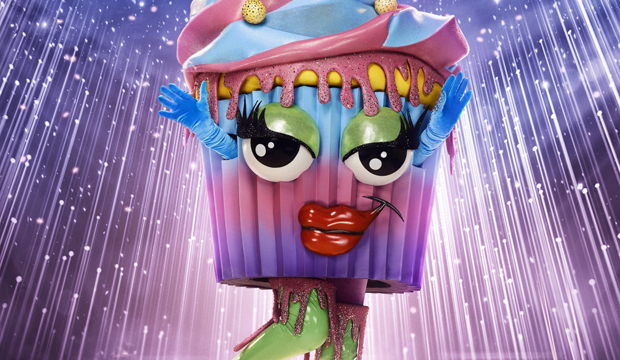 Season 6 of “The Masked Singer” is shaping up to be the most competitive to date. Half of Group A have already been sent packing: Octopus (Dwight Howard), Mother Nature (Vivica A. Fox), Pufferfish (Toni Braxton) and Baby (Larry the Cable Guy). This week it is Group B that is in the spotlight. On September 29, the first of the Group B contenders, Dalmatian, was unmasked and revealed to be Tyga. On October 13, the remaining Group B contenders are performing again disguised as Banana Split (a duo), Cupcake, Mallard and Queen of Hearts. They are joined by the new Wildcard, Caterpillar.

We’ve been reviewing all the clues that teased their first appearance and have “The Masked Singer” spoilers, including the answer to the question, “Who is Cupcake”?  We readily admit that this is the toughest of the bunch because we only got a fleeting glimpse of the Cupcake in the sneak peek special.

We can clearly see that the person inside the costume is someone who is used to performing. They show a lot of stage presence and are fairly petite. The four judges (Ken Jeong, Jenny McCarthy, Nicole Scherzinger, Robin Thicke) are certainly impressed by their talent.

On episode 3, Cupcake sizzled with a cover of “Heatwave” by Martha Reeves & the Vandellas. And on episode 5, Cupcake offered up a creamy version of “Finesse” by Bruno Mar. While the vocals are rich and deep, they are that of a woman of a certain age.

We think that the Cupcake is Ruth Pointer. This 75-years-young singer enjoyed great success with her siblings as The Pointer Sisters. Remember, the first clue was of a compass “pointing” north.

Aside from sounding just like this veteran soul singer, the Cupcake shares many of her milestones.

The Cupcake admits its been many years since she sang solo. She joined her sisters in song way back in 1972, after they had had some limited success after being discovered at the Whisky a Go Go club (the clues package included a bottle of whiskey). They went on to be one of the biggest acts of the 1970s and 1980s.

As a quartet (with Anita, Bonnie and June) and then a trio after June left, the group contended for 10 Grammys and won three. “The Masked Singer” contestants have taken home 27 trophies and racked up 85 nominations.

The Cupcake confessed that she likes “Air Time.” The girls had one of their biggest hits with “Jump (For My Love).” And she admits that she just can’t “hide her emotions”; that is a variation of a line from their smash record “I’m So Excited.” Another of their hits, Slow Hand,” was referenced in that caution sign.

The Cupcake reflected on losing someone close to them recently; Bonnie Pointer died in 2020. And she readily admitted she wished she had not been married so many times. Ruth Pointer has been with her fifth husband, Michael Sayles, since 1990 and they welcomed fraternal twins Conor and Ali in 1993. The Cupcake confessed to Cannon, the father of seven including twins with Mariah Carey, that they both knew “double trouble.”

We won’t really know if we are right that the Cupcake is Ruth Pointer until they are unmasked. That will happen when they lose an audience vote or win the show. Sound off in the comments section with your best guesses as to the true identity of Cupcake.