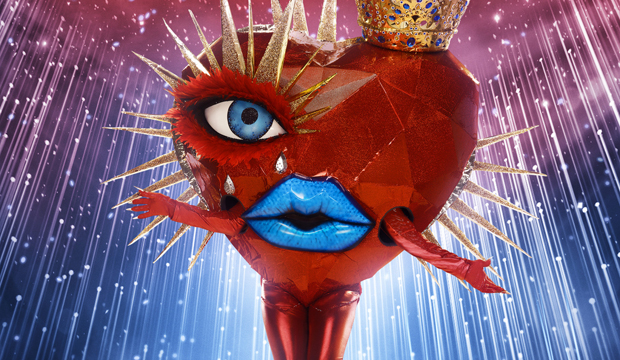 “The Masked Singer” season 6 is jus episodes from revealing the winner. Vying in the final against the Bull is one of our all-time favorites, the Queen of Hearts. She won us over in the premiere and she has sailed through the competition since then. We’ve been scouring the clues dropped to date and have all “The Masked Singer” spoilers, including the answer to the question, “Who is the Queen of Hearts”?

She earned her place in the final by edging out the other remaining contestants in Group B, the duo in the Banana Split costume, on December 8. They were revealed to be composer David Foster and his wife, “American Idol” alum Katharine McPhee. We weren’t shocked when their identities were revealed by host Nick Cannon.

And we are equally sure of who is the Queen of Hearts and have been since we first heard her in the sneak preview special that aired on September 12. She delivered a heart-rending cover of the Edith Piaf classic “La Vie en Rose,” which was shown again on episode 5.

Before the first episode, the producers released a series of teases about the famous faces hidden inside these masks. Among the facts revealed was that one of “The Masked Singer” contestants had made out with Sean Penn. Combine that with the stat that, as a group, they can brag of bagging 27 Grammys from 85 nominations and we are sure we know the name of the Queen of Hearts.

While the temptation is to say Madonna, who was married to the actor in the 1980s, we are convinced that the Queen of Hearts is Jewel. The singer/songwriter dated the two-time Oscar winner in the mid 1990s. And she has earned four Grammy nominations since her smash debut album “Pieces of You” back in 1995.

Jewel accounts for just one of the 32 marriages and one of the 20 divorces of this season’s contestants as her union with pro rodeo cowboy Ty Murray ended in 2014 after 16 years together. Her ties to him (they have a son) would explain the photo we saw in the sneak peek of a horse in a field.

On episode 3, the Queen of Hearts nailed her cover of “Born This Way” by Lady Gaga and did likewise on episode 7 with her version of “River” by Bishop Briggs, in episode 9 with her take on the Patsy Cline classic “She’s Got You” and in episode 11 with “Bird Set Free” by Sia. Before she sang each song, she teased us with a series of clues that only confirm our theory.

The Queen of Hearts, who is shaped like a jewel, confessed that she grew up in a house that lacked warmth; Jewel was born in Utah but raised in Alaska.

One clues video concluded with a photo of Hilary Swank. The two-time Oscar winner is an animal lover and had a dog named Jewel.

SEE ‘The Masked Singer’ spoilers: Who is Bull