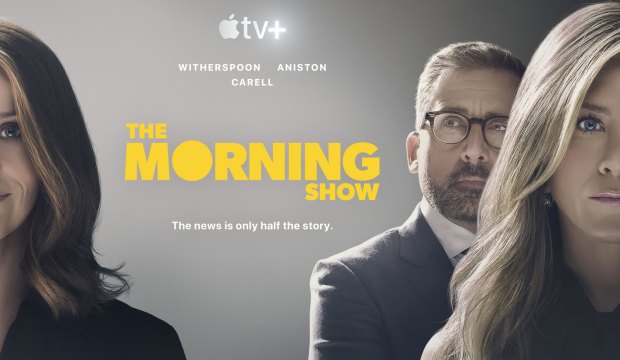 The streaming service Apple TV+ launched in the fall of 2019, and with it came the outlet’s flagship drama “The Morning Show,” which takes place behind the scenes of a morning TV news program in turmoil after it’s rocked by a sexual misconduct allegation. Will it rack up Emmys this fall? Scroll down for our exclusive video interviews with some of the top awards contenders from the show.

Jennifer Aniston executive produces the series and also stars as Alex Levy, the host of “The Morning Show” whose partner at the anchor desk, Mitch Kessler (Steve Carell), is abruptly fired for his abusive behavior in the workplace. As corporate vultures at the network circle the vulnerable program, Alex suddenly selects firebrand reporter Bradley Jackson (Reese Witherspoon, who is also an executive producer) to be her new co-anchor.

“The Morning Show” was a hit with awards voters right out of the gate. It earned Golden Globe nominations for Best TV Drama Series and Best TV Drama Actress (for both Aniston and Witnerspoon). It was nominated for Screen Actors Guild Awards for Aniston, Carell and Billy Crudup‘s performances (Aniston won). And Crudup won a Critics’ Choice Award for Best Drama Supporting Actor for his role as an opportunistic network executive.

But how will it do with the industry insiders who vote for the Emmys? Aniston previously won an Emmy for Best Comedy Actress her work on “Friends,” and Witherspoon won for producing the HBO series “Big Little Lies,” so both are already familiar favorites of the television academy. Carell was a perennial nominee for Best Comedy Actor for “The Office,” but never won, so the Emmys might want to make it up to him.

Showrunner Kerry Ehrin is a two-time Emmy nominee, for Best Comedy Series as a producer of “The Wonder Years” (1990) and Best Drama Series as a producer of “Friday Night Lights” (2011). And the directing team includes Emmy winners Mimi Leder (“ER”) and Michelle MacLaren (“Breaking Bad”). That’s a formidable pedigree. Follow the links below to see what some of the show’s creative team has to say.

SEEEmmy spotlight: Why Gugu Mbatha-Raw’s performance is crucial to ‘The Morning Show’s’ success