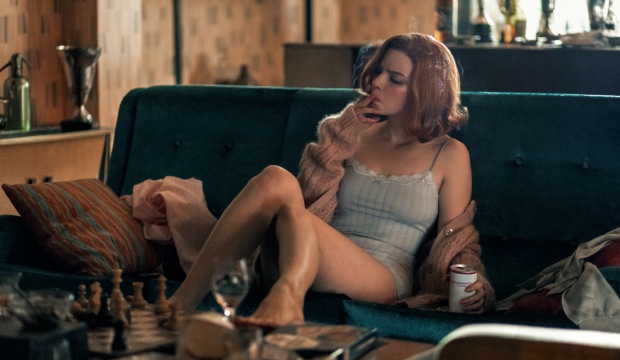 Anya Taylor-Joy is winning. For her acclaimed leading performance as fictional 1960s chess prodigy Beth Harmon in “The Queen’s Gambit,” she now leads Gold Derby’s combined racetrack odds in the Best Movie/Limited Actress race at both the Golden Globe and Critics’ Choice Awards. Cate Blanchett of “Mrs. America” remains the Screen Actors Guild Award frontrunner, but Taylor-Joy has been climbing in our odds all season. The ingenue ranked 34th when the SAG predictions event launched in the Gold Derby predictions center in early October. She surged to 14th at the start of November, had climbed to fifth by the start of December, placed third at the start of 2021 and is now in the runner-up position.

Her seven-episode miniseries adapted by Scott Frank from the 1985 novel of the same name by Walter Tevis co-stars Marielle Heller, now a Critics’ Choice Award nominee for Best Movie/Limited Supporting Actress. “The Queen’s Gambit” itself is now favored for Best Limited Series wins from both the Golden Globes and Critics’ Choice. Its ascent has been similarly dramatic, opening in 22nd for the former in early October and getting to 11th by November, fifth by December, second by New Year’s Day and overtaking “Unorthodox” for the top spot in the January 8 chart.

Netflix announced a month after the program’s October release that it was their most-watched limited series ever; Nielsen notes it as the first program to top their streaming chart for three consecutive weeks. In addition to its commercial success, “The Queen’s Gambit,” Metacritic ranks it second in their aggregate of critics’ top-10 lists of the best shows of 2020, trailing only fellow miniseries “I May Destroy You.”

Taylor-Joy is anticipated to reap her first two Golden Globe nominations next month, as she is also expected to score a Best Comedy/Musical Actress bid on the film side for the theatrically-released “Emma.” She ranks fifth for the eponymous role of that feature adaptation of the 1815 novel of the same name by Jane Austen.