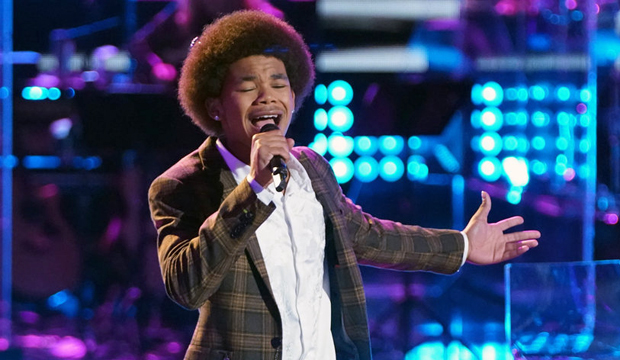 The knockout round performances of a landmark 20th season of “The Voice” came to a close this week, narrowing each of the four teams led by coaches Kelly Clarkson, John Legend, Nick Jonas and Blake Shelton down to five artists each, though one from each is currently pending as we await the results of the four-way knockout. With 10 years of excellent “Knockouts” behind us and before we get into the “Live Top 17 Performances” on May 10, Gold Derby contributors Denton Davidson and John Benutty break down their favorite knockout performances of all time and select the few they saw this season that were TKOs.

John: Hey Denton — let’s just right into it with the knockouts because I have a sneaking suspicion that we’re in agreement about which performance stood out this round. You’ve been really high on Cam Anthony all season and I must say while I’ve been on Team Victor Solomon so far, there is no denying how mindblowingly incredible Cam was this round. When he revealed that he’d be singing “Feeling Good” I was nervous because I’ve noticed over the decades I’ve been watching singing competitions that this particular song can be a death strike for performers — it’s a song that sent Adam Lambert to the bottom two in the final 5 of “American Idol” season 8 and didn’t save Tamara Jade last season, for instance — but Cam delivered what is, without a doubt, the best rendition of that song I’ve ever heard, including Wé McDonald‘s four chair turn blind audition of it. Cam is every bit a star and this knockout would have easily won against any other performed this year or in any other. Sometimes there are artists that only need one great performance on the show to secure the win, and right now I’m thinking Cam locked up season 20 with this knockout. It’s unforgettable.

Denton: You will get no argument from me, John. Cam just knocked it out of the park and made an old classic feel modern. Everything from his vocal choices, to the impeccably tailored suit and the perfectly placed pick in his newly styled afro. He was ready for this moment and he delivered. If Cam continues to perform at this level it will be embarrassing if he loses. Kelly has to be frustrated knowing that she finally blocked Blake from the best country singer of the season (Kenzie Wheeler) and now the cowboy has ended up with this soulful phenom everyone thought would choose John. It’s kind of hilarious and it was a brilliant move on Cam’s part.

John: Admittedly I’m having a really hard remembering most knockout performances from the past because now I only want to watch Cam’s on repeat, but one that remains equally unforgettable for me is from two seasons ago. CamWess sang “Say Something” so gorgeously that it makes me as emotional as Kelly on any given day, and his competition Megan Danielle was able to counter with a just as compelling rendition of “Piece by Piece.” Kelly had the toughest decision to make with these two performances and while she ultimately chose Megan as the winner, John snatched CamWess in a steal and rode the wave with him all the way to a 4th place finish, two spots above Megan’s finishing spot. CamWess had one of the more interesting runs on “The Voice” — he joined Team Legend after the blinds, lost his battle round and was picked up by Kelly, then lost his knockout and came back to Team Legend, and then became a finalist. Goes to show that you don’t always have to win your round in order to make a lasting impression on the coaches or the audience.

Denton: One of the most memorable knockouts for me was back in Season 14 when Terrence Cunningham took on Christiana Danielle for Team Alicia Keys. Terrence was the early front-runner to win that season and nailed his passionate, soulful performance of “Tell Me Something Good.” The guy was a master musician! But the sleeper was Christiana who belted out a haunting, dramatic rendition of “Elastic Heart” that left me dying to hear more from her. It wasn’t a surprise that Terrence won the knockout since most of the coaches thought he would become the champ at that point, but Christiana inspired three coaches to push their save buttons, and she ultimately stuck with Alicia. In a strange twist of events, these two highly talented singers both made early exits. Terrence was eliminated before the Top 12 and Christiana only snuck into the Top 10. It was a crazy season.

John: In season 13 there was one particular head-to-head that gave me total David vs. Goliath energy between Karli Webster and Janice Freeman for Team Miley Cyrus. As the David in this situation, Karli’s “Blue Bayou” was perfectly gentle and sweet, unassuming but capable of putting up a strong fight against most competitors. Unfortunately for Karli she was up against the Goliath of Janice’s “I’m Goin’ Down,” a monstrous roar of a performance where she channeled all the passion and strength of Mary J. Blige and still found a way to make it her own. What I love about this knockout is how different the performances are, underscoring a point that “The Voice” as a show makes quite often that powerful vocals like Janice’s can make a loud, in-your-face statement rather easily but that more delicate vocals like Karli’s can deliver just as much of a punch.

Denton: I actually chose another knockout from that same season and that same team: Ashland Craft vs. Chloe Kohanski. Ashland was a formidable country singer and gave a smooth, effortless performance of “Wanted Dead of Alive.” It was a fun, country spin on a rock classic and she ultimately won this knockout because of her range and style. On the other hand, Chloe went a more delicate route with “Landslide” and I think that is when she officially became the front-runner to win. Unfortunately, everybody but Miley could see it. Ashland was chosen to advance for Team Miley and Chloe was swept up by Blake and the rest is history. In fact, that whole season was filled with disastrous decisions by Miley. She not only let the champion go in the knockouts, but she let the runner-up (Addison Agen) slip away to Adam in the battles. Ouch!

John: Another legacy knockout that I’d like to highlight is from an artist that lost — Shalyah Fearing from season 10 taking on “Broken Wing” for Team Pharrell Williams. At the time I think Pharrell was looking for atypical artists with voices that broken from the usual path. I believe that’s why he chose Emily Keener‘s “Big Yellow Taxi” as the winner of this head-to-head, but Shalyah delivered the kind of vocal that is literally a knockout. It was here that she came into her own with an ability to hit big notes and stretch out her range, and being scooped up by Adam Levine helped chart a course for her to the semifinals. Shalyah was only 15 when she performed her blind audition and showed great maturity as she went through the season. We’ve learned season in and season out that youth should never be underestimated.

SEE‘The Voice’: Now you can predict who will win Season 20 … and who will be eliminated

Denton: I’m gonna kick it old school with my last choice and go way back to Season 5 when Matthew Schuler rocked the house with a hair-raising performance of “Cosmic Love.” This truly felt like a knockout as Matthew paced across the stage hitting one huge note after another like a left hook followed by an uppercut. But what I loved most about it was the unconventional song choice and the unique way he delivered it. Christina Aguilera really had no choice but to pick Matthew over Will Champlin, who delivered an impressive yet completely predictable performance of “When I Was Your Man.” Will ultimately outlasted Matthew after being stolen by Adam Levine and finishing third, while Matthew went home in sixth place. But the winner of this knockout can’t be disputed.

John: I think the knockouts might be one of my favorite rounds because unlike in the battles the artists get to choose their own songs. While they choose their song for the blind audition, by the knockouts they’ve established a concept for what kind of artist they want to be on the show and their song selection here can really make or break the rest of the season. Once you get into the lives the coaches start having a little more influence, so I love that the artist builds their own foundation here in this round.

Denton: The artists really do begin to come out of their shells by the knockouts and I love seeing how they all progress. It’s always interesting to see a one-chair turn take down a four-chair turn by showing substantial growth since the blind auditions. Or perhaps the coaches just start forming stronger relationships with them and get a better feel for who they enjoy working with? Either way, the knockouts are always full of surprises.