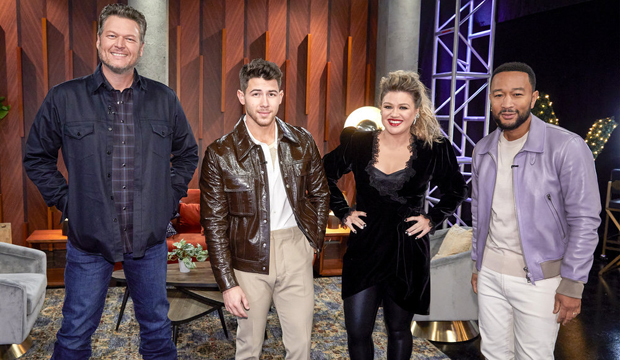 “The Voice” returns to the NBC lineup on March 1 with the two-hour premiere of season 20. This will be first of six episodes showcasing the first stage — the blind auditions — of this singing competition. Keep reading for everything to know about “The Voice” season 20.

The three mainstays among “The Voice” coaches will be back in those revolving red chairs: Kelly Clarkson, John Legend and Blake Shelton. And Nick Jonas returns as a coach after a successful debut in season 18, when he mentored Thunderstorm Artis to a third-place finish. Shelton’s fiancee Gwen Stefani pinch hit for the in-demand Jonas during Season 19 last fall. She coached Carter Rubin to victory.

Blake has been with the show since the start, while Clarkson  is marking her lucky seventh stint as a coach and John is on his fifth season. Not surprisingly, Shelton holds the records for most wins (seven) while Clarkson can claim three victories  and Legend has one to his name.

In the blind auditions, we get to see the contestants but the four judges must make their decisions based solely on the quality of the singing. Only if they are won over by the voice do they hit their button so that their chair turns and they can see the singer. If more than one judge turns, the contestant gets to hear each make their case before deciding on whose team they wish to be.

SEE ‘The Voice’ Coaches Rankings: All 14 From Worst to Best

For those contestants that do not inspire even one judge to hit their button, their time on “The Voice” is over. For those that make it through they must then survive the battle rounds to move on to the live shows. This year’s Battle Advisors are Grammy winner Brandy (Team Legend), Emmy winner Darren Criss (Team Nick),  Grammy winner Luis Fonsi (Team Kelly), and Grammy-winner Dan + Shay (Team Blake).

Everything To Know About 'The Voice' Season 20