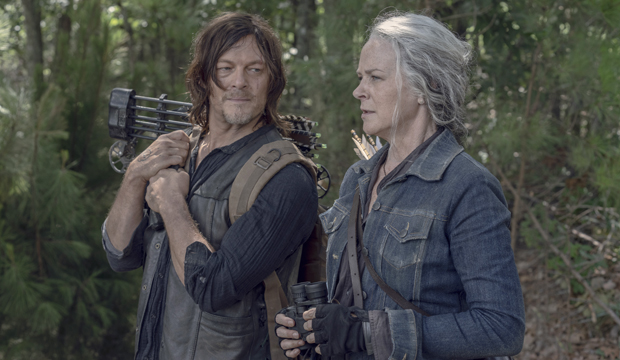 All good things must come to an end, which is why “The Walking Dead” viewers weren’t surprised when AMC announced the zombie apocalypse drama would conclude in 2022 after 11 seasons. The good news? There are still eight episodes left for fans to enjoy. The great news? The story of Daryl (Norman Reedus) will continue after the flagship “TWD” series walks off into the sunset. Previously the spin-off was supposed to center on Daryl and Carol (Melissa McBride), but AMC announced on April 27, 2022 that McBride is “no longer able to participate” in the project because of filming logistics, as first reported by TV Line.

Here’s everything to know so far about “The Walking Dead” spin-off with Daryl (but no longer Carol). Bookmark this page as we’ll be updating when new information is revealed.

SEE‘The Walking Dead’ deaths in order: Most shocking of all time

Norman Reedus will star
Yep, the actor is officially back as his iconic character from the original show. Unlike the main series where he was supporting a larger ensemble, he will officially be the lead of this new drama. And we wouldn’t have it any other way. In terms of his awards history, Reedus received seven People’s Choice Awards nominations and four Academy of Science Fiction, Fantasy & Horror Films bids for playing Daryl.

Show title is forthcoming
Your guess is as good as ours about what the new series will eventually be called, but we’d love to hear your guesses down in the comments section. Keep in mind that all previous spin-offs in the universe have included “Dead” somewhere in the title. One of our favorite suggestions is “The Walking Dead: The Next Chapter.”

When will it air?
The Daryl spin-off will be set and filmed in Europe in Summer 2022 and is expected to premiere sometime in 2023. “Relocating to Europe became logistically untenable for Melissa at this time,” AMC revealed about why McBride left the program.

Behind-the-scenes talent
Current and former “TWD” showrunners Angela Kang and Scott M. Gimple created the new series for AMC, based on Robert Kirkman‘s graphic novels. We expect that many of the other writers, directors and creative talents will also hop on board the Daryl train, though nothing has been confirmed quite yet.

Reedus teases a “show of hope”
Here’s what Reedus told “Talking Dead” host Chris Hardwick about the upcoming series: “The new spin-off show I’m really excited about, I have to say. I’ve always loved the relationship with Daryl and Carol and we play off each other so well. It’s a different type of a show. It’s a show of hope. It’s not two groups fighting each other for territory or something like that. It’s she and I on the road seeing who’s left out in the world. It kind of opens up a lot of possibilities.”

What is “Isle of the Dead”?
Yet another spin-off, titled “Isle of the Dead,” has also been green-lighted. This one will feature former enemies Negan (Jeffrey Dean Morgan) and Maggie (Lauren Cohan) who are now working together. Cohan recently explained how the two characters are “not friends” in the spin-off, which makes sense considering that Negan killed Maggie’s husband.