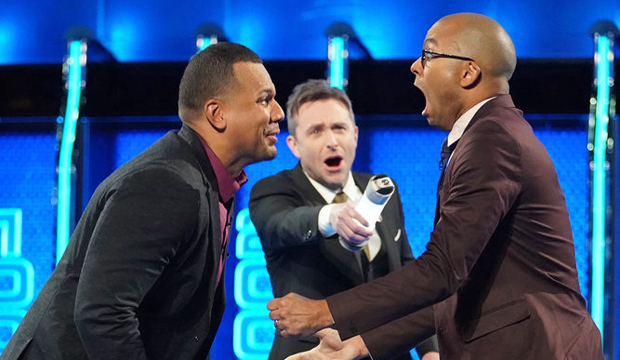 “The Wall” is the most expensive game show on television, with upwards of $12 million on the line for the lucky pairs of contestants. Alas, no one has ever claimed that much money — the biggest haul to date is under $2 million — but that doesn’t stop people from trying. Chris Hardwick hosts the LeBron James-produced reality TV show, which first debuted December 19, 2016 on NBC. Scroll through our photo gallery above to see “The Wall” winners list of million-dollar records through the years.

The program tasks pairs of loved ones with answering trivia questions and trying their luck on the 40-foot-tall Plinko-style wall. Correct answers turn the balls green and add money to their bank; incorrect answers turn the balls red and steal money from their total. At the end of each episode, the contestants must decide whether to take the guaranteed amount (their Free Fall earnings plus a bonus for correct answers) or tear up the contract and risk it all for whatever is remaining on the wall (which could be nothing).

SEE‘Who Wants To Be A Millionaire’ Winners List: Photos

Brothers Hecthan and Hector from the Bronx have the all-time winning record at $1,749,907. They competed in the 11th episode of Season 3, with Hector backstage answering questions and Hecthan on stage making all of the wall decisions. The siblings started off shaky, earning a low Free Fall amount of $15,400. Hector answered two of six questions correctly, for a bonus of $40,000. Thus, their contract guarantee was a paltry $55,400. Luckily, Hector tore up that contract and went with what was on the wall instead … a whopping $1.7 million.

“There was something that was very seductive about doing a big, flashy game show,” Chris told Gold Derby in 2018 about what made him want to host “The Wall.” “When it’s done right, it’s amazing.” The show is unique in that it finds contestants who have “given more than [they’ve] taken out of life.” Hardwick believes this gives viewers “an emotional way into the show … where you actually care about the story of the people.” He proclaimed, “I really do root for all of them.”