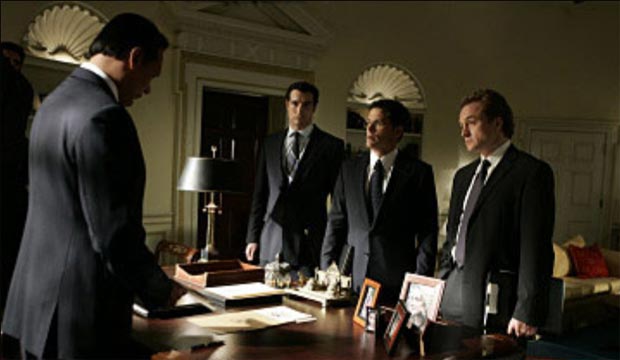 Ahead of the 2020 presidential election, “The West Wing” cast is staging a reunion on HBO Max. Creator Aaron Sorkin and executive producer/director Thomas Schlamme are putting together a theatrical staging of episode “Hartsfield Landing” for this fall. Titled “A West Wing Special to Benefit When We All Vote,” it is designed to create awareness for a nonprofit organization former first lady Michelle Obama.

Throughout its seven season run, the show racked up an impressive 95 Emmy nominations and 26 wins, including a record-tying four consecutive prizes in Best Drama Series (2000-2003). In its first season alone, it broke the record for most victories in a single season with nine (“Game of Thrones” surpassed it in 2015 with 12). Alan Alda, Stockard Channing, Janney, Schiff, Spencer and Whitford all won individual acting prizes, while Mary Louise Parker, Lowe, Moloney, Parker and Sheen earned nominations.

Where does “Hartsfield Landing” fit among the greatest of all “West Wing” episodes (if it made the cut at all)? Tour our photo gallery above ranking the top 20 from worst to best. Our list includes the “Pilot,” Christmas episodes “In Excelsis Deo” and “Noel,” “Two Cathedrals,” “Let Bartlet Be Bartlet” and more.