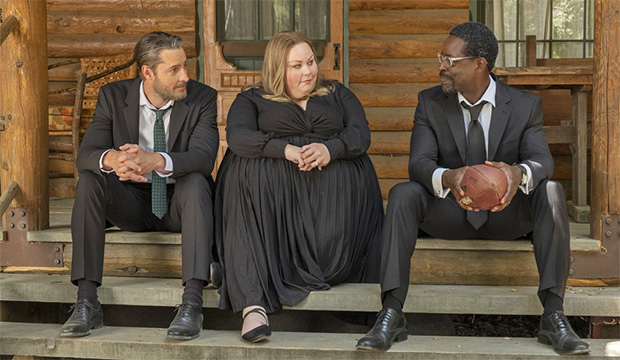 If you’re like us, you were blubbering so much during the “This Is Us” series finale on Tuesday, May 24 that you worry you may have missed something important. Fear not, Pearson fans. Creator/producer/writer Dan Fogelman recently gave his thoughts on the show’s final moments while attending a TV Academy event with cast members Mandy Moore (Rebecca), Milo Ventimiglia (Jack), Chrissy Metz (Kate), Chris Sullivan (Toby), Sterling K. Brown (Randall), Susan Kelechi Watson (Beth), Justin Hartley (Kevin) and Jon Huertas (Miguel). Read on for “This Is Us” ending explained: What happened in the series finale?

“Hey”
The episode begins with Rebecca and Jack waking up together in bed approximately a decade into their marriage and saying, “Hey,” which is a direct callback to the previous episode when Rebecca dies and tells the spirit of Jack, “Hey,” on a train car. Jack notices a scar below Rebecca’s eye for the first time and the two reflect on when they first met. Since Randall’s Mathletes event was canceled, Jack and Rebecca decide to have a lazy Saturday with the family playing games and enjoying each other’s companies.

Family bonding
While carefree Kate (Mackenzie Hancsicsak) is more than happy to go along with their plans, Randall (Lonnie Chavis) and Kevin (Parker Bates) think family day is cheesy and want nothing to do with it. Jack bonds with his sons by teaching them how to shave. He then talks to them about the themes of the episode, that special moments are always happening but you often don’t know they’re special until much later in life. Eventually the entire Pearson clan is playing pin the tail on the donkey, a game Jack and Rebecca purchased years ago because a blended family like theirs was depicted on the box.

Deep-fried Oreos
In the present-day storyline, the older versions of the Big Three are preparing for Rebecca’s funeral. Randall and Beth play a final game of worst case scenario, and then they make a reference to “deep-fried Oreos.” That comes back into play later when Randall reveals it’s a reference to Iowa, a state in which all aspiring Presidential candidates must visit to kick off their campaigns. We’re led to believe that Randall is going to run for President, in part to make his mother proud.

Katoby forever
Toby admittedly oversteps his bounds as Kate’s ex-husband when he tells her that he’ll always love her, and that he wishes he could take a ride in Doc Brown’s DeLorean and go back to when they met at a support group for eating disorders. When he tells her that was a reference to “Back to the Future,” she rolls her eyes and says she knows — after all, she was married to him.

Baby William
In a moment that brings on the waterworks, an adult Deja tells Randall that she’s going to name her son William. Even though she never met Randall’s biological father, she says that he must have been great because of the way Randall turned out. Randall starts jumping around excitedly because, after fathering three girls, there’s finally going to be a baby boy in the family. In a flashback that was filmed around the time of the “Memphis” episode in Season 1, William (Ron Cephas Jones) talks to Randall about what it means to be a grandparent. Yes, the show has been holding onto this scene for five years — talk about planning!

Drifiting
Kevin, Kate and Randall have their final scene together on the show, and it’s an emotional one in which Kate confesses she’s worried they’re going to start drifting away from each other. The brothers disagree, saying if anyone drifts away they’re going to do their best to pull them back into the fold. The trio then recites their Big Three motto for the last time. Then Randall wonders aloud what it meant when Rebecca squeezed his hand for the last time before dying.

‘This Is Us’ ending explained
The final moments of the show intercut between Rebecca squeezing Jack’s hand on the train, the present-day Pearson family at Rebecca’s wake, and Jack and Rebecca playing pin the tail on the donkey with their kids. As Randall looks out at his family, we flashback to Jack looking out as his own. It’s the circle of life and love. And we fade to black.

Fogelman reveals that the flashback scenes were filmed “three years ago, primarily to capture [Hancsicsak, Chavis and Bates] in a moment of time when it would feel nostalgic to us and to the audience … We shot three or four days worth of material [and then] put it away and never looked at it again.” About two months ago, Fogelman asked his editors if he could see the footage for the first time and he breathed a sigh of relief, saying, “Okay, we have it. It’s really good. I knew that was gonna be the final shot of the episode, going from Lonnie and wrapping to Milo, watching his father watching the family.”

The showrunner adds, “My favorite couple of minutes of the series probably is the last couple of minutes of this episode, which for me is like kind of a cool way to go out, right? For me personally it’s just my favorite part. That cue is my favorite cue, that big sweeping score that’s playing at the end.” If the music theme in the series finale sounded familiar, that’s because composer Siddhartha Khosla used it one time before on the show, in the fifth episode of Season 1. In that classic scene, Kevin gives a painting to Randall’s daughters and talks to them about the meaning of life. “What if life is a painting and we’re all in it?” he asked at the time (watch below).