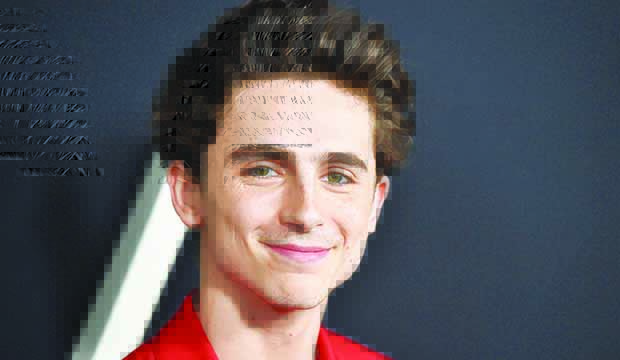 Timothee Chalamet has quickly emerged as one of the more unique Hollywood leading men in recent years. With his lanky frame, brooding vigor and deeply felt sensitivity, the 25-year-old has become one of the most notable stars of his generation. His career began in TV movies and series, with recurring roles on such shows as “Homeland” and “Royal Pains.” He made his film debut in the Jason Reitman film “Men, Women & Children,” in a relatively minor part. Those smaller roles continued through 2016 in films like “Interstellar” and “The Adderall Diaries,” playing younger versions of principal characters.

While Chalamet had a handful of substantial roles in indie movies, like 2016’s “Miss Julie,” everything changed the following year with the release of “Call Me by Your Name.” The actor’s sensitive portrayal of a 17-year-old finding his first great love garnered universal praise and landed him an Oscar nomination for Best Actor. That same year, he had a supporting role in “Lady Bird,” another big awards player, and went on to reunite with writer-director Greta Gerwig in 2019 for “Little Women.” He received more critical attention in 2018 for his performance as a drug addict in “Beautiful Boy,” earning nominations from the Golden Globes, SAG, BAFTA and Critics’ Choice.

Through it all, auteur directors have lined up to work with Chalamet, with two big releases in 2021. The actor is part of the huge ensemble of Wes Anderson‘s “The French Dispatch” and leads Denis Villeneuve‘s highly anticipated adaptation of  “Dune.” Even at his young age, Chalamet has dabbled in just about every film genre, including comedies, dramas, sci-fi, westerns, crime, period pieces, and even a Christmas movie. His highly specific style continues to resonate with audiences as he refuses to rest on his laurels moving into the next stage of his career.

Do you agree with our rankings for his 15 best film performances so far? Our list includes a brief description plus the trailer for each movie.

In his feature film debut, a dramedy about relationships in the internet age by Jason Reitman, Chalamet plays a minor role. The young actor plays Danny, a high school jock. Many of Chalamet’s scenes were deleted from the film before its release.

Chalamet plays the obnoxiously named Gatsby Welles in Woody Allen’s 2019 romcom. The actor leans too much into the pretensions of his character, a rich NYC college student whose romantic life takes some unexpected turns. Following Dylan Farrow’s sexual abuse allegation against Allen and the growing MeToo movement, Chalamet donated his salary for the film to various charities.

Shortly after playing the younger version of Casey Affleck in “Interstellar,” Chalamet played a younger James Franco in this crime thriller. Both actors play Stephen Elliott, a real-life author writing about a murder trial. Chalamet’s part is small and confined to flashbacks depicting Stephen’s troubled childhood.

This Christmas comedy centers on the dysfunctional Cooper family, with an all-star cast that includes Diane Keaton, John Goodman, Marisa Tomei and Amanda Seyfried. Chalamet plays Charlie, one of the younger members of the family. While not given much to do, the film provided the actor the opportunity to work with some industry legends.

Chalamet gets to show off his multilingual skills in Scott Cooper’s revisionist Western. In a small role, the actor plays Philippe Dejardin, a French-speaking private who joins Christian Bale’s Capt. Joseph J. Blocker in escorting a dying Cheyenne war chief to Montana.

In his first film released theatrically after his Oscar nomination, this crime drama tells the story of Danny, who discovers a lucrative drug trade on Cape Cod. Chalamet stars as the lead character, who also falls in love with his partner’s sister, causing messy complications.

Not long into his career, Chalamet worked with one of the major film auteurs of our time, Christopher Nolan, on this space epic. The actor plays the younger version of Casey Affleck’s character, Tom, the son of Matthew McConaughey’s Joseph. While his part is small, Chalamet does a close enough approximation to Affleck’s mannerisms that the eventual transition feels natural.

Chalamet takes center stage in the middle part of Wes Anderson’s anthology film, playing a student activist in well over his head who strikes up a relationship with a veteran journalist, played by Frances McDormand. Chalamet nails the deadpan nature of Anderson’s dialogue and his chemistry with McDormand is offbeat and unexpected. In a movie loaded with movie stars and multiple Oscar winners, it’s Chalamet who arguably steals the entire show.

One of Chalamet’s first leading roles is in Julia Hart’s directorial debut, about a teacher who drives three of her high school students to a drama competition. Chalamet plays one of the students, Billy, who struggles with a behavioral disorder. But like the actor himself, it is apparent that Billy has a gift for performing.

While Chalamet may feel like a particularly contemporary actor, he defied expectations with this medieval war drama. As King Henry “Hal” V of England, Chalamet expertly taps into the young royal’s reluctance toward responsibility as he must balance wartime politics and his own personal squabbles.

This raw family drama tells the real-life story of David Sheff (Steve Carell) and his strained relationship with his son, Nic (Chalamet), who is struggling with drug addiction. Chalamet’s expressive performance earned him nominations at the four major precursors (SAG, BAFTA, Golden Globe, Critics’ Choice) but the Oscars shockingly passed him over in the end.

Denis Villeneuve’s epic adaptation of Frank Herbert’s classic science-fiction novel puts Chalamet in the center of the action, quite literally, as the young prince who could very well become king of the universe. Chalamet handles the film’s numerous fight scenes and setpieces with aplomb, but his internalized performance goes a long way toward capturing the ambiguity his character, Paul Atreides, feels about his fate.

Greta Gerwig’s solo directorial debut brims with great performances, particularly Saoirse Ronan as the impatient title character and Laurie Metcalf as the mother she can’t get along with. While Chalamet did not earn the accolades of Ronan or Metcalf, he certainly makes a big impression as Kyle, a brooding, pretentious teenager who typifies the bad boy you fell in love with in high school but now try to forget.

Chalamet teamed up with Ronan and Gerwig again for the latter’s 2019 adaptation of Louisa May Alcott’s classic tale. The actor co-stars as Laurie, neighbor to the March family who becomes close to Jo (Ronan) and Amy (Florence Pugh). Chalamet’s sensitive energy helps accentuate the pain of Laurie’s unrequited love for Jo.

Luca Guadagnino’s sensual coming of age story turned promising newcomer Timothee Chalamet into bonafide leading man Timothee Chalamet. Playing Elio, a 17-year-old boy who falls in love with his father’s graduate student (Armie Hammer), the actor possessed a raw naturalism and physicality that caused critics and audiences to take notice. He went on to become the third-youngest Best Actor nominee in Oscar history for his performance.