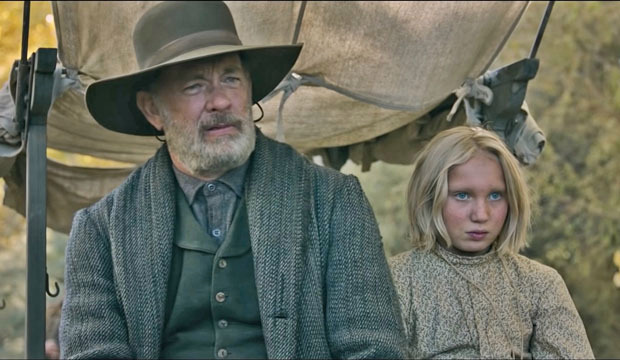 Zoom conversations this awards’ season rise and fall with the moderator. Case in point, the recent zoom converso with Tom Hanks, Helena Zengel and writer/director Paul Greengrass of Universal’s western drama “News of the World” was funny, informative and thought-provoking thanks to moderator. Billy Ray, who was Oscar-nominated for his screenplay for the last Hanks/Greengrass collaboration, 2013’s “Captain Phillips.”

“I guess my first question would be why on Earth did you cut the Somali pirate segment that I wrote for the film?” Greengrass quipped , harkening back to “Captain Phillips,” in which Hanks’ ship is hijacked by Somali pirates. “I don’t understand. It was so critical.” “It was Tom,” replied Greengrass, laughing. “Tom said, ‘I’m not doing any more Captain stuff.’ And I said, ‘But you are the Captain.’’’ “Well,” mused Hanks.

Set in 1870, “News of the World” finds Hanks playing a Confederate veteran Captain Kidd who travels to small towns in Texas to read the news of the world. His life changes when he is told by the U.S. Army to return Johanna (Zengel), a young girl who had been captured by the Kiowa six years later, to her relatives.

The acclaimed “News of the World,” which recalls John Ford’s 1956 masterpiece “The Searchers,” has been receiving awards buzz especially for German-born Zengel, Dariusz Wolski’s cinematography and James Newton Howard’s score. And Greengrass and Luke Davies won the National Board of Review honor for best screenplay.

Greengrass noted he grew up watching Westerns on TV in England. “I remember ‘Bonanza’ as a kid-that was always on in the U.K. on Saturday night. The romance of the West.” But as is the case of the best films of the genre, “News of the World” is so much more than a “Western.”

“I think you can say it is a post-Civil War film, but in the end, it’s the story of a lonely newsreader who lost everything,” said Greengrass. “He comes upon this girl and they go on an adventure. The adventure is a journey out of dark times, to something hopeful. And that for me, made it incredibly contemporary and incredibly affecting because just two wonderful characters go on a wonderful journey.”

Hanks pointed out that as “pieces of commerce” there are a lot of arguments against making Westerns. “The thing that Westerns have always had for them was some kind of gunplay and justice against long odds. That wasn’t nearly as interesting as what we had in hand, which is the story of Captain Kidd and young Johanna or Cicada as she’s known. And that timeless theme, that timeless story of very damaged people becoming better.”

And, he added, one is looking for “big obstacles” that can keep the story from happening too easy. “In that regard, the Western was absolutely fantastic,” noted Hanks. “I think to be an actor in that-I just ended up liking the slower, plodding pace. I mean you can’t get from Point A to point B any faster than our horse Wimpy would walk.”

“Had he not found Johanna what would have happened to this man-what would he have been five years later?” asked Ray. “Paul and I were talking constantly about this,” said Hanks. “Everything about your character backstory-wise is really something you can only carry around in your pocket. It can only be this burden and weight that you yourself bring into every scene because there’s not a lot of way to dramatize it.”

Kidd, Hanks noted, is not a young man, had his whole world crash and burn a decade earlier, “I felt as though he wanted to sneak into town, do his bit and then sneak right out of town, leaving as little ripple as possible. I think if he had not taken charge of a being…stumbled upon this task at hand, I think he would have shriveled up and died in nothingness. “

“Do you think for Kidd, the news became his version of preaching?” Ray asked Hanks. “In that the news is the truth,” replied Hanks. “We didn’t plan on making a movie with themes ripped out of today’s headlines. We were taking the concept of reading the news from this perspective-that there are no such things as alternative facts. There are interpretations of facts, but truth is the truth. You can’t alter the temperature of the sun, nor the speed of water, nor the numbers of people who were dying because of Scarlet fever.” Kidd, Hanks added, “put on a good show. He made sure people got 10 cents of quality entertainment.”