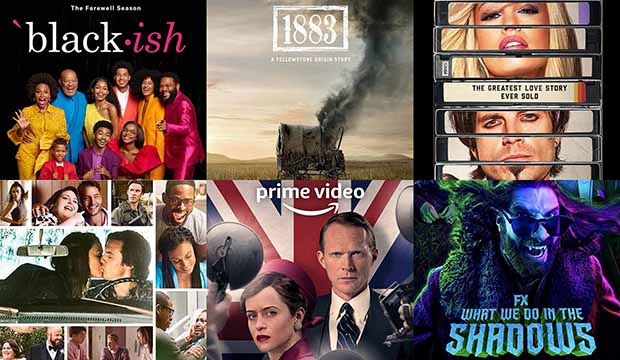 Six top TV costume designers will reveal secrets behind their projects when they join Gold Derby’s special “Meet the Experts” Q&A event with 2022 Emmy Awards contenders. They will participate in two video discussions to premiere on Wednesday, May 25, at 4:00 p.m. PT; 6:00 p.m. ET. We’ll have a one-on-one with our senior editor Daniel Montgomery and a roundtable chat with all of the group together.

Synopsis: A couple struggles to gain a sense of cultural identity while raising kids in a predominantly white, upper-middle-class neighborhood.

Bio: Michelle R. Cole was an eight-time Emmy nominee for “Black-ish” and “In Living Color.” Other projects have included “Martin,” “Committed,” “The Bernie Mac Show,” “The Soul Man” and “Grown-ish.”

Synopsis: Follows the Dutton family on a journey west through the Great Plains toward the last bastion of uncolonized America.

Bio: Janie Bryant was a seven-time Emmy Award nominee for “Deadwood” and “Mad Men,” with one win for “Deadwood.” She received two wins from 10 nominations at the Costume Designers Guild Awards. Other projects have included “The Last Tycoon,” “The Romanoffs” and “Why Women Kill.”

Synopsis: Follows the story of Pamela Anderson and Tommy Lee’s relationship, going back to their whirlwind romance that started with them marrying after only knowing each other for 96 hours in 1995.

Bio: The career of Kameron Lennox has included “Untogether,” “SMILF,” “The Rental” and “Physical.”

This Is Us (DTS and NBC)

Synopsis: A heartwarming and emotional story about a unique set of triplets, their struggles and their wonderful parents.

Bio: Hala Bahmet was a two-time Emmy nominee for “American Crime Story” and “This Is Us,” also receiving a nomination from the Costume Designers Guild. Other career projects have included “House of Sand and Fog,” “Bringing Up Bobby,” “Sweetwater,” “The Purge: Anarchy,” “Riverdale” and “Young Sheldon.”

Synopsis: The story of events surrounding the notorious divorce of the Duke and Duchess of Argyll during the 1960s.

What We Do in the Shadows (FX)

Synopsis: A look into the daily (or rather, nightly) lives of three vampires, who’ve lived together for over 100 years, on Staten Island.

Bio: Laura Montgomery was a two-time nominee at the Costume Designers Guild Awards for “What We Do in the Shadows.” Other career projects have included “The Smart Woman Survival Guide,” “Andy and the Upside,” “The Shrine,” “Servitude” and “The Barrens.”