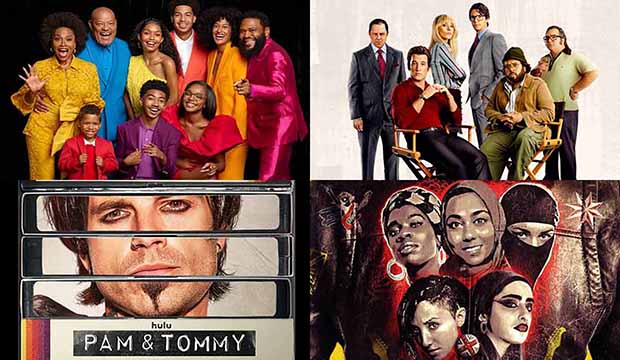 Four top TV showrunners will reveal secrets behind their projects when they join Gold Derby’s special “Meet the Experts” Q&A event with 2022 Emmy Awards contenders. They will participate in two video discussions to premiere on Thursday, May 19, at 4:00 p.m. PT; 7:00 p.m. ET. We’ll have a one-on-one with our senior editor Daniel Montgomery and a roundtable chat with all of the group together.

Synopsis: A couple struggles to gain a sense of cultural identity while raising kids in a predominantly white, upper-middle-class neighborhood.

Bio: Courtney Lilly was a four-time Emmy nominee for “Black-ish.” He has also been nominated at the Writers Guild Awards for “Everybody Hates Chris” and “Arrested Development.” His career has also included “My Boys,” “Guys with Kids,” “The Cleveland Show,” “Mixed-ish” and “Grown-ish.”

Bio: The career of Nikki Toscano has included “Revenge,” “Bates Motel,” “State of Affairs,” “Shades of Blue,” “24: Legacy” and “Hunters.”

Synopsis: Follows the story of Pamela Anderson and Tommy Lee’s relationship, going back to their whirlwind romance that started with them marrying after only knowing each other for 96 hours in 1995.

Bio: Rob Siegel was a Writers Guild Awards nominee for “The Wrestler” and at the Independent Spirit Awards and Gotham Awards for “Big Fan.” Other projects have included “The Onion Movie,” “Turbo” and “The Founder.”

We Are Lady Parts (Peacock)

Synopsis: A look at the highs and lows of the band members that make up a Muslim female punk band, Lady Parts.

Bio: Nida Manzoor was a winner at the BAFTA Awards and nominee at the Independent Spirit Awards and Gotham Awards for “We Are Lady Parts.” Her career has also included “Doctor Who,” “Dixi” and “Jamillah and Aladdin.”