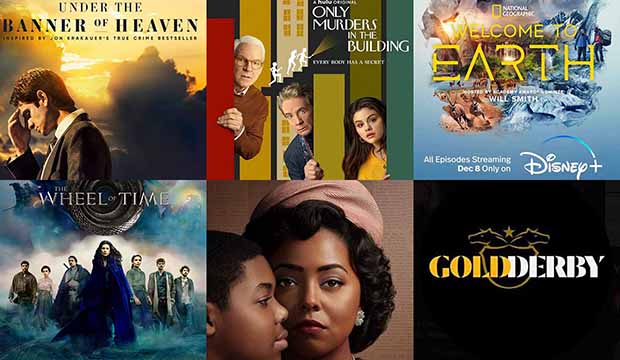 Five top TV sound editors and mixers will reveal secrets behind their projects when they join Gold Derby’s special “Meet the Experts” Q&A event with 2022 Emmy Awards contenders. They will participate in two video discussions to premiere on Tuesday, May 31, at 6:00 p.m. PT; 9:00 p.m. ET. We’ll have a one-on-one with our senior editor Daniel Montgomery and a roundtable chat with all of the group together.

Only Murders in the Building (Hulu)

Synopsis: Three strangers who share an obsession with true crime suddenly find themselves caught up in one.

Bio: Mathew Waters was a five-time Emmy winner for “Game of Thrones” among nine career nominations, also including ones for “The Underground Railroad” and “Lovecraft Country.” Motion Picture Sound Editors wins were for “Young Hercules” and “Only Murders in the Building” among five career nominations.

Under the Banner of Heaven (FX)

Synopsis: A devout detective’s faith is tested as he investigates a brutal murder seemingly connected to an esteemed Utah family’s spiral into LDS fundamentalism and their distrust in the government.

Bio: Michael J. Benavente was an Emmy winner for “Houdini.” A Motion Picture Sound Editors win were for “Houdini” with other nominations for “Spider-Man,” “Surf’s Up,” “Moneyball,” “Whiplash,” “Tut” and “My Dinner with Herve.”

Synopsis: Will Smith travels to the extreme ends of the earth from active volcanoes to deep ocean adventures.

Bio: Jay Price was a Motion Picture Sound Editors winner for “The Pride of Wade Ellison” and a nominee for “We Are Lady Parts” and “Welcome to Earth.”

The Wheel of Time (Amazon Prime)

Synopsis: Set in a high fantasy world where magic exists, but only some can access it, a woman named Moiraine crosses paths with five young men and women.

Bio: Matt Skelding was an Emmy winner for “Black Mirror” and a Motion Picture Sound Editors nominee for “The King’s Speech,” “Three Billboards Outside Ebbing, Missouri” and “The Alienist.” An MPSE win was for “Black Mirror.”

Women of the Movement (ABC)

Synopsis: An anthology series that chronicles the civil rights movement as told by the women behind it.