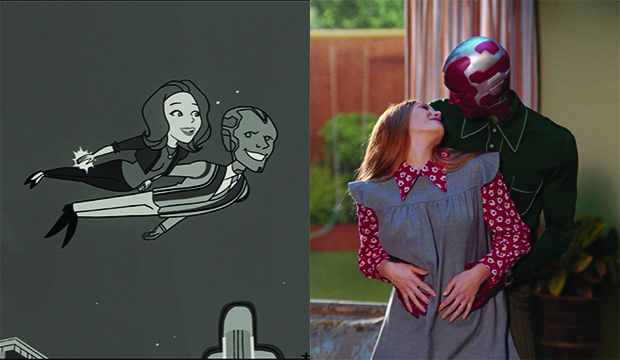 The various opening credits of “WandaVision,” each of which pay homage to a different decade in sitcom history, are one of the many highlights of the Marvel series, which stars Elizabeth Olsen and Paul Bettany as Wanda Maximoff and Vision, respectively. Every week fans of the show wait to see which programs the Disney+ series will pay homage to that week, and as we approach the series finale (season finale?), we’re looking back at the seven different credits sequences that have appeared throughout the season, each of which feature music and lyrics by Oscar-winning duo Kristen Anderson-Lopez and Robert Lopez.

We’re discussing what makes them great (or not so great), and digging into their ability to convey the style and tone of their respective decades. These are “WandaVision’”s opening credits, ranked.

It’s not that the opening credits to the series’ sixth episode are bad, per se, it’s that the episode is supposed to be paying homage to the sitcoms of the ’90s, but the TV show that the theme and the episode both pull the most from—”Malcolm in the Middle”—actually premiered in 2000. Yes, it was barely 2000 — the series premiered Jan. 9, 2000 — but technically that makes it a different decade, and we care a lot about dates around here.

Now, you can argue that in terms of pop culture Jan. 9, 2000, is basically the ‘90s, and you would be right. It’s not as if the themes or visual aesthetics of the ‘90s suddenly stopped existing at 11:59 p.m. on Dec. 31, 1999, and everything changed drastically on Jan. 1. But the fact remains that these credits are out of time, if you will. And while “Malcolm in the Middle” was a beloved comedy series, there might have been better ’90s sitcoms to choose from. It was a decade full of incredible comedies, and while “Friends,” “Frasier” and “Seinfeld,” three of the most iconic and influential ’90s sitcoms, would have been too obvious and not fit tonally with the episode, there were a lot of options to choose from here. This one felt a little uninspired.

Visually and tonally the 1950s-inspired credits of the series premiere are spot-on for the decade in question — Vision floating through the ottoman is a direct reference to “The Dick Van Dyke Show,” which was clearly one of the biggest influences on this episode, along with “I Love Lucy” (yes, “The Dick Van Dyke Show” premiered in 1961, but ’60s sitcoms were very much an evolution of the ’50s mold). And while it was a good starting point and we all enjoyed it very much at the time (those of who like “The Dick Van Dyke Show,” at least), the truth is that, much like television itself, “WandaVision” was able to do more as it progressed and moved through the decades, improving upon this first outing as it went. So there’s nothing wrong with it — you could call it a classic nod to a classic era — but the truth is what came later was simply more exciting.

The 1970s have been spoofed a lot in pop culture. Television and film are already full of nods to the memorable decade — hell, Fox aired “That ’70s Show” for eight seasons in the late ’90s and early 2000s. Maybe that’s why this ’70s-inspired opening credit sequence, which took some of its music cues from the opening credits to “The Partridge Family” and stylish visuals from “The Brady Bunch,” feels a little underwhelming, as fun and bright as it ultimately is. Still, we will say that theme music is pretty catchy.

The opening credits of the show’s seventh episode pulled heavily from “The Office” for the theme music and “Happy Endings” for the visuals, swapping out the instances of the word “happy” in the images for “Wanda.” Meanwhile, the episode itself was a full-on pastiche of “Modern Family.” This one seems easier than some of the others — it’s instrumental, so there aren’t any lyrics, for instance — but it was no less effective at conveying what it meant to. Plus, given how recent these shows are, and the fact that a large swath of television in the last two decades has abandoned opening credits in favor of a simple title card meant that these references were more instantly recognizable to most of the show’s viewing audience.

Combining the painting-in-progress style of the opening credits of “Family Ties” with “Growing Pains’” famous “photos of the cast as they grew up” montage made for the perfect homage to TV shows from the ’80s. The theme song was on-point too, perfectly capturing the more sentimental intros that seemed to dominate that decade. But if you look closely, there is also a nod to “Full House,” which starred Olsen’s older twin sisters, Mary-Kate and Ashley Olsen. While many people tend to think of the combined-family series as a ‘90s show, since the majority of its aired in that decade, the show premiered in 1987, making it a prime candidate here. There was a lot that had to come together to make this one work, and the creative team absolutely nailed it.

The opening credits to the second episode were heavily influenced by the Emmy Award-winning sitcom “Bewitched,” which premiered in 1964 and ran for eight seasons. Although the lyrics to the theme song are relatively simple — mostly just the word “WandaVision” repeated over and over — it’s the way they are paired with the black-and-white animation and jaunty theme music, both of which pay homage to from the opening credits of “Bewitched,” that makes it stand out. And given that both shows revolve around a witch trying to live a normal suburban life, it makes sense for “WandaVision” to pay tribute to “Bewitched” in this way.

And if you’re gunning to appear on “Jeopardy!” one day, you might also be interested to know the house in which Agatha Harkness (Kathryn Hahn) lives on “WandaVision” is also the Stephens house from “Bewitched.” Just something to keep in your back pocket for later.

Technically, the “Agatha All Along” credits, which feature vocals from Hahn herself, is not paying homage to a decade (they are riffs of the themes of “The Munsters” and “The Addams Family”), nor are they for the show within the show the way all of the other credit sequences on this ranking are, but damn is that song catchy as hell. There’s no doubt that this is the credit sequence to beat. And it wasn’t even the episode’s opening credits but a well-placed kicker that revealed Agatha was behind a lot of what went on Westview, which made it incredibly fun and serve the narrative.

The finale of “WandaVision” will be released Friday, March 5 on Disney+.