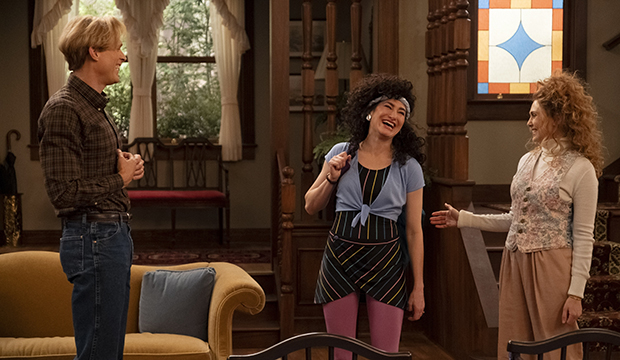 Last summer, “The Mandalorian” crash-landed into the middle of the Emmy race, earning 15 nominations, including one for Best Drama Series, and walking away with seven awards when all was said and done. Now, some might say it is a bit early to already be thinking about this year’s Emmy race, but that’s what we’re here for, and the big question on everyone’s mind right now is: Can “WandaVision” follow in the “Star Wars” series’ footsteps and help Marvel break into the TV awards space? It certainly seems possible, and even likely.

“WandaVision” stars Paul Bettany and Elizabeth Olsen as Vision and Wanda Maximoff, respectively. An homage to classic sitcoms wrapped inside a compelling Marvel puzzle that grows in size and scope each week, the Disney+ series may have started out slowly as it set the stage with the show-within-the-show, but it has quickly proven itself to be one of the best TV shows of 2021, balancing comedy with Marvel’s familiar brand of heroics. And while series creator and head writer Jac Schaeffer and series director Matt Shakman deserve a lot of credit for creating a unique tone and style for the Marvel Cinematic Universe’s first official foray into TV, the performances at the center of the show elevate the already addictive material.

The nature of Marvel’s blockbuster films is such that most of the franchise’s characters exist in the periphery of a few powerful white men, at least in the first three phases. While Robert Downey Jr., Chris Evans and Chris Hemsworth received ample screen time as their characters — Tony Stark, Steve Rogers and Thor, respectively — worked through their emotional baggage in between taking on various celestial threats, characters like Wanda and Vision were relegated to the sidelines, existing in the quiet moments in between the action sequences that punctuated the films.

SEE Is ‘WandaVision’ setting the stage for the Fantastic Four?

By the time “Avengers: Infinity War” (2018) came around, the films had to service many different characters from several film franchises. This means that with the exception of one or two scenes in the films, “WandaVision” is the first time Olsen and Bettany really get to stretch their muscles and dig into the emotional development of their characters or focus on something beyond the powers that got them added to the the Avengers’ roster (even if Marvel conveniently found ways to make them appear weaker than they were).

Bettany’s performance as Vision, who is a synthezoid (an android with a synthetic body), has been full of springy energy since the first episode, a likely byproduct of the character trying to embrace a more human existence while living in the suburbs of Westview. This has allowed the British actor, who many know from his dramatic work even though “A Knight’s Tale” (2001) exists, to showcase his excellent comedic skills, like when Vision accidentally swallows gum in the second episode and Bettany hilariously portrays him as a drunk.

Olsen’s performance as Wanda is more subdued, driven by the character’s inherent grief even if she doesn’t necessarily realize or acknowledge the truth. Olsen easily slips between the character’s warm, welcoming facade when interacting with the neighbors and the steely, cold persona of the character when she or her happy existence is threatened, but her even-keeled performance balances out Bettany’s more frantic energy, which has become less and less a source of humor as the character has become driven more by fear as the show has progressed. Regardless, their dynamic ultimately creates a harmonious stability so that the show never feels like it’s about to tumble off a cliff or spin off its axis.

Meanwhile, Kathryn Hahn, the secret weapon of every project she’s ever appeared in, flits effortlessly in and out of scenes as the couple’s neighbor Agnes, acting like the extra whipped cream on an already stacked dessert plate. They’re all giving award-worthy performances in a show that’s upending the MCU as we know it, further proving that stories about costumed superheroes can feel grounded and familiar by tackling universally understood concepts. But at the end of the day, can the actors and the show itself compete at the Emmys?

Like “The Mandalorian,” “WandaVision” will likely do very well in the craft and technical categories, given the tremendous work that goes into producing each episode that covers a different decade of sitcom history. It should easily pick up nominations for special visual effects, costuming, stunt coordination and production design, just to name a few. Where the show will need to work a bit harder to earn bids is in the major limited series categories.

There was a time when the limited races were less competitive than comedy and drama, but that isn’t necessarily true anymore. Hahn stands a good chance of scoring a supporting actress nomination, but Olsen and Bettany will be fighting an uphill battle. As it stands, Olsen will be competing against frontrunner Anya Taylor-Joy of “The Queen’s Gambit,” as well as Nicole Kidman of “The Undoing” and Michaela Coel of “I May Destroy You.” There are also Cynthia Erivo of “Genius: Aretha” and Kate Winslet of “Mare of Easttown,” whose shows premiere in the spring. Meanwhile, Bettany will be going up against the likes of Ethan Hawke of “The Good Lord Bird,” Hugh Grant of “The Undoing,” Bryan Cranston of “Your Honor” and Jeff Daniels of “The Comey Rule,” among others.

As for the series itself, the limited series race is definitely more competitive now that more networks and streaming services are producing limited series and anthologies. And there’s a minor worry that with three Marvel series being eligible this year (“The Falcon and the Winter Soldier” debuts March 19 while “Loki” is slated to premiere in May), saturation in the category could potentially make it harder for any one of them to truly succeed. But “WandaVision” has something its fellow Marvel brethren do not: It’s unlike anything anyone has ever seen before.

A unique series that slides through the decades with ease, “WandaVision” is a high-concept show that taps into raw human emotion and suffering to offer Emmy voters more to chew on than just the high-powered action that seems to drive much of “The Falcon and the Winter Soldier” (“Loki” remains shrouded in mystery at this point). So of all three series, “WandaVision” certainly stands out. It’s not on the same narrative level of, say, “Watchmen,” but with “The Mandalorian” having already proven that well-known, popular franchises on Disney+ can break through at the Emmys, “WandaVision” stands a decent chance of following in its footsteps.